Over the last few years the phrase “found footage” became synonymous with “not very good at all” – especially in Hollywood. While there are some amateur projects framed around this paradigm that are surprisingly decent, big budget productions using it tend to be miserable failures. Limiting yourself to a single camera and POV perspective is very limiting, too much shaky cam makes the audience sick, and directors too often rely on it as a crutch rather than an interesting storytelling device.

Chronicle does something unique with the medium. It steps away from the “single camera” approach and incorporates multiple points of view into their narrative. While they still maintain the “found footage” format, they sort of imply the footage was edited and spliced from many sources. So there are two camera toting characters, multiple shots taken from various security cameras, footage taken by by-standers and random passers by on their phones and iPads. Thus the title – the film you end up watching is essentially a chronicle of events that led to the rise of the downfall of the protagonists. This is a move in the right direction, and an I hope other people making find footage type features will take cue and incorporate this methodology into their work.

But Chronicle does more than that. Since it is a movie about bunch of kids who inexplicably gain awesome telekinetic powers, the camera does not need to be hand-held all the time. One of the three protagonists quickly learns to control his camera with his mind, giving it a very wide range of movement. Sometimes it floats over his shoulder, sometimes it moves away for wide panning shots, sometimes he floats it into the sky and shoots from above. In the incredible, action-packed finale he actually “force pulls” phones of bunch of bystanders in order to replace his lost camera. It is on of the first movies in quite a while that uses the find footage methodology in a clever and innovative way. 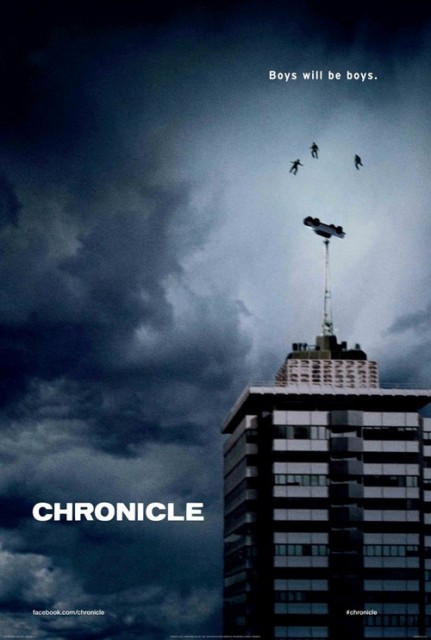 The story itself is quite decent. I have heard it described as a western take on Akira, minus the creepy progeria babies and the infamous human amoeba scene. And you know what? I would agree. It is a coming of age story about three high school kids that are suddenly transformed in some unknown, unexplained way into superheroes of sorts. At first they use their powers mostly for fun and mischief, but their strength and potential grows every day until it becomes too much to bear. Eventually one of the kids cracks under the pressure, and you get a finale very similar to that in Akira, prior to the transformation into the bloated, city consuming monstrosity.

The characters are likable, though a bit stereotypical. You got a star football player, an aloof cool kid and a nerd with an abusive father and a dying mother bonding together over a shared secret. You can figure out which one of them is going to do a face-heel-turn quite early on, but the journey there is still pretty well handled. The transformation of the subdued, shy introvert into an “apex predator”, force of nature grade super-villain is pretty fluid, and doesn’t seem forced or hammed in. It just works.

The film has some very good action scenes. The finale is possibly the most awesome super-powered battle I have seen on the silver screen yet, and Avengers will have to bend over backwards to top it. The found footage angle gives the movie a very intimate feel, which works very well considering the subject matter. When watching it, you feel that you are “in on the secret” and that you are really given a window into their private lives. It is one of the few features where this method of filming seems justified. It is a storytelling device rather than a gimmick or a crutch. Granted, it probably could have been shot in a more traditional way without sacrificing much of the story, the mood or the tone, but whatever. They used the medium well.

Is is worth watching? Yes it is. It is by no means a masterpiece, but it is a really cool take on the popular superhero genre. The premise is very close to the core concepts in Akira, and therefore the movie has a very solid backbone on which it builds an interesting story about three young men who gained powers they don’t know how to handle. Definitely check it out when you get a chance.