This post goes out to all the creative critters toiling in the depths of the information web-way known as the Internet. Yes, I’m talking to you aspiring writers, critics, bloggers and word smiths. Talk to me about your tool of the trade. What do you use to do your craft? What tool to you employ to record your thoughts in the form of character strings written into computer memory? How do you put your minds toil into silicone repository trapped inside your external thinking box people call a computer, but which long ago became a part of your brain?

You use Microsoft Word, don’t you? Not only that, you hate the damn thing.

How do I know? Well, this is a two part question. How do I know you use Microsoft Word? Because that’s what everyone uses. It’s what everyone knows how to use. And not because it is a good tool for the task. Microsoft word’s popularity is in large part due to memetic inception. I’m not talking about an internet meme in the form of an image with macro text. I’m talking about meme as a concept that predates the internet – a brain bug, a virally spreading datum that infects minds and takes hold. Every marketing specialist out there is currently working to create one of these – and if they are not, or don’t know about memes then they are simply horrible at their jobs.

Let me give you an example of a marketing meme: have you heard that Macs are better for graphic design? I’m sure you did. Can you explain to me how they are better? I’m sure you can’t. No one can. Hell, I own both Mac and PC machines and I’m fairly interested in how they work, how they differ and how they can be tweaked, and I could not tell you how the hell my MacBook Pro would be any better at running Photoshop than my Windows PC. There is just no empirical difference in how these machines handle visual editing software – mac has neither a hardware edge, nor does it have exclusive software that could make it a better platform. They are just about the same. But people still assume… No, they know – they are convinced – that Macs are better at graphics. It is a meme. It is a brain bug. It is a thing that people repeat, without understanding and reinforce via repetition.

Microsoft has launched a similar meme at some point in the past. They somehow convinced everyone that you can’t write anything without Microsoft word. Students need it for homeworks and creative people need it to write their stuff. But, just like the mac fable, this is also not true. Just think about it. How much of the text you consume on a daily basis is in Microsoft Word format? Everything you read on the web is HTML – a variety of plain text. Most documents you download from the web are in PDF. If you publish anything for the web, you know that most bloging or content management systems actually dislike word, and prefer you to type into (or paste into) a plain text input box.

As a internet society, as an electronic mind share we are collectively moving away from Word as the main data carrier format. And yet, the meme persists. A lot of people still assume that you need Word. That storing plain text files on your hard drive is somehow not kosher, that it is somehow not correct. So even if their notes contain no formatting, and nothing but plain text, they still wrap them in a proprietary .DOCX package, just to be safe. Why? Because that’s what you do. That’s what everyone does. That’s the way. There is no reason behind it. No logic. No deeper understanding. You just word it up, because you do.

How do I know you hate it? Well, everyone does. There is not a single person in the world that loves Microsoft Office. There are people out there that tolerate it – who are willing to put up with it and forgive it’s flaws. But they don’t love it. There is not a single person in this universe who loves Word the way some folks out there love Vim or Emacs. All you have to do to verify this is to hang out around forums and communities devoted to these particular programs. Just not the tone of most of the posts. In Microsoft Office forums the general tone is more or less:

“Guys, I need help to make this POS software do what I need it to do before I chuck this computer out the window.”

The general tone of most posts on Vim/Emacs forum is more along the lines of:

“OMG, look what I just figured out! This is like the best thing ever! I’ll be so productive with this. This editor rules!”

Attitude towards Word range between seething hate, and begrudging tolerance. There is no love there though. Not by a long shot. If you think you love word, you are mistaken. Do you love it as much as you would love a favorite pet? Do you truly enjoy working in it? Has it never failed you, never frustrated you and never let you down? Cause that’s my personal relationship with Vim – it’s lime my own personal Rick Astley. I know it’s never gonna let me down.

So now that we established that you hate your main work tool, let’s talk about a better way. Yes, there is a better way. There is a light at the end of the tunnel. I mentioned this in my self publishing article: ditch Word, learn Markdown.

Woha, you just learned Markdown faster than Keanu Reves learned Kung-Fu in that one movie. There is a little bit more to it, but not much. The rules are so simple, and so intuitive you pretty much can’t mess it up.

Next, you ditch that bulky, sluggish and finicky old MS Word and pick a plain text editor you like. You are writer and not a geek, so I will not push Vim or Emacs on you. There is this new fad amongst your people though – writers, creatives and the like: distraction free writing environments. There are dozens full screen editors out there that can deliver a powerful dose of creative zen to your cranium. Just to name a few:

Or you could go for something more traditional – like for example Sublime Text. At the end of the day, it doesn’t matter. Once you wean yourself of MS Word you will discover a new found freedom: your writing and your data will no longer depend on one editor from a single software vendor. Your writing will be liberated from the oppressive tyranny of Microsoft. This means you will be able to experiment with a lot of different editors, and pick your favorite one. Or change them every other day. Or have an editor rotation. Or whatever. Freedom is great, you should try it.

You will now save your documents as .txt or .mkd or .markdown – it doesn’t really matter. They will be neat, human readable and perfectly suitable for conversion to other formats. By default markdown was designed to be converted to HTML, but fear not – there are tools that let you turn your files into word documents of PDF files just as easily. You basically need just one tool:

Grab it, install it. I’ll wait.

What is that? Why are you crying? Stop being a little bitch. I said I will hook you up, what is the problem now?

“But Luke, this panda thing is all command line and shit! I thought it will have a GUI. Command line is scary, ugly and it smells. I’m gonna go back to Word now. This is stupid!”

Fine, go back to Word which you hate. Crawl back to the thing that hurt you and beg it to take you back. Command line scares you that much? Fine. I will make it go away. But we are keeping Pandoc.

Pandoc is a really great tool, sadly it’s not what I would call User Friendly. It was made by geeks and for geeks so you have to excuse the lack of UI. We generally don’t have any use for such thing. But I know that in the land of the End User, GUI is king. So I will make you one:

Download that zip file, extract it and double click on the .reg file inside. In case you are interested how it works, here is the contents of that file:

If you can’t read Windows Registry merge files, here is what it will do: it will add two new items to your right click context menu. From now on, when you right click on a file, you will see something like this: 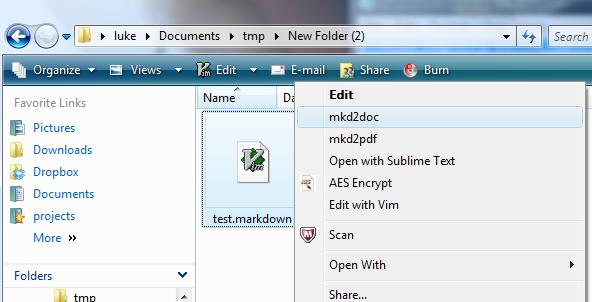 These buttons do exactly what you suspect they will do:

The new file will be placed in the same directory like this: 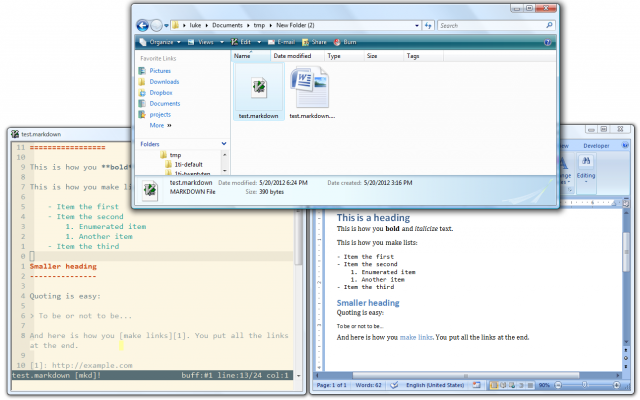 Other than that, it should work. I chose DOC and PDF because those are the two most popular, most requested file formats that your editor and/or publisher may want to see your files in. PanDoc can convert Markdown to dozens of other formats but I did not want to clutter your context menu with too much garbage you will never use. I figured Doc and PDF were safe choices.

Now, dear creative soul you should be armed with enough knowledge and enough software tools to wean yourself away from Word. I highly recommend you try it. Download Pandoc, install my registry script and join the ranks of plain text enthusiasts. Mark it down like a pro.

This entry was posted in technology and tagged wysiwyg. Bookmark the permalink.


19 Responses to Markdown for Muggles