When you reach a certain age, the question “what would you like for your birthday” becomes more or less meaningless. Being an adult with disposable income, you can easily buy all the things you “need” (like new external hard drive for backups, new fancy mouse, etc..) and all the reasonably priced things you “sort of want” (eg. half the stuff featured at /r/ShutUpAndTakeMyMoney). The only stuff that you won’t impulse-buy are expensive, luxury items – such as an iPad for example.

Personally, I don’t really need an iPad. I have a desktop that is fairly good at running video games, a laptop that is pretty good at being a laptop and letting me launch vim and write blog entries while away from my desk, and an iPhone that is my mobile internet platform. There is just no reason why I would need a tablet computer at this moment, other than it just being a cool toy. There are a lot of people out there that use these devices as laptop substitutes, but I don’t think I could do that. You see, I’m not a consumer – I’m a creator. I make content. I blog, I tinker and I program. If I’m sitting at a computer, chances are I’m not just goofing off watching Youtubes but actually engaging in the process of content creation. This is also why I get cranky if you insist on interrupting me. But I digress.

An iPad is not really a good creation platform. Not yet at least. It is a device made almost exclusively for consumption. It works great as an e-book reader, a mobile a web browser, RSS reader, internet video watching device and etc. But not something you would use to make things. Typing on touch screen sucks and lack of a real file system makes storing and moving around your content rather difficult and limited. Locked ecosystem means you can’t easily create executables or scripts. It is more or less a toy. And a rather expensive one at that. But, I still kinda wanted one for consumption related purposes.

This year I basically told everyone to give me money, and promptly blew all of it on a purely consumer-driven device. And you know what? It was money well spent. 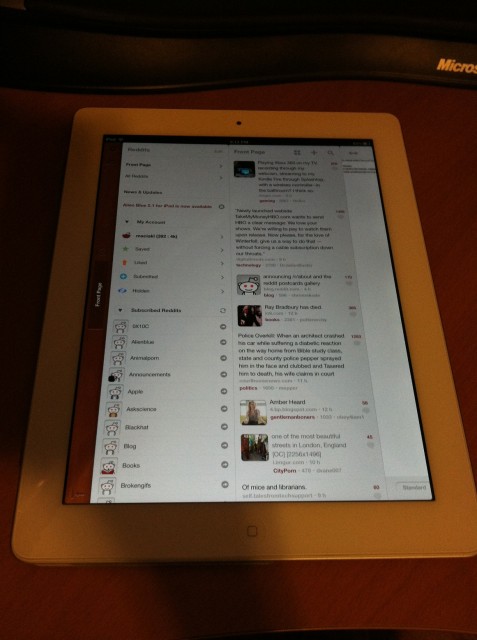 Isn’t an iPad just a big iPhone though? Well, it is, and it isn’t. Because of it’s size, the device actually supports a wider range of touch gestures than the phone and feels more like one of these “future of user interfaces” videos. The twitter app for example uses a full range of motions – two finger swipes, pinch motions and etc. It really does feel like playing with a deck of cards that’s trapped under the glass. It works very well.

I’m quite impressed with the Retina display. I think I tweeted about it a few times, but the image quality on the device is quite amazing. Very crisp and sharp. I was comparing it to the display on my MBP and my 23″ ASUS monitor and found them both fuzzier. If anything, the device is worth buying just for the display alone.

I’m also quite impressed with the battery life. I got on Wednesday, and even though I used it quite extensively (watched bunch of videos every evening, reddited and tweeted from it during the day) I didn’t have to charge it until Sunday evening – and even then it still had 30% of charge left. I could have probably gotten another day out of it. Maybe I’m using it wrong – don’t know. I haven’t really played games on it or used skype extensively which are the things that tend to drain my iPhone battery the most. 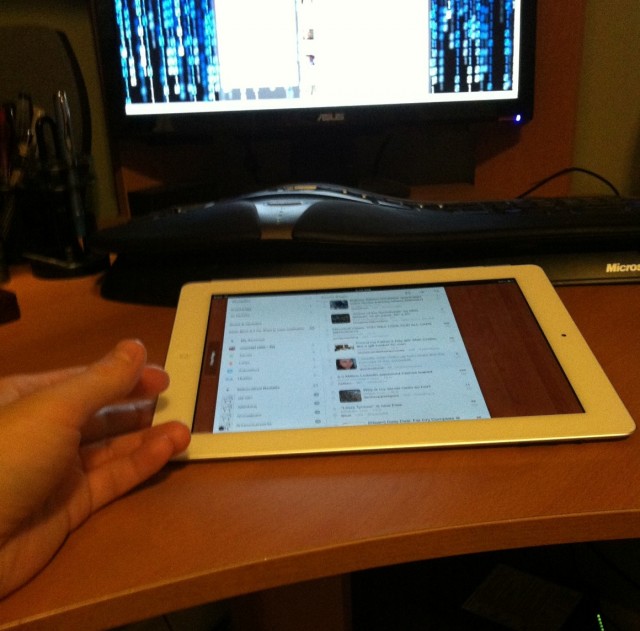 It’s rather fast, responsive and works great for internet browsing, twitter/facebook and as a dedicated Alien Blue device. I’ve been messing around with it for a few days now and I must say it makes a good addition to my assortment of computing devices. I might have not needed one, but now that I have it, I really like the seamless mobile access to the web. Let me give you a use case to give you an idea of what I’m talking about.

Let’s say I’m sitting on the couch watching a movie and suddenly remembered I needed to do something on the interwebs. I could use my phone which is in my pocket, but might need to fill out a web form or two, and the tiny screen will make that into a chore. I could also grab my laptop and for the purpose of this exercise let’s say it is sitting somewhere within my reach. Still, I have to grab it, crack it open, log in, navigate to where I need to go, and etc. And if the laptop happens to be off, I might need to wait a few minutes for it to boot.

The iPad is a nice device that fills the niche in-between. It is perfect for situations where you need something with a bigger screen than the iPhone, but don’t necessarily need to boot a full-blown general purpose operating system. Just grab it, peel the cover off and go.

And yes, I invested in one of them smart cover things: 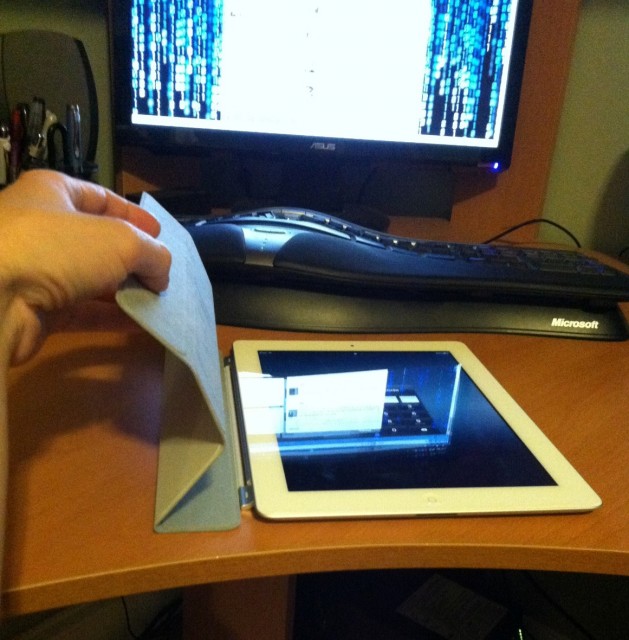 It works quite well. If you roll it up into a triangle stand, and put the device on a flat surface typing is actually not half bad. When you are not using it as a stand you can fold it in half, and lay it flat against the back where it provides an extra friction grip surface.

Before you correct me, let me mention that there do seem to be ways to actually make stuff on iPad. There is a handful of apps that actually make it into a little bit more than a convenient web browser wrapped in shiny plastic:

Still, there are not many, and without a mouse and a keyboard your creativity tends to be stranded and these apps are not nearly as powerful as their desktop equivalents. Well, except maybe Paper which seems to be designed specifically for this type of a device. I’m kinda tempted to buy a cheapo stylus to see if I can sketch and/or take hard written notes on it. To tell you the truth, something like the iPad, Paper app and a stylus was all I wanted when I was still in school – an elegant, seamless way to digitize my class notes. But I digress.

What other apps are there that let you be creative and productive on the iPad? Are you an iPad owner? What are the must-have apps, and/or tips and tricks I should know about? Let me know in the comments.