Why Webmails is the Only Working Email Solution

On Monday I wrote about my experimental shift to command line email clients. Or rather about being unhappy about the available command line client choices. Still, I sucked it up, configured Pine (well Apline but whatever) for my work IMAP and SMTP accounts and started using it. Guess what? Everything went better than expected.

Why not Mutt? Because Mutt didn’t scale. Mutt was designed to be a POP client first, whereas Pine was designed specifically for IMAP and it shows. Mutt takes about 3 minutes to “index” my inbox every time I start it. Pine opens in a fraction of a second.

Yes, Pine can be clunky at times. They keyboard shortcuts are kinda weird but they are not horrible. Pico is an abysmal editor, but you can tell it to use Vim or Emacs instead so this becomes a non-issue.

Best feature: Pine it is blazing fast. Hands down it beats the Webmail, Outlook, Thunderbird, and even Kmail. I just type in pine, and boom – my emails are on the screen. Every other client has to do a warm-up lap around the CPU, loading graphical widgets and whatnot. I hit R and boom, I’m composing email in vim.

I usually run my Pine instance inside Tmux so I can easily split my screen into two or more panes with one key-stroke. Or open a background “tab” session. As long as I stay within that terminal I can work without ever touching a mouse. You can’t do that with graphical email clients. There is usually a lot of context switching. You usually need a mouse to switch between the panes within the client, different actions pop up mouse driven dialogs and whenever you need to drop down to terminal you need to mouse your way to it.

The great thing about this is that a lot of my daily tasks can be done directly from the command line or using command line apps. Eliminating mouse out of the equation makes me about twice or three times as efficient. It more than makes up for the clunkiness of Pine. 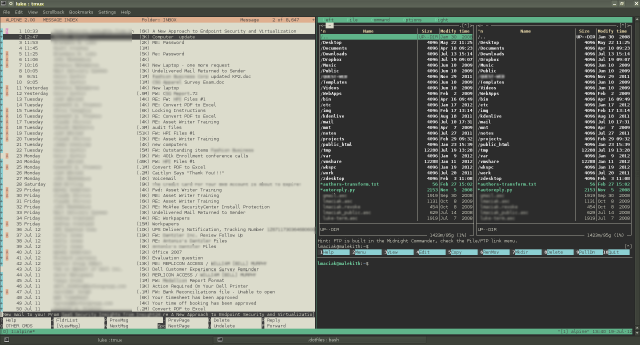 Here is an example of how my email looks at the moment. I’m using Pine and Midnight Commander running side by side inside of Tmux.

After about a week of working like this I am actually finding myself working faster and being more productive. Also, the bare-bones layout of Pine inbox actually forces me to proactively clean and organize my inbox. Previously I would just let random semi-spammy emails languish in the inbox. Nowadays I flag and delete them with great prejudice.

So my conclusion is that Pine actually works quite well as a primary email client if you are willing to put a little work into it. It actually works very well with Zimbra – it lets me have a light, responsive and simple client, and a very powerful back-end engine that does a lot of filtering, spam-tagging and managing behind the scenes on the server side.

So what’s up with the title of this post? Well, one day this week I ended up working from home and pine stopped working. Why? Because my residential ISP blocks port 25, 587 and the equivalent ssl ports used by SMTP servers. For years now Internet Service Providers have been clamping down on outbound SMTP traffic as a spam counter-measure. These days most networks only allow email relaying through their own server, and only with authentication. Which really, really sucks if you have a laptop with a pop/imap + smtp client.

I wrote about this very problem back in 2008. I managed to forget how big of an issue this was for us back then. But believe me, it was a major, major thing. More or less it was the reason why we dropped standard pop/smtp setup and migrated to Zimbra. Yes, imagine that – the management was so fed up with non-functioning email that they actually decided to move to throw money at the problem.

Our switch was more or less transparent to users, because we hooked them up with a Zimbra Outlook Connector plugin. From their perspective the only change was that their Outlook now actually fucking worked at their houses, in the local coffee shops and at client locations.

How come ZCO works and standard SMTP does not? Because the folks at Zimbra pretty much gave up trying to make SMTP work. Instead trying to negotiate the SMTP minefield they decided to sync. So ZCO syncs your Outlook mailboxes via HTTPS and the server does the actual sending. As a result, only places with massively annoying firewalls give our employees email problems these days.

We have been free of this issue for so long that I forgot it even existed until I decided to use Pine outside of my office.

And yes, there are workarounds. I could change my SMTP server to the one provided by my ISP but that would not exactly be kosher security wise. I could probably establish some port tunneling and shunt my outbound SMTP traffic directly to my work network over ssh but that seems like a roundabout way of doing things.

The simplest, most direct solution to the problem at hand is to just stop fucking around log into the corporate webemail portal. Wemail just works.

Webmail is about the only solution that will always just work in an increasingly mobile environments. All email clients suck, but the main strength of webmail is that it will never actually break and it requires no setup. I knew that for years. I wrote about this on this very blog. I have been observing the exodus away from raw POP and IMAP to webmail portals since about 2007. But I forget, because I’m a power user.

So, what email client do you use right now? What is your email setup?

Oh, and before you ask my Midnight Commander theme can be stolen from here.


10 Responses to Why Webmails is the Only Working Email Solution