Can video games art? This is a really dumb question. Of course they are. Or rather they can be. Anyone who would say no to this is wrong. Artists can choose to express themselves in just about any medium and this includes the interactive and the digital. Dismissing one for expression as invalid and unsuited to properly conveying creative ideas is silly.

That said, if you rephrase the question and ask whether or not the modern triple A mainstream releases are art, then no they are not. Or rather they are as much art as Michael Bay’s Transformers. They are commercial products first and foremost. They trade in the same distractions as Hollywood blockbusters: guns, sex and explosions. They are made to excite, titillate and provide the player with a quick adrenaline rush. There is absolutely nothing wrong with that, but there is usually not much artistry involved. These games are to be consumed as entertainment, and if they do contain some deeper meaning, or give you reasons for contemplation it is usually just a nice bonus.

Dear Esther is a little bit different. While it costs money, it is not a mainstream commercial product. While it is interactive, it has no game play. While it tells a compelling story, it has no real plot. It is a non-game – an interactive virtual experience. And if it is not art, then I’m not exactly sure what would it be.

I bought it during the summer Steam sale for about a buck, and I thought it was a dollar well spent. If nothing else, the game is absolutely gorgeous. The developers of this title (which started as Half Life 2 mod, but then turned into a full-fledged game) have a very keen eye for color, composition and contrast. What they did using the Source engine is both impressive and breath taking at the same time. Here is a snapshot from an early part of the game, where you ascend a hill and see a small building in the distance against an amazingly well designed sky box: 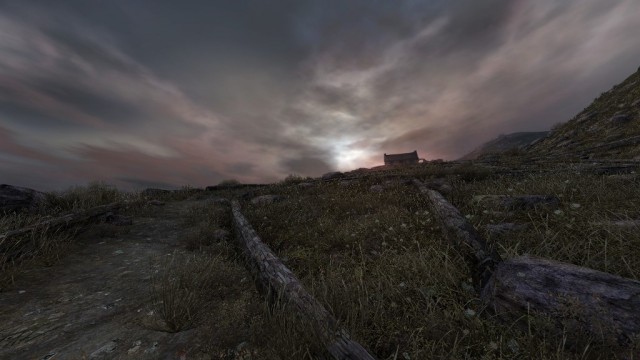 Check out this sky box!

Not shown in this picture, is the blinking beacon that provides the focal point of the game. It is almost always visible from all parts of the island and provides both a visual cue that helps you to orient yourself, but also a final goal. As a player you are drawn to it, and the game implies that the beacon is where you should be heading. But it is not just that – sometimes the beacon is part of the scenery, providing bits of color and contrast. Consider this location for example: 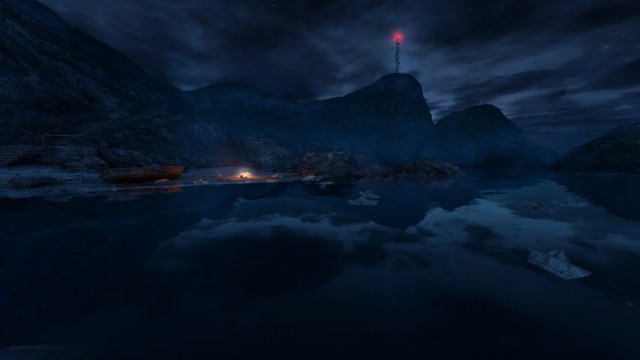 Note how the entire scene is dominated by deep blues, with the exception of the candle lit area on the shore, and the red beacon in the distance. These little areas of light provide focal points leading the player through the darkness. The developers chose to offer the player no traditional game play experience, but their masterful level design is a proof that they are no strangers to game play related concepts. The way they lead the player throughout the environment using visual cues such as buildings, colors, contrast and lighting shows they have spent considerable amount of time play testing and tweaking their levels. The game has no map and no compass and it features wide open spaces but I have never really felt lost because there was always something intriguing in my field of view. 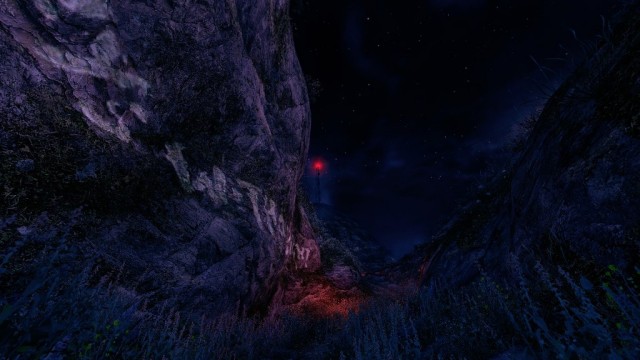 Another example of a really good use of color and cintrast

Here is another example of a location that is not only picturesque and beautiful but also well executed. This game contains some of the best night environments I have ever seen. Note how the vibrant colors make this environment light up, and how at the same time they line up to create a visually interesting path for the player. And I’m not even showing you the caves, which are just… Something else. Something to be experienced.

Combine these masterfully crafted visuals with excellent, but subtle sound-scape and sparsely used music and narration and you end up with something rather extraordinary. The writing is good – eloquent, poetic and dense with meaning. This part love letter, part confession and part diary of a troubled man is not easily digestible, but it stays with you. As the narrator rambles on and indulges in digressions you find out more and more about the island, it’s mysteries and the protagonist himself.

The entire thing is about an hour long interactive story. On the surface it kinda reminds me of The Path which I reviewed back in 2009. But The Path actually had game-like elements – items that needed to be collected and secrets that needed to be found. Dear Esther is much simpler and much more streamlined but also more casual. Unlike The Path which required the player to invest time and effort into exploration, Dear Esther strings you along and leads you by the hand most of the time. But I think that was a conscious choice – The Path style exploration would not be appropriate here. The linear, scripted progression was exactly the right way to tell this story.

You see, Dear Esther is about immersion. The slow trek though the picturesque environments, listening to an unreliable narrator ramble about random things is a way to make you part of the game world. Whether you want it or not, you become intrigued by the strange markings on the walls, and the frequent mentions of the caves and the mysteries that lie within. You drink the world in, the mood seeps into your bones and then it delivers the really powerful imagery in the final act. I don’t know about you but I found “the armada” to be heart breaking, beautiful and poetic. It added a striking visual imagery to the narration, and it probably wouldn’t work without all work that went into immersing me into this reality.

This game is not for everyone. But if you want to see some really good level design, and listen to an intriguing, deeply sad story then this is definitely a good way to spend an hour and a few bucks.

This entry was posted in video games and tagged interactive storytelling, review. Bookmark the permalink.