This fine morning KDE greeted me with a particularly nasty warning:

Do you think I’m low on space?

Seems like it is time for some spring cleanup… And by spring, I of course mean winter. But where to start?

Well, the best place is usually to nuke your temp files. There are many ways to do this, but my go-to tool is Bleach Bit. It is a multi-platform tool that does a remarkably decent job sweeping up garbage that crufts up linux filesystems without actually doing any major damage. Also, it is quite fast.

Unfortunately in my case, it only managed to free up about 300MB of space. That’s certainly bigger than 89MB of free space I had previously, but still not great.

Here is a question: what does it mean when deleting temp files makes almost no difference with respect to unused space on your hard drive? It means that all the space was eaten up by your activity – files you downloaded, software you installed and etc. So the first thing to do is to clean up your home directory.

If you are like me, you probably have one or more “dump” folders where you just shove random files you don’t feel like filing anywhere else. Mine are:

As a rule, it is usually safe for me to purge these directories outright when I’m running low on space. Whenever I find myself working on something inside ~/wkspc/ for more than a brief, fleeting instance, I usually move it to ~/projects/ and put it under source control. Everything else, is a fair game.

Sadly, nuking those folders gave me very meager results – probably because most garbage I download and generate on day to day basis is rather small. So where was all my space tied up? I decided to find out using du command:

This will give you a nice list of folders ordered by size that looks a bit like this: 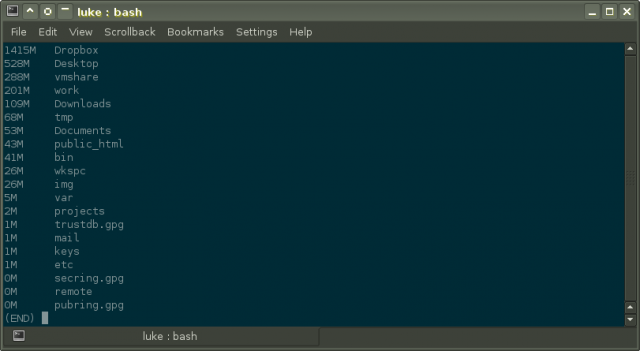 I actually took this screenshot after doing some cleanup, but you can sort of see how it works. The largest repositories of junk in my case are my Dropbox folder which I can’t really do much about, and my Desktop folder where I had a large directory of work related crap I did not want to get rid of. The rest of the directories looked fairly clean. And yet running df would show that / was 96% full.

Then I got another idea – my previous search explicitly excluded dot-files. So why not check them specifically:

Can you say jackpot? 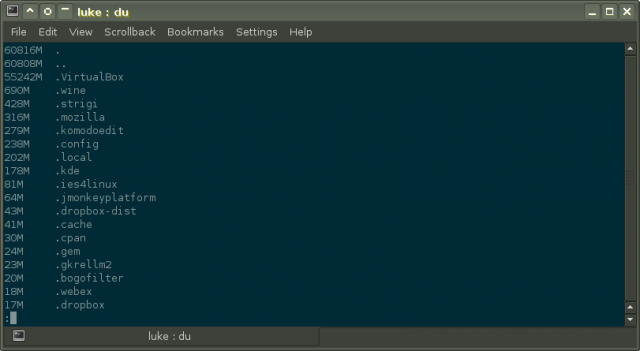 VirtualBox directory has grew to be over 50GB large. Not good! I immediately sprung to action, deleted bunch of old snapshots, dumped unused VDI files to an external hard drive and went to town compacting the current ones. How do you compact them you ask? Using the friendly

Actually if your VM runs a Windows OS, should follow the advice listed here:

For me, this yielded about 10-20% savings per VDI file, which was not insignificant. But since I was already in cleanup mode I decided to keep going.

Having deleted most things in ~ that I was willing to part with, I turned to software. I can be pretty bad about installing software. Often I will download and install packages that I use once, and never touch again. I’m especially fond of downloading web browsers, IDE’s and scripting language run-times just to see how they feel. Half of these things don’t need to take up space on my hard drive.

So I decided to generate a list of installed packages and order it by size: 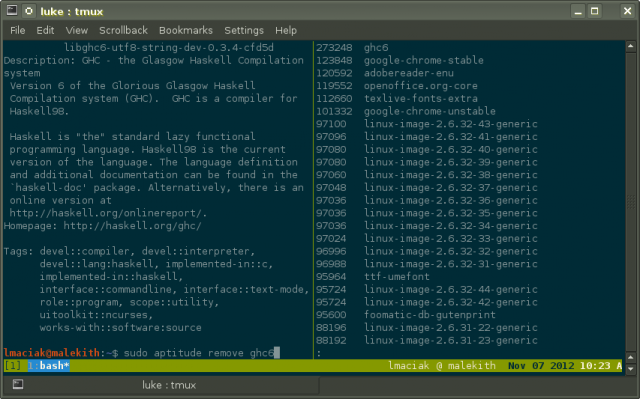 Use Tmux to make it easier

It seems that the biggest packages on my system were Haskell, Google Chrome, Open Office and… A shit-load of old kernel image files. See, this is the kind of thing that happens on Linux when you just let the OS upgrade itself whenever it wants. Every time there is a kernel security patch or an update apt leaves the old kernel version intact. This is good, because you can always revert to your old kernel version if the new one breaks everything and ruins your day. But after a while you get a long, long list of defunct kernel images and header files. You can actually see the entire list like this:

How do you clean this up? Well, you aptitude purge all the kernel files, except the current one. You can check what you are running right now via uname -r command. Then sit down, and prepare to type in a lot of package names…

Or use this script to generate a list of all installed kernel files, except the current one:

I can’t actually claim ownership of this one – this sed monstrosity was actually made by the folks at Ubuntu Genius blog. In fact, they went one step beyond showing you how to automatically purge these things in a single command:

In my case, the uninstallation took close to an hour to complete, and reclaimed over 8GB of space, without damaging anything important.

For a good measure I still went back and uninstalled useless things like extra web browsers, various ide’s, language runtimes and any GUI tools that haven’t been touched since I installed them. All in all I think this was a successful cleanup: 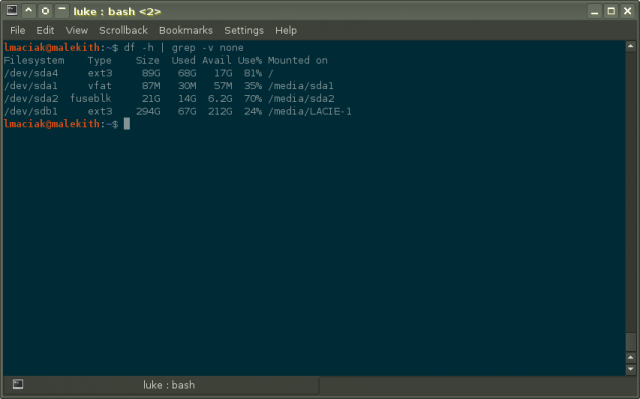 My / is now only at 81% with over 17G of free space. What do you think? Do you have any disk cleanup tips that you would like to share here? Let me know in the comments.

This entry was posted in sysadmin notes and tagged linux, ubuntu. Bookmark the permalink.