My Trolls Are Different

I’m having a lot of fun doing this whole reinventing fantasy races thing lately so I decided to do Trolls this time. What do we know about these creatures?

Well, in most settings Trolls are big, dumb and extremely dangerous. A trait very commonly attributed to them is spontaneous regeneration, and sometimes they turn to stone in direct sunlight. They also like to live under bridges for some strange reason. That is if you ignore the Warcraft universe where Trolls are actually closely related to Elves and also Jamaican.

So far I actually kinda like all of these features except the stone turning thing. Most setting already have another monster in that category which can be used to a much better effect: the Gargoyle. So I would nix the stone turning from my list of troll like things. I’m not especially fond of these particular monsters being dim witted and slow. Personally, I like my trolls to be at least somewhat intelligent. 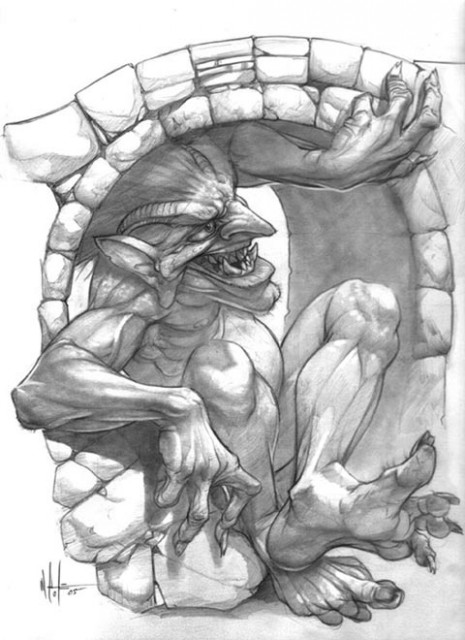 Let me put it this way – Trolls regenerate, right? If we define aging as cellular damage you accumulate over time, we could make a claim that Trolls probably don’t age in the same way other races do. So it is safe to say most Trolls won’t die of old age. They also are not very prone to accidental deaths. They are big enough to secure themselves a spot on the top of the food chain in most areas where they live and if they avoid dragons and other fantastic beasts they probably won’t get eaten. Falling from heights, losing limbs, getting impaled or crushed by falling trees is stuff they can just shrug off. Troll deaths are usually extremely violent affairs that involve excruciating amount of tissue damage inflicted by heavily armed adventures and also probably fire which is known to fuck up that regeneration thing. So barring an encounter with an adventuring party, a troll can probably live forever and accumulate lifetimes worth of experiences and reflections. Even if you are dumb as a rock, all these experiences add up.

Of course forever is a fucking long time to sit under a bridge, which brings me to my next point: Trolls are probably autistic. Or rather their psychological makeup parallels what we would now recognize as high functioning autistic type thinking. For them however this is a natural state. They are the ultimate introverts and loaners trapped in their own minds. And you can sort of figure out how that happened.

Trolls have evolved from large, highly territorial predator species. Because of their size and strength there was not much reason for them to develop social herd-like behavior so common amongst smaller races which evolved from pack hunters or grazers. Like most solitary predators they would come together to mate, but otherwise keep to their territory. They slowly picked up things like speech and tool use and developed loosely knit support groups when early humans, dwarves and elves started chucking spears at them. Then they stumbled onto the genetic mutation that fave them the regeneration powers, and that was it for Troll evolution. They just stopped dying, and the natural selection more or less stopped. From that point on, the only Trolls that would perish without passing on their genes were the stupid ones that would start shit with big monsters, or overestimate their chances of winning against a whole herd of small dudes with swords, shields and torches.

As a result, Trolls are antisocial by nature. It’s that big predator instinct which they never shrugged off. They just don’t like company and get irritated when someone encroaches on their territory. Left to their own devices, they are perfectly happy just sitting somewhere and counting things. Yeah, it’s a thing they like to do – they are like that vampire dude from the Sesame Street when it comes to that. Counting, sorting, arranging things – that’s their thing. So if you are walking around in the forest, and you suddenly see a pile sticks arranged by size and color you might want to get your health potions and your fireball spells ready very quick like. You are in troll county!

This is also the reason why Trolls get so obsessed with bridges. No matter how you cut it, a bridge is a fucking engineering wonder. Trolls recognize good engineering when they see it. They don’t particularly understand how a bridge holds together and so they can spend years studying them. They will count the bricks, study the placement of the posts, test it’s strength and try to figure out how it was done. A bridge is sort of a perfect spot for a Troll to be. There is usually a river there where they can fish for food (and also find colorful stones they can arrange by color), a big interesting structure that can be studied and pondered, and a nice overhang where you can find shade when it is hot, or some dry place to sleep when it rains. The only downside is the humans.

To a Troll, humans are these annoying little jerks without any manners. They just walk onto your territory without announcing themselves (which is not something you would do if you were a troll) make a lot of noise, and walk all over your precious bridge like it was theirs or something. Their only redeeming quality is that if you yell at them, or rough them up a bit (so they understand how rude it is to violate Trolls’ territory) they will usually give you some free shiny stuff to apologize.

Granted, Trolls that try to defend their bridge too much will sooner or later receive the pitchforks and torches treatment from the local village, or find themselves an objective of a quest given to one of them roaming adventuring parties. So the ones that do survive usually learn leave people alone. Some trolls actually figure out the whole bridge thing and learn how to maintain or even improve theirs. When they ask for a bridge toll, it is usually because they need money to buy bricks and mortar to fix something.

Humans often see Trolls as slow and dim-witted but this is not the case. They are just not social animals so they have not developed social intuition like we did. Trolls don’t really pick up on things like subtle body language or voice modulation as a mode for expressing intention or emotion. They are also not immersed in human culture so they do not readily understand rules of etiquette, idioms or jokes. In conversations they come off as rude, forceful and self centered. The longer a Troll lives, the better it gets at this sort of thing, but getting human interaction right takes practice – and practicing these things is probably their least favorite thing to do.

Trolls don’t usually form lasting social bonds. They usually seek out members of the opposite sex during their mating season, and usually go back to their own affairs afterwards. Females raise the kids until they are self-sufficient at which point they wander off and find their own place in the world. A Troll childhood will usually last a few decades during which it will learn most of what it’s mother knows – usually this involves rudimentary knowledge of few local languages, some bridge engineering and tool making skills and a lot of troll-math and troll-science theory which these beasts sort of reverse-engineer from principles.

So chances are that if you need someone with a knack for numbers you can find him living under your local bridge. There is a famous story about a wealthy merchant who hired a local troll to manage his books and records. In mere few months his business went from being near insolvency to record profits. That is until the merchant found some discrepancies in the books, and accused the troll of getting the math wrong. The Troll broke his back, cracked his skull and then threw him off the bridge – which is more or less how you express slight disagreement among the fast healing Troll kind. It was later shown that the Troll’s math was correct and the discrepancy was due to internal fraud.


9 Responses to My Trolls Are Different