Lately I have been entertaining myself playing DOTA2. I got a beta invite from one of the readers here (thank you sir!) and found it quite addictive. The game is currently F2P but in a closed beta so you need a key in order to play. I believe I don’t have any to give out, unless I was looking for them in the wrong places.

What is DOTA2 you ask? It’s actually hard to explain. Prior to this, I haven’t had any experience with this genre which is probably best explained as competitive RTS style RPG type thing. Which sounds weird. I actually had to RTFM and watch some videos to wrap my head around the game play concepts.

You know how Warcraft and Starcraft games used to have hero units that were beastly in combat and could be further buffed with skills and special items you could purchase after building special structures? Well, back in the day someone made a Warcraft 3 mod that sort of run with this idea. It removed all the tedious building and resource gathering, and instead gave each player a single hero to control. There was five heroes to a team, and their goal was to defend their own pre-built base, barracks and structures while at the same time attempting to destroy the enemy base. The barracks of each team would continuously spawn waves of creeps that would duke it out amongst themselves. Killing enemy creeps or heroes would yield experience and gold that could be used to purchase special skills or magic items respectively. 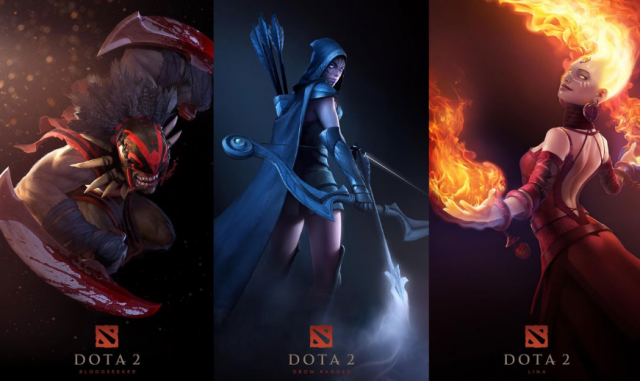 Defense of the Ancients 2

DOTA was immensely popular, but… You know, old. Fortunately good guy Valve took the project under their wings. DOTA2 is a stand-alone version of that old Warcraft 3 mode, implemented on the Source engine and no longer encumbered with Blizzard trademarks and intellectual property.

The game play is different from pretty much anything I have experienced up until this point. It definitely has and RTS vibe to it, but none of the things I hate about RTS games are present. Resource gathering is replaced by RPG style “grinding” (either farming creeps or ganking heroes). The focus is on leveling up your hero, and team combat and not on micromanaging units all across the map. The game is well balanced and actually designed to prevent players from using cheep-shot tactics in the style of early game zerg-rush. I must say I quite like this sort of thing.

It is fairly straightforward to learn, but difficult to master. It is basically just one map, 50-odd heroes, and about a few dozen magic items – but if you combine all these things together an unexpected level of complexity starts to emerge. The number of permutations, unexpected synergies and potent combinations is staggering. There are dozens of wikis, forums and communities out there devoted solely to discussing “hero builds” and discussing strategies.

It is probably important to mention that Valve built the game around an excellent match making service which actually tracks your game stats an attempts to pit you against player with roughly the same skill level as you. So far I have been playing mostly against people of the same skill level as me (ie. total n00bs). In fact, in my early games I had a distinctive edge against many of my opponents because I have played few dozen practice games against bots before I actually dared to face real people on the field of battle. Many of the folks I have played with freely admitted this was their very first or second game in their life. Of course I have also encountered really skilled players at that level too – mostly folks who have played original DOTA and already had a lot of the skills, habits and reflexes of veteran players.

As far as I can tell, there is a pretty vibrant professional circuit out there too. I’m really not very knowledgeable about that aspect of the game, so I won’t say much about it, but I can clearly see that it exists, and that it is much discussed. Needless to say, you know that a game has a serious depth if you open up a guide and it says something along the lines of “you probably shouldn’t try this, but here is an unorthodox, controversial play that you might see used in the pro tournaments.”

So, who here plays the game? What are your favorite heroes?

Me, I’m still fairly inexperienced and there are quite a few heroes I have not played at all. From my limited exposure however, the two of my favorites are Windrunner and Zeus. Both are ranged support heroes which is how I roll in DOTA – I prefer to keep my enemies at arms length, and I don’t really feel confided to be the main carry.

When I play the former, I tend to be the good guy support hero – I always buy the courier, I’m nice enough to put down a ward or two by the runes and tend to buy items that benefit the entire team in the fight by giving off mana/hp regen auras (like Basillus and Mekanism). If I have the gold, I usually get the shipstick at some point have an extra disable on hand if needed.

Windrunner is ridiculously flexible – she has a long range, extremely good escape mechanism, a really good disable (which can shackle and stun two heroes for about 5 seconds) and a pretty decent ultimate move that can do ridiculous amount of damage to a target, provided you can stand back and shoot for 20 seconds (great for picking apart towers). Her main disadvantage is that most of her skills are not point and click and actually require some careful positioning and aiming to land properly.

Zeus is much less flexible, so when I pick him I tend to be much less generous with my money. Mostly because I’m working towards the absolutely game-breaking combo of Scepter and Refresher Orb. Once you have this, you can use your ultimate skill to hit every hero on the map for redonculous amount of damage (augmented by the scepter) then refresh the cooldown with the orb, and do it again.

In one of the recent games I actually had this combo, plus bottled rune of double damage. The enemy team was pushing hard, so activated the rune, and two Turndergod’s Wrath’s later I had two new kills and two assists under my name. And then I died because the last man standing on the opposing team ripped my squishy mage type hero to shreds. Was worth it though.

How about you? Whose your absolute favorite hero build? What play style do you prefer? Do you go for ranged heroes, or do you like to get up close and personal?