In Part 4, I mentioned the Codeception test framework, but didn’t really get to use it because their page temporarily went down and I didn’t feel like trying to hunt down the documentation from third party sources. That outage seemed only to last about an hour, but by that time I was already finished with my post. Besides, it gives me more stuff to talk about today.

Note that it users the curl feature of PHP and hence I added that there as a prerequisite. This will make codeception available under the command codecept. Now that we have it installed globally, we have to bootstrap the test environment in our project folder:

This will create a tests folder and generate a lot of garbage inside. A clean test folder after issuing the bootstrap command usually looks like this: 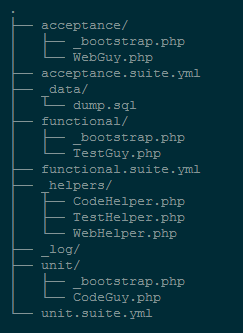 At the moment I’m mostly concerned with acceptance testing. Codeception has a unit testing module, which is built around PHPUnit. Their idea is to make writing tests simpler. I could adopt it, but it means I would have to re-write my tests in the Codeception syntax which is essentially just an abstraction layer. At this point it is a waste of time, so I can simply get rid of the unit, and functional modules and re-organize my test directory to look like this: 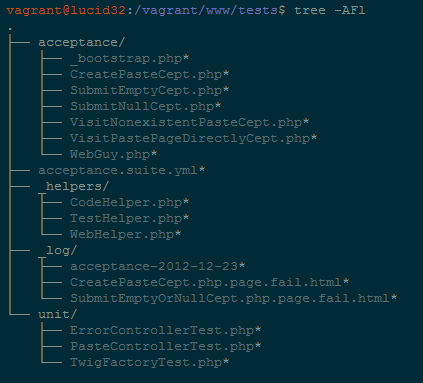 As you can see, I moved my unit tests to unit/ and created bunch of new tests in acceptance/. The nice thing about these frameworks is that PHPUnit will ignore all of the Codeception code, and Codeception will ignore PHPUnit tests so they can co-exist in the same directory.

To start writing Codeception tests we need to first change the project url in the acceptance.yaml file:

Watch out for the trailing slash in the URL – if you include it, it will mess you up later.

Once this is done, we can use the Codeception framework to generate a test code stub like this:

It will create a new file tests/acceptance/CreatePasteCept.php with some basic sample code. We can expand it to a full test like this:

As you can see, writing Codeception tests is actually much easier than creating PHPUnit classes. The syntax is very simple, but rather powerful. It actually uses Mink framework combined with Goutte Web Scraper to emulate text browser behavior in PHP. You could use Mink directly, but Codeception provides us with a very high level layer of abstraction which makes writing tests incredibly intuitive.

The testing layer is actually driven by PHPUnit so running the tests using the command codecept run will bring up a very familiar interface:

Let’s create another test – this time let’s hit up a non-existing page:

Assertions are done using the see() method, and the browsing is done using amOnPage(). The whole test takes shape of a narrative. You essentially describe what you want it to do, and it does it. Let’s do another one:

Here is the PHP code:

You actually do not need to use the generate:cept command to create these. Here is a little secret – any file you create in the acceptance/ folder, which has a name that ends in Cept.php will be processed when you run codecept run. If you don’t want a file to be processed, do not end it’s name in Cept – it’s that easy.

Here are two more quick tests – one to submit an empty string, expecting to see an error:

And here is a test to submit the form with a null value. Note that this could never really be tested using the browser, but it could potentially happen in production due to some hidden Hisenbug that was introduced somewhere else entirely:

Running multiple tests produces very nice output that looks like this – it’s actually prettier than the raw PHPUnit which just gives you dots as it tests, and gets kinda ugly when you set it into verbose mode:

Running these tests from the command line is much faster, and vastly more consistent and efficient than actually trying to manually test the application by hand via the browser. The tests always run the same, and take mere seconds whereas your manual tests may be inconsistent, and may not always cover all the important use cases.

Most of the time, you should not be writing this many tests at once. They should organically develop with your application. You get an idea how to structure your code, you write a unit test, you write the code, test it, then you write an acceptance test and plug the code into the app. Right now we’re just playing catch-up.

Our Pastebin is now fully functional, but it is lacking one of the distinct features of this class of applications – code highlighting. Implementing such a feature is a non-trivial task, but fortunately someone already did it for us. The great thing about working with a mature language such as PHP is that there is a huge number of free, open source packages and projects for just about any occasion.

GeSHi is a code highlighting library. It takes a string, parses it and gives it back to you, wrapped up in HTML that colorizes it according to a set of rules defined for particular programming language. It is actually the same engine I use in this blog to colorize my code snippets, so I know it works fairly well.

Like most projects, GeSHi is available via Composer. Granted, I believe the package listed there is actually a mirror, but for our purposes it works just as well. To add it to our project we simply need to add a single line to our composer.json file:

Now we run composer update and the code will be downloaded, and placed in vendor/ folder and registered with the Composer autoloader.

Using GeSHi is actually very simple. Let me give you an idea how it works with a little snippet of pseudo-code. This is all you really need to do to parse and output highlighted code:

This entry was posted in programming and tagged php, php like a pro. Bookmark the permalink.