Having created a really simple Pastebin, how about we embark on something more ambitious. An actual web app with all the usual trappings: user accounts, session management, email notifications and etc. On the other hand, I shouldn’t try to build anything too ambitious because the purpose of this series is an educational one – which means I need to be able to break it down into manageable chunks and post digestible code snippets here for your enjoyment.

Oh, and I should probably introduce some new tools and concepts. If we designed this new thing using the same exact set of tools it wouldn’t be educational, no? It would be just… Work, I guess. Cause that’s what you usually do – you find a set of tools and packages you are comfortable with and you use them often. It saves time, effort and research when you have tight deadlines. But we want to learn and grow here, so let’s use something new.

For this project I want to use a PHP micro-framework called Silex. Why this one? Because I think it is fairly brilliant and elegant. Here is the idea behind it: instead of providing a traditional full stack (and the kitchen sink) framework Silex is modular. At it’s very slimmest, it gives you a very neat front controller and page routing mechanism. Observe:

Is that sexy or what? It is worth using just for that. But the framework has a lot more to offer. You want templating? Sixex seamlessly integrates with Twig. Remember that Twig factory class I created for the pastebin? There is a built-in equivalent in Silex. It also has a session handling module, form generation, form validation, email handling module, database abstraction layer and etc. All of these are more or less independent projects – many of which were built for the much fatter and complex Symphony framework. Silex binds them all together and ensures they work correctly.

So for this project I figured I would use the following Silex service providers:

I actually really wanted to use Doctrine ORM, but Silex only has the integration with Doctrine

Here is the reason I really like Silex: it uses Composer to manage all these dependencies. So all I need to do to get a Silex bundle with just the packages listed above and their own dependencies is to create a properly formatted composer.json file.

Here is another great thing about this framework – it is on the bleeding edge of the PHP world. It won’t actually run on anything less than PHP 5.4 because it makes extensive use of PHP Traits and improved closure syntax. It is elegant, modern, modular, sleek and very cool. I feel it is designed the way PHP apps ought to be designed.

If you happen to be running an Ubuntu 10.4 Vagrant box, like I told you to then this is what you will have to do to upgrade it to PHP 5.4:

For some strange reason the latest version of PHP has not been back-ported to the official Lucid Lynx repositories, so we have to use a PPA.

I want to potentially showcase a build tool that would automate the testing and prepare my project for deployment. I guess I could use Ant, but since we are trying to be all about PHP perhaps Phing would be a better choice.

There is probably also a good chance we might need some JavaScript for this project. If we do, an there is enough complexity there I’m considering using jQuery framework and perhaps RequireJS for dependency management.

How does RequireJS work? Well, it makes managing and loading JavaScript much easier. All you do is insert a single line in your template like this:

Then you create main.js in the directory scripts/ and do something like this:

Granted, this is supposed to be mostly a PHP series, but these days it is actually hard to do any web development without some JavaScript in the mix. So we might as well use a little bit of it. And since we will be using it, we also ought to have some way of testing it.

I’m thinking about using either QUnit or Buster.js framework. I haven’t used either one of them so it will be a learning experience for me too.

So, having decided on the tools and environment, what kind of simple, yet non-trivial kind of app could we make?

There are a lot of bug tracking apps and services out there which range from really simple embedded apps (like GitHub and Google Code bug trackers), no frills standalone fully hosted services (Like Lighthouse) to full featured, modular and extensible self hosted apps (like Trac). The choice is much slimmer when it comes to IT issue tracking. Most ticketing systems out there take the kitchen sink approach to IT and like to flaunt their long feature lists. Personally, I like simplicity so many years ago I wrote my own and called it The Issue Tracking System. My boss liked the idea, but didn’t like the acronym so he told me to drop the “The” and re-brand it with company name.

But that was long ago, and I wouldn’t show you the code that runs TITS out of fear of dying out of embarrassment. But ever since I realized how bad that app was, I wanted to re-write it from scratch, simplify it even further removing the business specific features and making it generic and release it upon the world. I want it to be as simple and easy to use as the issue tracker in Google Code.

Pastebins are kinda intuitive – if you used one, you kinda know how it works on the basic level and everything else on top are just bells and whistles. Issue tracking systems can be very complex, or very simple depending on needs. I want to keep it simple.

So let’s think about our main data entities. I can think of three:

IT tickets tend to be a little bit different than software bugs. A bug usually affects everyone, so bug trackers are typically open to the public and searchable by anyone. A typical IT issue is something along the lines of “Judy from accounting minimized her Outlook (again) and help desk had to remote in and maximize it for her, and then help her send an email because she forgot how (again).” To save Judy some embarrassment, I’m thinking our tracking system should have access controls – users only being able to see issues they are affected by.

Let’s talk about each of these elements.

A user is identified by an email address and a password. I envision two types: regular users who can open new issues and post updates, specialists who can edit, prioritize and close issues. Specialist may also have an optional “title” that describes their function (ie. software support, hardware support, manager, etc).

Lets keep it as simple as possible. Here is the information I want to keep about every issue:

Additional info can be attached to each issue using tag system like the one in Github issue tracker though it does not need to be that fancy. The tags can be used to implement category system (hardware, software, email, malware, etc..). It gives the system flexibility.

Updates ought to be just simple text comments with a date, and name of the user who posted it. In addition, when a specialist modifies an issue (by adding a tag, or closing it) an update should be posted with that user’s credentials and automatically generated text saying for example “so and so changed status to resolved”.

Or maybe user stories if you want to be more agile or something. I honestly don’t care what you call these things, but I basically want to lay down basic interactions people will have with this app. I envision about 8 separate scenarios (excluding stuff like logging in and logging out) that will help us envision the interface and life cycle of an issue.

Note this is probably boring and mostly for my benefit so I’m going to make it small so you can just skip over it if you don’t feel like reading it:

We can use these use-cases as templates to create acceptance tests with Codeception.

We have a lot of auto updates for all kinds of scenarios. It would be good to be able to visually distinguish these from actual updates posted by humans. Perhaps a field in the Update table can let us do that.

Often it is a good idea to create UI Mockups for your page before you even start working. Simple wireframe will help you nail down the rough outline for the layout – especially if you will be working with a team of designers. I used the neat online tool called Frame Box to create these.

An end user creating an issue ought to see something like this: 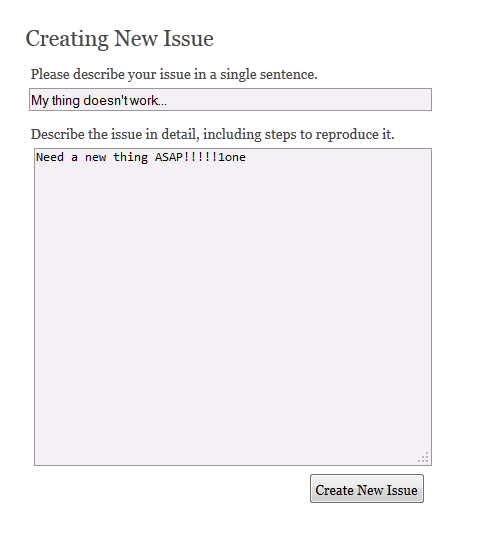 A specialist will have all the options available on the sidebar like this: 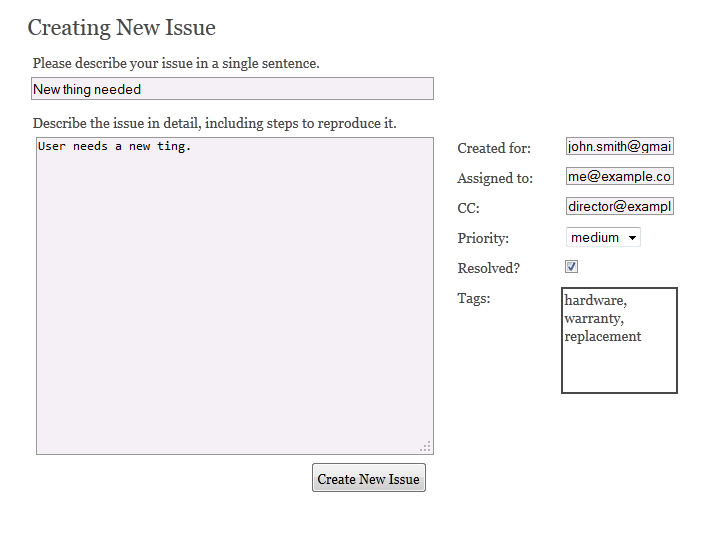 Here is roughly how a static (ie. non editable) detailed view of the issue would like. Specialists would see a slightly different version where they would have some controls to change the status, priority or close the issue. 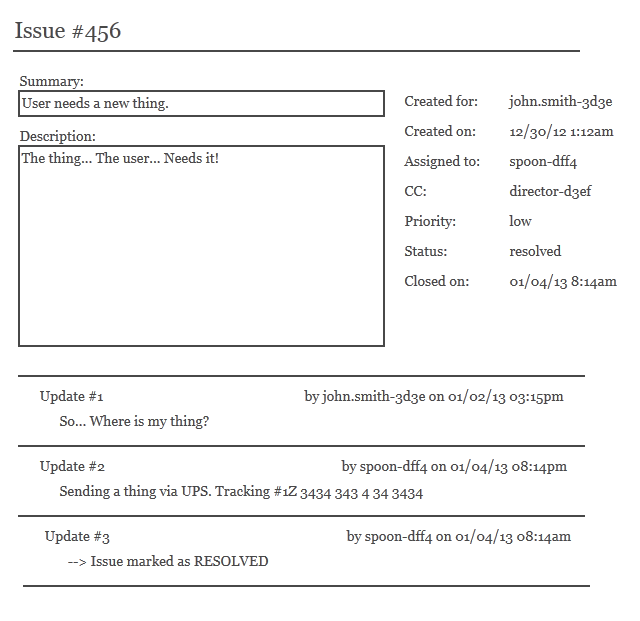 I’m actually thinking about placing these controls right above the “update” text box – this way the process of closing an issue or changing priority would be identical to that of posting an update.

Sorry for the wall of text here, but I figured we need to jot down some specifications and make a few design decisions up-front so that we can be clear as to what we want to create and how we will be going about it. Next time, we’ll actually write some code.

This entry was posted in programming and tagged php, php like a pro. Bookmark the permalink.