Iron Man 3 is the first of the post-Avenger era Marvel movie. Joss Whedon’s epic super hero romp is a tough act to follow, both in terms of quality and box office success (which are not the same thing mind you). Before he helmed the big Marvel Universe cross-over the singular hero movies were all we got and we liked them. However, once the audiences got a taste of having Iron Man, Captain America, Thor and The Hulk in the same movie, one must wonder if they will still enjoy watching them adventure on their own. So the first post-Avengers film has to prove that a single hero story-line can still carry a movie.. And that it can do it without Joss Whedon’s writing and direction.

That’s not the only reason why Iron Man was a tough gig though. It also had a difficult task of reconciling the Iron Man continuity with the events that happened during the Avengers. Whedon didn’t really need to worry as much about reconciling all the plot threads from all the different movies because he was building something new and something bold and he could just pluck the heroes from their element and put them on a flying aircraft carrier. However, Iron Man 3 returns Tony Stark to his own established setting, with a cast of established characters (Pepper Pots, Happy Hogan, Col. Rhodes, etc..). It needs to tie the old with the new somehow, and this is especially difficult in terms of Iron Man mythos. 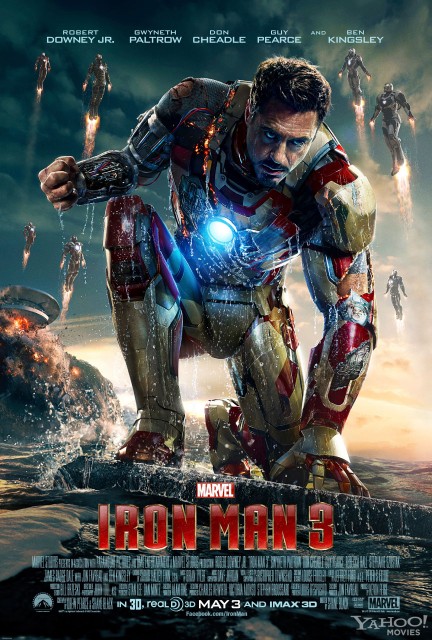 Thor is an alien space-god who fights frost giants and sorcerers with Clarktech magic so it is easy to hand-wave anything on his continuity. Captain is a displaced fish out of water character so anything that happens to him is essentially a blank slate – you can go anywhere with this hero right now and no one will probably make fuss about it. But Iron Man had two movies to establish his own setting. There is a thematic continuity and certain kind of feel to the Iron Man movies and you sort of must at least try to maintain that in order to make a successful sequel because that’s what people want to see. The problem is that in the last two movies Tony Stark fought relatively low powered (at least compared to Loki) rivals in power armors, and magic alien space gods were not even on his map. Going back to that place would be counter-productive.

I must say that Drew Pierce and Shane Black did an admirable job tying the two continuities into one by addressing the dissonance between them directly. Instead of ignoring the world changing events that happened in New York, they become a central point of Tony Stark’s character arc (yes, Tony has an arc in this film – this is new and definitely a welcome addition to the Iron Man franchise). After fighting alongside gods and monsters, the hero feels somewhat inadequate. Thor, Cap and Hulk all have super powers and can fight alien space monster with their bare hands if need be. Iron Man on the other hand is powerless without his armor, and Stark is all too keenly aware of that. Events of Avengers have shook him to the core, and he is still suffering night terrors and panic attacks triggered by memories of the giant wormhole in the sky. As if to compensate, he fills his house with ever more powerful variants of his armor and finding new ways to get the armor deployed and combat ready as fast as possible. Of course it is all for nothing, and he is soon stripped from his high-tech weapons and forced to overcome his insecurities fighting super-powered villains with nothing but the power of his intellect.

This is a solid character arc, and a solid foundation for a plot: something the previous two Iron Man movies didn’t really have. The second installment especially was rather aimless, directionless mess and the third movie is definitely an improvement over that.

A lot of people seem to be upset about the Mandarin bit, but lets face it: was anyone really expecting him to show up looking like Lo Pan from Big Trouble in Little China in this day and age? As much as comic book readers might be fond of the character, the truth is that the original character concept was somewhat racist. The updated movie version (a middle-eastern terrorist with oriental flair trappings) seems not only much more timely but also quite subversive. When Ben Kingsley showed up on the screen I couldn’t believe how calculated his character design was: this Mandarin was the sum of all post 9/11 fears made flesh. Part Bin-Laden, part Kim Jung Il, part super-villain mastermind he was the picture-perfect boogeyman that proponents of the war on terror have nightmares about.

Speaking of Mandarin, let’s talk about the big twist. If you haven’t seen the movie and don’t want to get spoiled I suggest you skip over the stuff in the gray box below.

At first I didn’t really know how to feel about the non-Mandarin. The more I think about it, the more I like it. Perhaps it is because I was never that attached to Iron Man comics and I don’t really care about Mandarin as a villain. So tweaking his back-story and his powers in an amusing way didn’t really rub me the wrong way. At the same time as I was watching the movie, I felt that Kingsley’s version of Mandarin was just a little bit too on the nose. It was too calculated and cartoonish in all the wrong ways so it was a relief to find out he was a decoy – and a brilliant one at that. Not to mention the fact that Kingsley is wickedly funny as the washed up actor.

You also have to keep in mind that the last two Iron Man movies completely bastardized and ruined other prominent Iron Man villains so expecting this installment to do any different seemed silly. It looks like Joss Whedon is the only super-hero writer in Hollywood who can currently write fun, compelling and enduring villains and I did not expect that to change overnight.

The acting was pretty decent in this one: Kingsley was great, Downey was doing his thing as he always does, Gweneth Paltrow actually got to punch things… Though only after prolonged session of damsel in distress bondage. The kid was quite terrible, as all children in movies are but at least he was able to set up one of the funniest Downey lines in the movie.

Guy Pierce however was kinda annoying. I can’t really put my finger on it, but something about his performance bothered me. I didn’t necessarily hate him – when an actor can actually make you hate his villain then he is actually doing his job well (see Jack Gleeson, aka Joffrey Lanister – the most hated kid in America and Westeros right now). Pierce’s character just felt a bit boring. Granted it might just be that he was completely eclipsed and overshadowed by Kingsley and Downey in terms of the on-screen presence.

All in all, I think the movie was pretty solid. It might be one of the best installments in the Iron Man franchise so far – or at the very least, better than the second movie. It had a good character arc, some fun plot twists and pretty decent dialogue. Granted, it was not without flaws (movie children usually ruin shit pretty fiercely) and plot holes… For example: can someone explain to me why didn’t Tony open up his indestructible bunker that contained an army of remote operated Iron Man suits earlier? Like right away after crashing in the snow? Or when he got his suit powered up again? Because I can’t fucking figure it out.