Along with a few of my buddies I have recently decided to get back into Warhammer Fantasy Battles. Some of you might already know what it is, but I feel that I probably need to explain the hobby to the readers who have never dabbled in the hobby.

Warhammer Fantasy is a tabletop war game. What this means at the highest level of abstraction is that you get together with one or more of your friends, you commandeer a table (or any other flat surface) and transform it into a playing area upon which two (or more) armies will have an encounter. It is a bit like playing a board game, only there is no board.

In chess you have pieces, each of which has a special movement rules – ie how many squares it can hop and in what pattern. In tabletop war games you typically have units (which typically consists of dozen or more miniatures) which have rules describing how many inches they can move across the table per turn and etc. When units meet they fight and you resolve the combat by rolling dice. There are all kinds of rules concerning which units strike first, which have advantage, how armor and equipment affects their chances and etc. It can all be very simple or very complex, depending on the game.

In case you are interested, these little guys come in pieces on plastic spures, kinda like model airplanes or train sets. Each one is composed out of about 4-5 individual pieces that you can mix and match to give them a lot of variety and different poses. These guys are brandishing double handed weapons, but the same kit also lets you build dudes with hand weapons and shields…

Which is the other side of the game – something that makes it a hobby. The army you use to play the game is in essence one big arts and crafts project. You need to lovingly assemble cut out all the units, file down the imperfections, glue them together and paint them so that they look nice on the table. Some people spend a lot of time doing just that. If you go online there are many sites and youtube channels that teach painting basics, share advanced techniques and etc. Since most models come in pieces or can be cut to pieces easily, people like to mix and match different sets to create interesting looking combinations. Sometimes this involves drilling and pinning pieces together, application of modeling putty and etc.

In essence tabletop war games are like a MMO for the real world: just about anyone can find an aspect of them that they find interesting. Folks who are into competitive strategy games will be drawn to the tactical aspect of choosing the right unit combination and making the right plays during the battle. Those with an artistic bug or a penchant for craft projects can really get into the building/painting and conversion. Collectors will find a lot of joy in just trading models, finding classic miniatures that have been out of print for years and etc.

That said, the hobby ain’t cheep. Especially Warhammer Fantasy which unlike it’s Science Fiction sister-game (Warhammer 40,000) typically requires a large number of models on the table. The unit I posted above is actually unfinished. The actual unit I typically field in real games is twice as big (30 models). And it is one of a dozen units of similar size of the table.

Prices vary depending on model size and detail. The Dwarf Warrior models in the picture come in kits of 16 models at approximately $35 per box. Some units don’t have cheep plastic kits and instead are sold in boxes of five metal models at around $24. For a Dwarf player a typical unit size is 15-30 models and you need at least 3-4 units plus a few war machines to have a viable force. That’s a lot of money for something that is just a silly weekend hobby.

Granted, we are all adults with disposable income but if I owned no models I’d probably think twice about getting into this hobby. Fortunately, I already did most of the required spending in my younger and more vulnerable years. In my attic there was a box that had a treasure trove of ancient Dwarf miniatures. Some of them unfortunately been smashed to pieces, or inadvertently destroyed by my attempts at “conversion” but quite a few have survived. Some of these are absolute classics. For example, I own around 20 of the classic Dwarf Long Beards designed by Aly Morrison and Colin Dixon back in 1998: 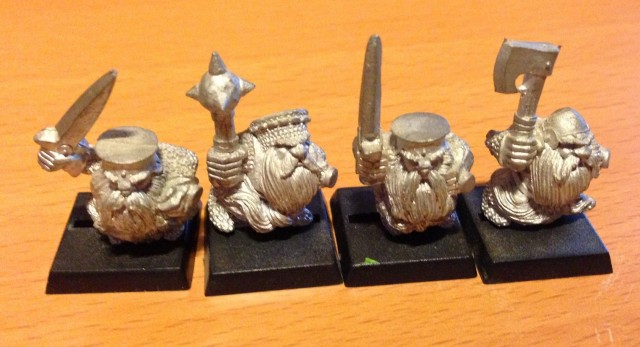 Morrison and Dixon are responsible for the lion share of the Games-Workshop/Citadel Miniatures lineup in the late 90’s. If you look through the old catalogs, their names are stamped on just about every page. The thing about their work is that the quality was very uneven. Their Dwarfs for example are fantastic. In Warhammer universe Dwarfs don’t like to shave – so the older the Dwarf, the longer the beard. The Long Beard units are grizzled, grumpy veterans and I think the models do a great job of conveying this. The miss-matched weapons are a little annoying (these days you’d be hard pressed to see a Dwarf miniature brandishing anything but an axe) but they kinda work in the context… Compare this to say… Their 1998 Dark Elf Witch Elves: 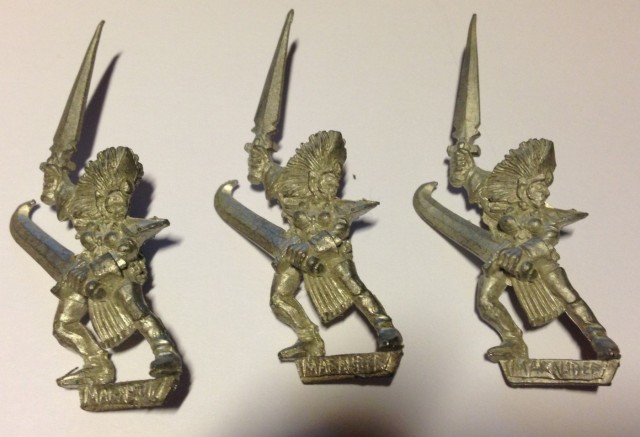 They are not proportionate, their faces are smushed and weird, and in general they lack the charm and style of their Dwarf miniatures. And yes, those Dark Elf miniatures are also from my personal collection.

But I digress. I guess my original point was that I actually like the sizable force of Dwarfs that I found in my attic. They are all classic miniatures from the 90’s which makes them a rather unique. Well, at least parts of my army. The Dwarf Hammerers I bought in the early 00’s are absolutely fantastic and such an iconic center-piece of a Dwarf Army that their design has not been updated since then. The chemical composition of the alloys they are cast in has changed a few times, but the models are still cast from that same mold: 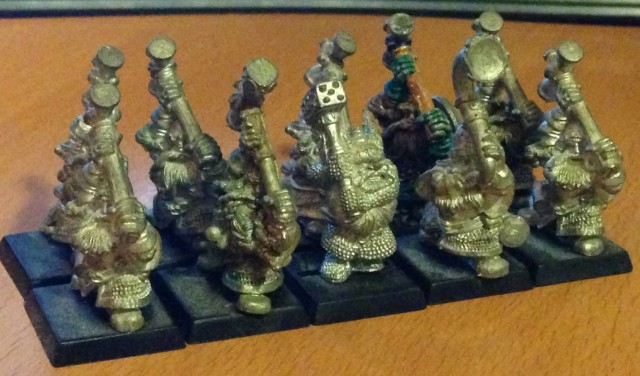 Hammerers, by the way are Dwarf super-elite infantry. They are strongest and best trained warriors hand-picked to be the personal guards to the Dwarvern royalty and as such they typically accompany your army general. They are not only gorgeous model, but a really good unit and a joy to field in the battle – and more or less a fan favorite.

Other units however, such as the aforementioned long beards are long gone and out of print. These days Long Beards are typically built out of the same unit kit as the basic Warriors and simply spruced up with fancier shields, and painted with gray beards. So having a number of Morrison-Dixon models that actually have long, floor sweeping beards fighting with swords, maces and flails really makes them stand out from your rank and file.

My other favorite unit are my Iron Breakers – also Morrison-Dixon design. They are unofficially known as the “Classic Plate Mail and Plumes Iron Breakers” because of their stylized armor: 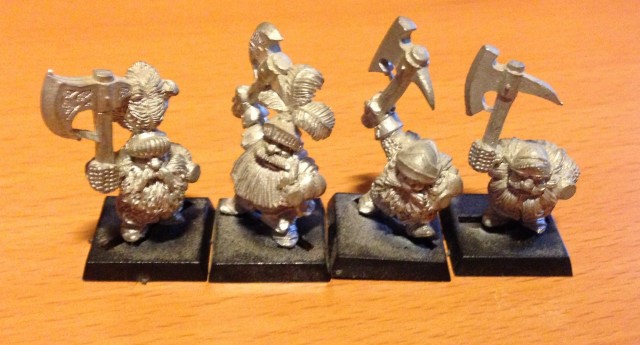 This was actually a really clever ploy to increase model sales. Back in the day Empire players could field Imperial Dwarfs units as part of the army and these particular models had armor that closely matched what knights of the empire would wear. Hence they were coveted both by Dwarf and Empire players.

The default characteristic of Iron Breakers is that they are very heavily armored – they are akin to knights on foot really. Modern Iron Breakers have a very cool tin-can style look to them. And while I actually really like the new models, these classic knightly Dwarfs are really, really fun to look at. They have a very distinct feel to them that sets them apart from the entire army. Not to mention that I have over twenty of these bad boys and it would cost me a fortune to replace them with the new models. I don’t really want to mix and match new models with the old because they look markedly different.

So right now I am scouring Ebay for good deals on the classic Morrison-Dixon Iron Breakers and Long Beards. I only need about 10-15 of the later and 5 of the former to have the unit sizes that I really want. I already got a few decent models on the cheep, and a set of nice shields that will give my breakers a more armored look.

My next adventure will be stripping the paint from the old models. Yes, in my younger years I was an avid painter. I was passionate about it, but unfortunately not very good. Which left a lot of my models in a rather bad shape. Fortunately, seeing how most of them are made out of metal alloys they should be able to withstand a dip in the acetone or some other cleaning agent without melting down. So at some point you may see me writing a post about paint stripping techniques… Maybe.

So that’s pretty much what I’ve been doing all last week – uncovering my old treasure trove, rediscovering my love for modeling and war games, and scouring ebay and bits stores for parts. Oh, and playing a few games too.

How about you? Have you ever played Warhammer Fantasy? How about 40k? What armies? Have you played any other war games? At one point or another I have played just about every game from Games Workshop: Necromunda, Mordheim, Battlefleet Gothic, etc. The only things I haven’t played were Blod Bowl, Epic and the Lord of the Rings game.