I believe I mentioned the fact I recently got back into Warhammer Fantasy, which is a tabletop miniature war game for adult man children that involves moving around big units of what amounts to fantasy styled army-men across the table. You can judge all you want, but the game is fun as hell. Just keep in mind that’s what I do on the weekends these days next time you feel like saying “I’m such a nerd” because you spent Saturday evening programming. I spent it battling my Dwarf War Throng against the dainty, back-stabbing High Elf assholes on my dining room table.

Anyway, miniatures are not only used in tabletop war games such as Warhammer. They also get a lot of use in classic RPG settings. The 4th edition of D&D for example brought back the whole grid and miniatures style of combat resolution. Granted, some RPG purist would prefer that 4th Ed did not exist at all but to be honest, I think it can be fun in a hack-n-slash type of way. It’s also a great way to introduce younger players into the fold. They can get their munchkin phase out of their system on the miniature based, dungeon grid battles and then slowly graduate to storytelling systems. Because that’s what happens, isn’t it? Don’t even try to lie – you power-gamed and tweaked your character builds like a fiend when you were 12, and so did I.

What was I talking about? Oh, yes – paint stripping. Whether you are into tabletop battle games or RPG, chances are you have been doing it for a while now. This means you likely have a back-log of miniatures with paint jobs. Some folks who are consistently active in the hobby don’t have that problem as they re-paint their stuff all the time. I fell out of the hobby for a number of years, and my miniatures were put in the attic and mostly forgotten until recently when along with some friends I decided to bring the `hammer back into our lives. I’m actually really glad I didn’t toss the entire lot out when I sort of gave up on the hobby a decade ago. Now I have a sizable force of classic 80’s miniatures that have been out of print (some models I have are so rare they typically don’t dip below $50 starting price on eBay auctions). The main problem I have right now is that a lion share of them are painted.

I was never a stellar miniature painter, but by Crom, I have tried my best. Let me give you a little sample of just how bad I was. The picture below shows you the same model painted by two different people. The top image is what I actually would consider pretty decent paint job by some dude with an interweb handle of ajefferism. The bottom one is young me exhibiting zero hand eye coordination whatsoever. 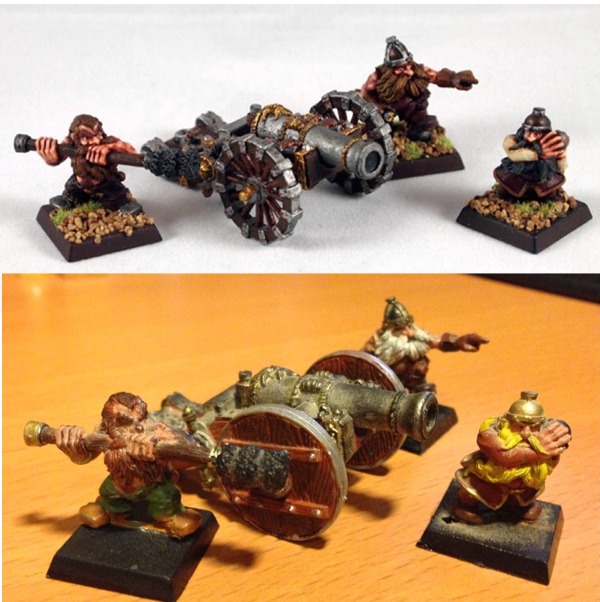 Granted, this is one of my “early” masterpieces. I have later learned a lot of tricks of the trade such as using inks, dry brushing, mixing paints to do highlights and etc. Unfortunately most of my Dwarf Army was speed painted with little to no concern for aesthetics and as a result it looks like ass. It is actually quite amusing to look back at these models and laugh at how bad I was but the terrible paint job is kinda distracting when you are trying to play the game and everyone has to pick up your models and go “wow dude, really?”. And by someone I mean mostly me. I mean, listen – when I put detail oriented on my resume I don’t actually mean work, I am talking about this kind of detail. That’s the kind of shit that drives me bonkers.

So I have been experimenting with paint stripping techniques lately. The idea is to take the badly painted miniatures and get them back down to bare metal state so that they could one day be painted again.

A word about paints: I have always been using Citadel Paints by Games Workshop. As far as I’m aware they are not the best choice when it comes to miniature painting, and some pro painters swear by competing brands, but I never really tried anything else. It was always more about not wanting to venture outside of my comfort zone rather than anything else. Also, Citadels are labeled as water based and water soluble which meant that they were easy on the brushes and clean-up required just a little bit of soapy water and no paint thinner. Also, I guess I have always had a little bit of foresight in this, predicting I might one day want to strip the minis down. And supposedly oil based paints are harder to get rid off.

Seeing how the paints were labeled as water soluble, I decided to use the least drastic measures first. I filled up a can with water, added a liberal amount of soap and left bunch of miniatures to soak in it over night. This made my miniatures wet. That was about the extent of the effect. It also made them somewhat cleaner than before, which is nice, but not entirely what I was after. So soapy water did not do the job.

Round two involved isopropyl alcohol. I use it whenever I superglue myself to myself when working with miniatures, and I figured that if it can dissolve glue, it can probably also dissolve the paint. The miniatures I was stripping were made out of some sort of metal alloy so I was pretty confident they wouldn’t get damaged. I soaked them in a can overnight, and when I extracted them in the morning I was overjoyed to find it kinda worked. That said, the results were less than impressive – the paint flaked off in few exposed places but it was still pretty hard to remove.

Finally, I decided to use the heavy duty stuff: acetone. I figured that if it is strong enough to kill toons, it should have no problem stripping paint off my Dwarves:

Ok, granted the stuff Judge Doom uses to kill his brethren is not pure acetone but rather benzine, turpentine and acetone mix, but I was not really going to play alchemist trying to mix up that nuclear concoction. So I went with simple store bought acetone based nail polish remover. This turned out to be a winning solution. Granted, it did not dissolve the paint away by itself, but it did break the adhesive bonds it made to the metal and made it brittle enough to be scrubbed away easily.

Essentially, here is what you will need to get the job done:

Here is your paint stripping kit, in picture form: 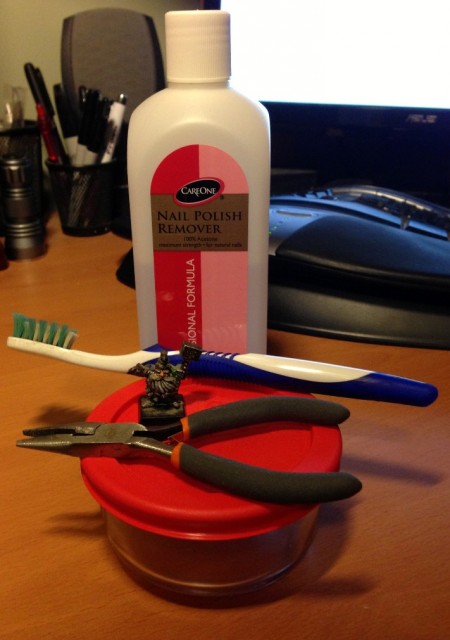 The procedure is rather simple: you fill up the container with enough acetone to be able to submerge your miniatures without anything sticking out above the surface of the liquid. I think it is fairly obvious that you want to remove the bases from your minis and lay them down flat on the bottom rather than have them standing up. I wouldn’t recommend using acetone on plastic miniatures or ones that have plastic components, but for metal ones it works fine.

Once you place your miniatures in your container and pour the acetone in, close it tight and put it away for a few hours. You want to keep it sealed because acetone stinks to high heaven. In fact, I recommend doing all of this in a well ventilated area. Open up your windows or take the entire kit outside if you can. I know this stuff is used for nails, but I’m fairly sure there were some safety warnings on the bottle which I completely ignored and I’m to lazy to look up right now. Don’t get high huffing that stuff – there are much classier recreational drugs you can put in your body if that’s what you’re after.

Here is a tip: if you have some nail polish remover in your house, and it belongs to your wife, girlfriend or cross dressing roommate do not use it. When used on nails this stuff lasts forever but we are going to use a lot of it. Depending on how big your container is, you might use up to a half of the bottle to fill it up. So be nice and buy your own.

How do you know the miniatures are ready? Well, typically you want to soak them for a few hours. The nail polish remover was clear and after few hours of soaking it changed color to dirty brown and flakes of paint started depositing on the bottom. That’s usually a good indication that you can start scrubbing. Use pliers to extract your miniatures and hold them while you scrub. I know people use this stuff on nails, but I’m pretty sure you are not supposed to soak your fingers in it. Unless you have gloves, I wouldn’t recommend getting your hands wet with this stuff.

I recommend getting a hard or medium toothbrush. Soft ones are a little too delicate and you want to have some abrasive force in there. It took me about 5 minutes of vigorous brushing per miniature to get most of the paint off. If it seems like you are starting to get diminishing returns, I recommend re-dipping the mini in the brine. You typically don’t need to soak it again – just dip and brush. The paint comes off better when wet.

The results were pretty encouraging. I was able to get most miniatures looking like they were brand new. I did have some issues with one shade of blue for some reason, which wouldn’t come off no matter how hard and long I scrubbed it. 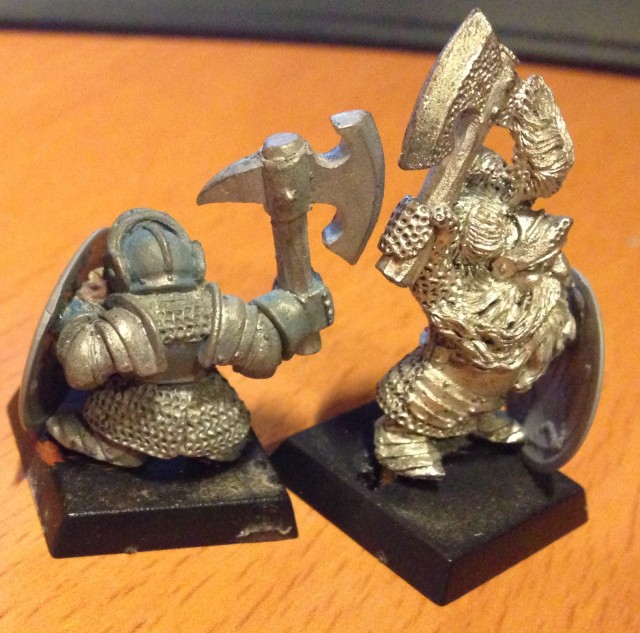 The miniature on the right is one that I was able to clean up completely. You can barely tell it was stripped save for a random flake of paint in the plume of beard here and there. Most of the paint rubbed off in the first minute or so, the rest of the time being spent trying to get the paint out of the crevices in the beard, plume and the chain-mail.

The miniature on the left shows the blue paint I couldn’t get off. This one got scrubbed 3 times, each time landing in the acetone to soak for 1-2 hours. The brown paint on the beard and the metallic finishes came off on the first round, but the blue armor pieces persisted. Each time I would scrub it for 10-15 minutes and the blue would get slightly lighter. I suspect part of the issue might be the alloy this miniature was made out of. It is actually one of the oldest miniatures in my collection, and you will note that it is actually much darker than the one on the right.

At some point I decided to give up on it. Eventually these will get primed and re-painted and the blue tint is so thin it should not be an issue once that happens.

When I use up the remaining acetone, I might try picking up a genuine paint thinner at a hardware store to see if it gives me better results. Have you ever stripped paint of old miniatures? What is your method? What do you use for plastics? Let me know in the comments.