There are two kinds of stories awesome and not awesome. Professional critics may use much more granular scale, but for my purposes this is pretty much sufficient. The awesomeness of the story, as indicated by the back-of-the-cover blurb or it’s Amazon equivalent is more or less how I judge books when deciding whether or not I want to buy them. In order to interest me, a story has to have something that will capture my interest and make me want to immerse myself in it. Not all stories can actually do that. An example of something from the un-awesome category would be: “they are two cops, who are also buddies and they solve a complicated crime”. This to me says boring, mundane, unoriginal and pretty damn pedestrian. Of course with the right writing style, well rounded characters and an interesting mystery at the core, even such a safe and boring premise could become something quite amazing. But that does not happen very often. Most of the time you get exactly what it says on the tin: something that was written by people without imagination for people with even less imagination. That last group is also sometimes called “the mainstream public” and I honestly don’t even know why we keep them around.

On the other hand, sometimes you read a premise of a story and it is so mind-bogglingly amazing your pants literally fall of on the spot. Please keep in mind that there is nothing sexual in this sort of de-pantsment. It’s just that certain types of awesomeness are simply best faced in your underwear. Bit Rot by Charles Stross is exactly that kind of a story. Let me tell you just how awesome it is.

Bit Rot is a story:

If your pants are still on, you are probably made out of stone, or an alien replicant of some sort who does not appreciate the “high-culture” of the internet. Charlie Stross however definitely does. Sometimes it is easy to forget that the man is one of us, seeing how he has a real life publisher and actual genuine book deals. But the stuff he writes sometime is so much in sync with the collective wants and dreams of the netizens it is not even funny. 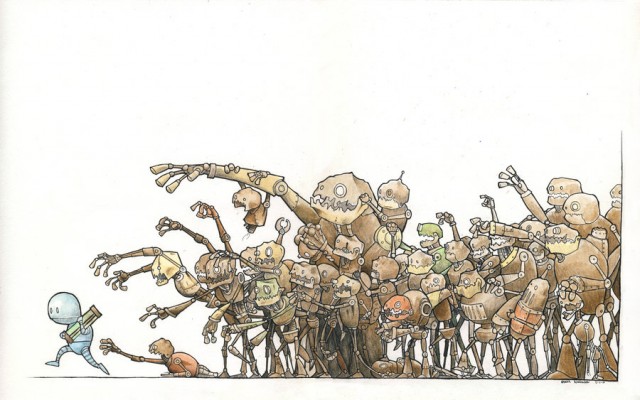 Image somewhat unrelated but very on topic. By ~OSCAR-N.

A lesser writer would take the above premise and play it for jokes, but Stross takes it absolutely seriously. Not only does he develop a plausible explanation how a “zombie” style plague could break out amongst synthetic arndroid colonists, but he also confidently ties it into one of his book continuities. The story is actually supposed to be taking place in the Saturn’s Children universe. Unfortunately I have never read that book, mainly because of it’s cover. No, seriously I have no clue what his publisher was thinking but it made me avoid it. I generally make a point of not buying books with gratuitous amount of cleavage on the cover. But after reading Bit Rot I might need to re-consider because the setting actually sounds intriguing. Either way, the short story stands alone quite well and you actually do not need to have any knowledge of the novel to fully enjoy it.

It is distant future, and humanity is now long gone. The only thing we have left behind is the sprawling support system that is run by sentient androids of all shapes and sizes. After the last human died, instead of closing shop the care-takers decided to just continue doing their thing. There was no robot uprising or mass genocide mind you. Humans simply got fat, lazy and complacent and eventually didn’t even really feel like getting out of the house to reproduce so they have faded away. The androids were designed to act and think much like humans so that they could better empathize with their masters and so they inherited a lot of our good and bad traits. Some are nice, some are jerks and etc. They still remember humans quite fondly and refer to them as their “ancestors”.

In general their bodies are self-repairing and they have almost indefinite lifespans and as such they are much more suited to very long, interstellar jaunts at relativistic speeds. The story is about two “sisters” who sign up for one of such trips, mostly to get away from their rich, spoiled arrogant “mother”. I’m putting these words in quotations because they are all robots, so they don’t reproduce biologically. The protagonists consider themselves “sisters” because their personalities have been based on the same template. A rich Earth socialite forked them off in order to live vicariously through their adventures. But they got tired living in her shadow and booked a one way trip into the unknown to forge their own destiny far away from home. En route there shit goes terribly wrong (or terribly right, depending on whether you are a character or a reader of the story).

It has been quite a while since I have seen an original take on zombies. While zombies in space have been done before, I don’t think I have ever seen a zombie story that involved androids and no humans. Neither have I ever seen hard science used to explain the plague. Bit Rot has probably the best, and most plausible kind of zombies out there. My only complaint about the story is that it is too short. Stross ends it just when things start to get really interesting, leaving the rest to the imagination of the readers. I would love to see it fleshed out to a full length novel, a movie or a video game. Anything really, because the premise is amazingly awesome.

If you have a few free moments, definitely check this one out. Good news is that the full text of the story is available online. The formatting is not the best though, so I recommend running it through Instantpaper, Readability or Pocket to get the enhanced readable version instead.