If you’re up for a good read, put Grass by Sheri Tepper on your to read list immediately. It is a solid, wonderfully written Science Fiction novel, with amazing characters and interesting premise. It is also the book that inspired my unicorns are assholes article. If you enjoyed that idea, you will love Grass because, well, it is a bit like that, but much, much better. 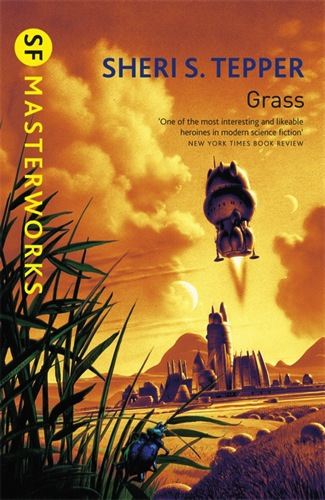 Grass is a planet, one of a dozen or so human colonies scattered throughout the galaxy. It is a rather backwards, provincial and mostly rural world with little to no industry. It’s only major city is clustered around the space port, which sees a good deal of off-world traffic because the planet is a convenient half-way point on some major trade routes. Outside the port and the commerce going on in the city, little else happens on Grass. The planet is ruled by a handful of aristocratic families who seem to be obsessed with fox hunts. Only the animals they hunt are only foxes in name. They are some indigenous alien life form, as are the hounds and the mounts ridden to the hunt. Little is known about the customs of these people, because they are reclusive and xenophobic and distrustful of foreigners.

For many generations the aristocrats of grass covered planet has been left to its own devices. Now however an incurable and deadly plague is sweeping all across the human colonies decimating their population. The authorities try to keep it secret to prevent panic, while frantically searching for a cure. The plague seems to be everywhere, except Grass. In fact there is some evidence that infected travelers who had a lay-over on Grass were mysteriously cured of the disease.

An ambassador is sent to the planet under some official pretext, with a secret mission to investigate the matter. He and his family are to infiltrate the aristocratic circles, find out what is known about the plague, and try to convince the leaders of the planet to allow a scientific investigation that could help develop a cure if one exists. Because the aristocrats of the Grass are known to be avid hunters, the Terran authorities pick a family of former Olympic equestrian athletes in the hopes they can find common ground with the locals in their shared love of horseback riding.

This proves to be a complete misunderstanding. The Grassian “mounts”, “hounds” and “foxes” turn out to be nothing like their counterparts from Earth. The hunt is more than mere entertainment, but rather a ritual experience that is fundamental to the Grassian culture, but at the same time deeply unsettling to Terrans. The relationship between the huntsmen and their hunting “animals” is strange and troubling to say the least. What is even more worrisome is the mystery that surrounds the creatures that are being hunted?

The Terran ambasados realize that Grass holds more than one secret… But perhaps these secrets are connected. For example, there are ruins of an advanced ancient alien civilization lost in the grasses. Those aliens died off long before first humans made planet fall. Similar ruins have been found on few other planets, but the ones on Grass are unique because they contained alien remains… All mangled, broken, dismembered and scattered throughout the city. Whatever killed them may now pose a threat to human colonists.

I must admit that I really love this type of stories with in which you the setting itself is a part of a big mystery. Tepper masterfully teases the reader with little details of the Grassian way of life without ever revealing too much until it is dramatically appropriate. It is one of those settings that is best approached with little to no prior knowledge. Unfortunately I might have already gave you a pretty good idea of what exactly is going on on Grass with my Monday post. So you should… You know… Retroactively, un-read it before picking up this book.

Actually no, that’s not accurate. What I might have let on in my last post is merely the first reveal in the book, and there are several layers to the mystery. So even if you have figured out the “mounts” are more than meets the eye, you are still only a little bit ahead of the game.

Besides, the book is worth reading just for the character alone. Majorie, the protagonist is wonderfully fleshed out, nuanced and flawed characters I have encountered lately. She is a passionate, strong, drive, ambitious and independent woman who desperately tries to keep her family together, even though her husband is unfaithful and abusive and her children are selfish and ungrateful. She plays the role of submissive, understanding wife and mother, but on the inside she is growing angry and resentful. Then regrets and feels guilty about that. She is this sort of wonderful boiling cauldron of conflicting emotions: love, anger, resentment, guilt, duty, religious devotion, etc.. Tepper just puts the lid on, cranks up the heat. You expect Majorie to explode under the pressure at any moment. But she never does. And when the shit hits the fan, she blossoms into an amazing leader who can make hard decisions under pressure, and lead by example by risking her own life for the greater good without a moment of hesitation.

In a way Grass reminds me of The Sparrow. It has the same slow cooking reveal, and similar focus on introspective character development. In fact both books feature characters who are devout Catholics undergoing a crisis of faith, though they deal with it in different ways and for different reasons. So if you liked Marry Doria Russels novel, chances are you will enjoy Grass very much. If you didn’t, this novel might still appeal to yo because it is sufficiently different both in tone as in topic matter. In either case, I highly recommend picking it up.

Last night I got an email from a long time subscriber who read the book based on my glowing review, and had a very different take on it. Hopefully she can post a comment on here as well, but I figured it would be good to update the post to bring up some of the important points she mentioned.

I completely failed to mention this in the review, but the book should have a trigger warning because Tepper does use rape for dramatic effect. So be aware of that going in.

Also, the protagonist does have a rather skewed value system, especially with respect to gender roles and relationships. While I didn’t necessarily agree with her convictions I sort of took them as part of the characterization and “baggage” she had to go through on her journey. But it might be that I was just giving the writer to much credit. Tepper ain’t LeGuin and perhaps calling Majorie a strong female protagonist is overly generous.


2 Responses to Grass by Sheri Tepper