If you have been following my blog for a while, you might remember my 2008 post about silly D&D monsters. It was more or less just an elaborate link-blog to the Head Injury Theather post on the same subject. The gist of these post was that D&D had some really goofy monsters in the past. Some of them were incredibly silly and pointless, while others just bizarre and actually kinda cool.

D&D is not the only RPG system that has ludicrous beasts in their bestiary. Just about every Fantasy system has at least a few off-beat monsters. Likewise, SF universes tend to be full of face-palm worthy aliens. These creatures exist in the rule-books, but rarely get much play for the obvious reasons. They are either to silly or to weird to fit into most campaigns, and so they are relegated to the role of obligatory inside jokes between game masters and players.

I figured it could be worth while to dig out some of these silly creatures and take a closer look at them, see how they work and what is their official justification for existence. I don’t just want to mock these creatures (although I presume I will be doing a lot of that too) but also examine whether or not they could be cool given a proper setting and campaign. Someone, somewhere at some point in time was paid to sit down and dream up stats for these oddities, so it would be interesting to examine their motivations and intentions. I want to do dig deep, investigate and report on the history of worlds goofiest monsters, if that makes sense.

This excise could be implemented as a more research oriented series running parallel and along side of my more creative reinventing fantasy races bit.

What’s a better way of starting such a series, than with a closer look at undeniably one of the silliest and most pointless D&D monsters: the Duckbunny. 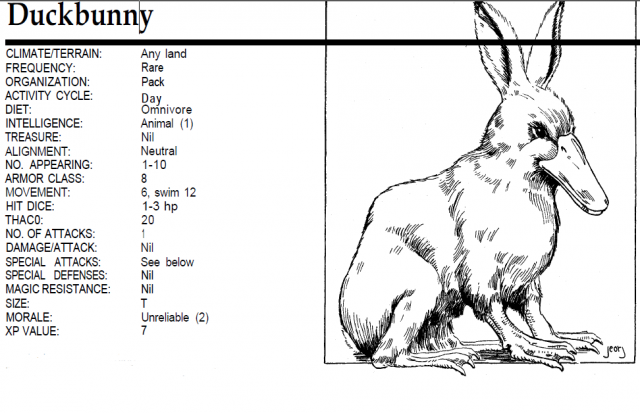 When modern role players learn about this goofy beast, they usually assume it was a product of the old school monster design that harkens back to the prehistoric time when the game was still known as Chainmail in some circles. Duckbunny is viewed as a late 70’s monster, probably created under the influence of one of the many recreational hallucinogens everyone was taking back then. This assumption could not be more wrong.

The fluffy amphibian was actually created in late 90’s. It’s first appearance can be traced to 243rd issue of the Dragon Magazine published in January of 1998. That’s right ladies and gentlemen, the long eared duck is only 16 years old. By human standards it is not even old enough to drink. That said, in internet years it is virtually antediluvian which probably explains it’s popularity (or rather its’ infamy).

The original concept was created by Johnathan M. Richards and the above artwork was drawn by George Vrbanic. It is probably worth noting that while most D&D monsters go through many redesigns between editions Vabranic’s interpretation of the Duckbunny is the dominant and enduring depiction of the creature in all the available literature. Though this is probably due to the fact no one really considers it worth drawing…

I was able to track down the above mentioned issue of the Dragon Magazine and upon reading the original AD&D lore entry I must admit it makes a lot of sense. Duckbunny might be really silly, but it is a legit monster. It’s origin story makes perfect sense.

It all goes back to the age old question: “Where do Owlbears come from?”

The Owlbear is actually one of those old school Chainmail era monsters that predates the Dungeons & Dragons brand itself. An article titled “Ecology of the Rust Monster” published in Dragon Magazine #88 (1984) explains that the Bulette, Rust Monster and Owlbear designs were inspired by plastic toy figurines (made by an unknown Hong Kong company) which Gary Gyrax once bought at a dollar store once and later decided to use as miniatures in his Chainmail dungeon crawls. Tony DiTerlizzi actually found the original toys that inspired Gyrax on eBay, and took pictures of them posing alongside their original artwork in the monster manual. Here is a photo of the original yellow plastic Owlbear: 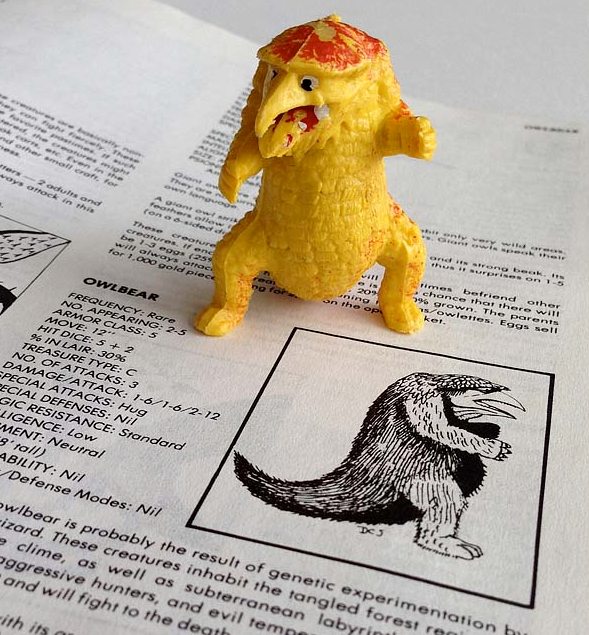 The toy that inspired the Owlbear monster.

In other words, the creature really has no justification for existence other than the GM fiat. It looks cool, therefore it exists. This sort of philosophy worked well for the early D&D fans who just wanted to crawl dungeons. But by the time Advanced Dungeons & Dragons rolled around, people started to expect better and more consistent lore. Fans started asking: How come Owlbears?

While kinky sex between an owl and a bear might be a hoot to imagine, we know that biology does not work this way, even in imaginary, magical universes. Asking players to believe that such a mating is possible, or that a hybrid animal that is a composite of two existing species evolved naturally was skirting close to breaking the willing suspension of disbelief. So TSR felt obliged to respond the best it could by waving hands and using their standard, boilerplate response: Because wizards.

By the late 90’s role players tastes got sophisticated enough to look through a wizard did it bullshit, and so Johnathan M. Richards took it upon himself to ground the Owlbear in the cannon by contextualizing the practice of creating hybrid animals as something that wizards do for fun and profit. He did so by devoting entire Dragons Bestiary column in Dragon Magazine #243 to, as he called them, “Magical Crossbreeds”.

Magical crosbreeding is becoming more common as wizards learn the intricate processes involved in merging one life form with another. Several creatures familiar to those who adventure in an AD&D® game world have been around a long time; others are only now being developed. Perhaps the most well-known magical crossbreed in the AD&D® game is the owlbear, a monster originally created by a wizard’s magical merging of an owl and a bear, presumably to take the most beneficial traits of each animal and duplicate them in a single creature. Thus, the owlbear is gifted with the bears strength, stamina, and claws, as well as the owl’s senses (particularly hearing and sight). However,
while it sounds good in theory, the owlbear was probably somewhat of a disappointment to the first wizard who created one, for its foul disposition makes it difficult, if not downright impossible, to train.

Everyone agrees that Owlbears are cool. They are big, scary and poweful. If you owned a magical tome that described how to create one, wouldn’t you want to give it a try? I guess most Wizards find it hard to resist the temptation. That said, Owlbears are not do well as pets or beasts of burden. Neither owls nor bears are particularly known for being easy to train or domesticate. You’d have to imagine that there is a limited number of resources for practicing wizards, so if Owlbear creation is described in some popular magic tome, it is no wonder that many wizards try it, and then release their creations into the wild upon realizing they are troublesome to keep. Hence the beasts are most frequently seen wandering in the woods rather than accompanying Wizardly folk. It goes to reason that most mages being scholars and not animal trainers or beast masters release their Owlbears into the wild shortly upon creation. Assuming the hybrids are not sterile magical colleges in larger cities could potentially pump out enough of these beasts each semester to build up a breeding population over a decade or two…

That said, Owlbears are both expensive to make and dangerous to handle. A wizard’s apprentice must start somewhere, and an Owlbear creation is probably not considered a novice spell.

Magical crossbreeding is a dangerous endeavor. Rather than start experimenting in this field with potentially lethal creatures like the owlbear, most wizards prefer to begin their efforts with tamer, less deadly beasts. In this respect, duckbunnies are perfect candidates for the enterprising young mage just beginning his journey on the path of the crossbreeder. Made from harmless creatures of two separate types of animals—a mammal and a bird—the duckbunny provides a valuable lesson in crossbreeding magic.

And there you have it. The Duckbunny is basically the Hello World of arcane hybridization rituals: a novice level spell that apprentices and inexperienced wizards use to train their skills, so that they can one day create fearsome beasts such as Owlbears. It might be silly, but it makes perfect sense: both in terms of lore as well as a meta-game explanation. It is a hybrid of two animals that are both plentiful and inexpensive to obtain in a medieval world. Not only is it cute and fluffy, but it is also edible.

Not all bizarre RPG monsters have this much forethought put into them. Some are utterly baffling and incomprehensible. Duckbunny is not one of these. Still, a question remains: what is the point of even having a stat block for such a creature? Why not just mention it in a lore and be done with it?

I guess the answer is: a pure lore entry does not allow for a critical fumble when a munchkin goes on a Duckbunny killing spree because he is 50XP (or 8 Duckbunnies) away from leveling up…

This entry was posted in rpg and tabletop and tagged bizarre bestiary. Bookmark the permalink.