I have noticed that my comics category is almost entirely devoid of content. It’s not like I don’t read comic books either. I guess I’m just a bit more picky about what I read. If I had this blog back during my brief infatuation with the popular Marvel and DC lineups, this would have probably been the category with most posts. Especially since I gamed on the Amiga back then (which was in it’s death throes) and I was yet to discover pen and paper Role Playing. So super heroes and mutants were my escapist drug of choice for a while.

I think the main reason I fell out of love with the mainstream Marvel and DC comics was because their quality was inconsistent. The series could have a gripping story line that I cared about, drawn by artist I enjoyed one month, only to be handed over to completely different group of people with different sensibilities and different vision the next. Since then I’ve been gravitating more towards graphic novel type comics, or creator controlled series where the original vision and themes can be maintained without too much executive meddling.

There is actually a few comic series that I’ve been wanting to write about lately, but the most recent and up to date is Prophet. I stumbled upon this title while browsing a “best of” list published by comics alliance, and found it in the “most weirdest” section. So naturally I felt compelled to check it out. Luck had it, that the entire series was available in digital format on Comixology a mere click away. 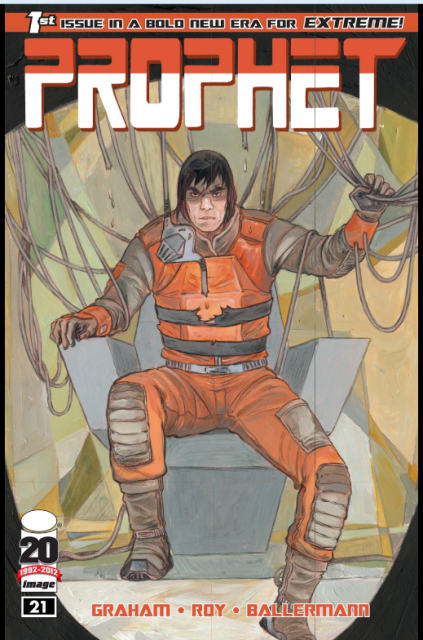 Before I go any further, can we talk for a second about digital comics? Personally, I think the digitization of the medium is probably the best thing that could have ever happened for it. Back when I was inhaling Spider-Man and X-Men issues I had to actually physically go to the comic book store to purchase the latest issue. And if I wanted back-issues of something, I literally had to make some sort of an evil pact with the asshole behind the counter so that he could put in a special order for me. Today, if I want to read a comic series from start to finish, all I need to do is to sign up with one of the many online vendors, give them my credit card and suck the digital copies down the internet pipe. It is glorious.

Comixology is a bit like Steam for comics in that it is a publisher independent vendor who aims to be your one-stop-shop for digital picture books. They also have a quite evil tendency to give the first issue of each popular series away for free to wet your appetite. So if you want to check Proghet out, you can do it at no cost here.

If you clicked on the series link I posted above, you might be wandering what this bullshit is all about: 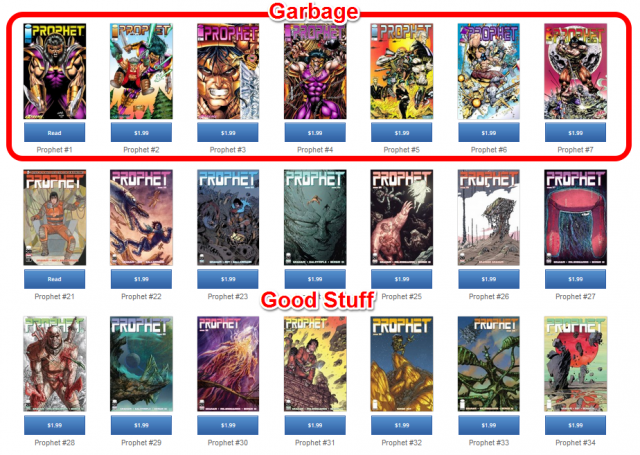 I guess this requires a little bit of history. The issues #1-7 available via Comixology are part of the old run of the comic. Prophet is actually an old Image Comics property from the early 90’s. Around 1992 Rob Liefeld was pitching a re-imagined version of Teen Titans to DC Comics, but the deal never fell through. Instead ditching the project however, he simply re-named and re-branded the characters and turned them into Youngblood super-hero team and published it via Image Comics. Prophet was Liefeld’s original creation was originally intended to appear in Marvel’s X-Force. But that never happened either, so he became a Youngblood instead, and later was spun off into his own series which lasted for seven issues which you can read via Comixology. It’s quite awful.

In 2012 Image Comics gave the character of Prophet (as well as the few other associated Youngblood heroes) to Brandon Graham and Simon Roy and essentially told them to go nuts with it. It was a completely dead franchise that wasn’t making any money, and which no one was particularly attached to, so the artist/writer team basically got an executive blessing to re-mould the hero into something entirely different. And they did exactly that. They stuffed their super-soldier hero into a cryo pod, and made him wake up thousands of years int the future, long after humanity went extinct. 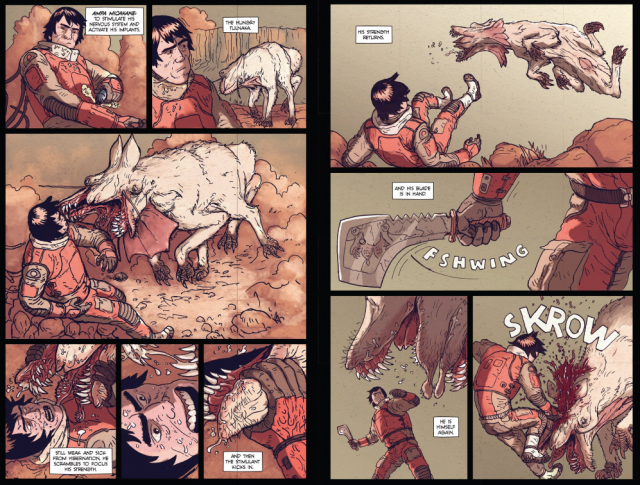 Prophet Issue #21 – after awakening John Prophet finds himself on Earth which is no longer even remotely familiar to him after thousands of years of evolution changed the local wild life.

The 2012 series revival kept the original numbering, and launched with issue #21 which is confusing as all hell at first, but you quickly realize that Simon Roy’s distinctive art style is so different from the early 90’s stuff the two runs are impossible to mix up.

The first three issues follow the cryogenically unfrozen John Prophet who wakes up thousands of years too late to fulfill a mission assigned to him by what he refers to as the Earth Empire. Said empire is long gone and ruins of human civilization have crumbled to dust or have been overgrown by wildlife which have evolved beyond recognition. Prophet finds ruins of civilization, but they are not of human origin but rather structures build by some alien races that have also went extinct while he slumbered. The current masters of the planet seem to be members of a dozen different alien species (none of which is bipedal or humanoid) who have came from elsewhere in the galaxy, but have since then reverted to a low-tech, tribal lifestyle. 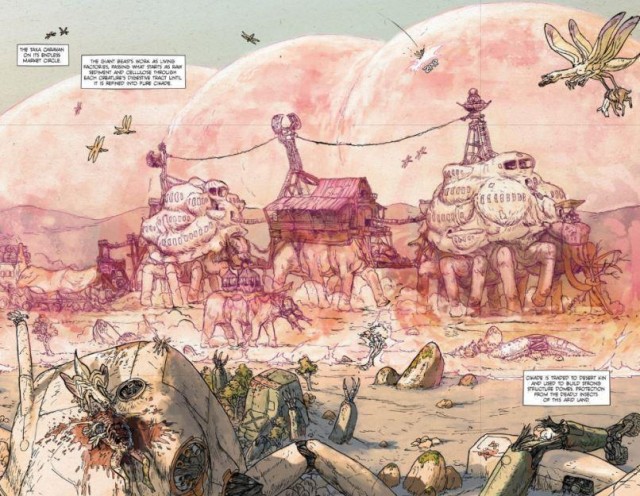 The Caravan from Issue #22

What starts as a story of a man out of time trying to find his purpose in a world of organic cities built by burrowing inside a carcass of a living space ship, or caravans that refine organic matter into a super-strong building material by passing it through the digestive systems of multiple gigantic beasts of burden in a sequence, quickly spirals out of control into something much bigger. It becomes a story of an ancient galactic war which once almost destroyed the entire universe, and left most of it in ruins. A story about rekindling old alliances, and re-awakening ancient heroes to face a new, unimaginably powerful threat. A story about impossibly ancient space gods battling for supremacy using mortals as pawns.

John Prophet re-unites with his old allies (an immortal cyborg who seeks to re-discover his long lost humanity, a living root addicted to fire water, a lizard woman assassin and an egg shaped battle droid) and seeks to once again defend the universe from the dreaded Earth Empire that once almost destroyed it. And because the the comic is firmly set in the Image Comics continuity, albeit in very distant and previously unexplored future, other members of the Youngblood team make small but memorable and unusual cameos. For example, Badrock who started as a teenager with a skin made of living rock is now an immortal, omnipresent space deity whose planet-sized children are scattered throughout the universe, slumbering while alien races build cities on top of their bodies. 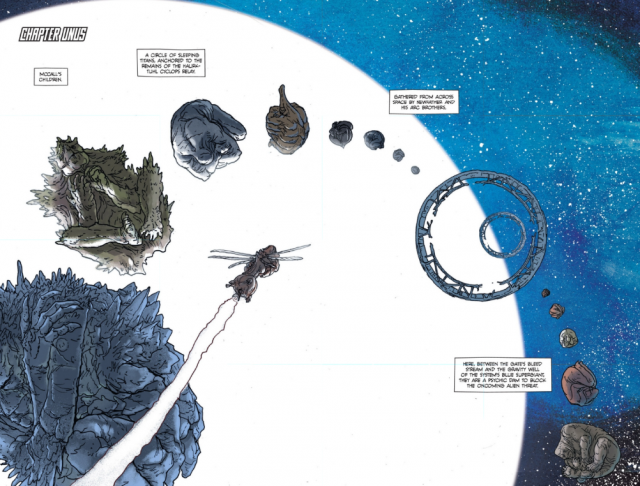 The series is deliciously weird, twisted and strikingly original. It’s weirdness factor is reminiscent of David Lynches Dune with an artwork that is probably best described as something Van Hamme would draw after going on a 16 year long crack cocaine binge. Some issues are very much Conan the Barbarian but in space, and with crazy-SF concepts instead of magic. Other issues are twisted space opera full of eldritch space gods that make Marvel’s esoteric pantheon of great powers look bland and uninteresting in comparison.

The writers and artists have an incredible knack for creating a universe that feels old, lived in, and filled with mystery and rich mythology. Pretty much everything in Prophet-verse is old, decrepit and ravaged by past wars. Ancient, crumbling mega-structures, cities built on calcified and shattered bodies of dead space gods, a flotilla of spaceships damaged in forgotten war converted into a sprawling zero-g metropolis. Every sett piece is stranger than the previous one. And as soon as you think you have a good grasp on the setting they switch it up and make it weirder. Prophet is probably the most imaginative, and evocative comic I have read in years. 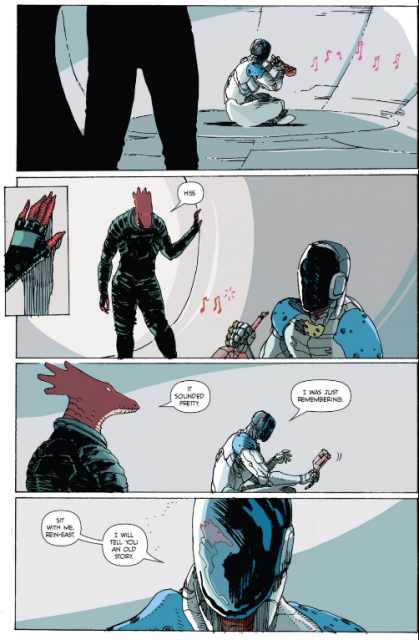 These are characters introduced later in the series. The robotic Diehard is also a former Youngblood hero, now turned to an immortal cyborg who rebuilds his humanity by installing human organs in his chassis which he harvests from John Prophet clones he kills in battle. The Lizard girl is a young assassin who swore to fight for Old Man Prophet when he rescued her from prison.

The story itself is interesting, albeit a bit convoluted. Prophet is first and foremost concerned with showing, rather than telling. You have to piece the plot together yourself from little bits of exposition here and there, and everything is seeped in mystery and feels like a one big puzzle. A puzzle that may or may not have a real solution as the series is not finished yet. But even if it ends on an open ended and vague note, it will still have been a hell of a ride.

It is not devoid of interesting characters. In fact, once the Old Man Prophet enters the play and starts to re-unite his team the story really picks up. Before that, the standard routine seems to be very Conan-esque. Prophet arrives somewhere, fucks shit up, then leaves. But when the original progenitor of the Earth Empire’s clone army wakes up from his slumber, the plot thickens, becomes more complex and introduces really cool characters such as Diehard or Brother Root. While the series is most memorable for it’s weirdness, and it’s off-beat ideas and set pieces, the few quiet moments of bonding and character development between these heroes are executed extremely well.

I highly recommend checking it out. Especially since you can read the first issue online for free. From what I have heard, the series will be wrapping up this year, so it is not one of these endless sprawling series that meander until they get cancelled. As far as I can tell, the creators intend to make it into a cohesive, self-contained story collected in four to five collected volumes.