X-Men: Days of Future Past

Days of Future Past works as an X-Men movie but as far as super-hero films go, we have seen much better. In fact, we have already seen a much better mutant related motion picture in the form of The First Class. Despite a star studded cast, combining the best of both the old and the new X-family, it does not have the emotional depth of it’s direct predecessor. But, at the very least it manages not to be boring.

The main purpose of Days is to reconcile the two distinct continuities of the X-Men movieverse into a singe universe via a complicated time travel story. Because nothing says continuity like a stable rime loop or two, right? Time travel stories built to fuck around with established cannon are inherently risky business and one must immediately ask if such gimmicky maneuver absolutely necessary for the franchise. After all Sony has been successfully rebooting Spider-Man so often he is soon going to have as many incarnations as Doctor Who, and yet his movies continue making money.

I think that Fox could have simply pretended that the first three films have never happened and built upon the very solid foundation that was The First Class. But that did not happen. Someone, somewhere decided that this was not the best approach, and that instead an attempt should be made to reconcile the X-universes. Perhaps the studio want to give up on a 15 year old project. Or maybe they simply could not pass up the opportunity to dust off the old contracts for the original X-Men stars and shoe-horn them into a new mega-production. I have no clue if this call was made by Vaughn, Singer or some executive from the Marketing & Merchandise department bit it doesn’t really matter. What matters is that a choice was made to adapt the 1981 Chris Claremont time travel story with the same title and use it to provide an in-universe explanation for the inconsistencies between the new and the old movies. And it sort-of works, but only as long as you don’t ask too many questions… 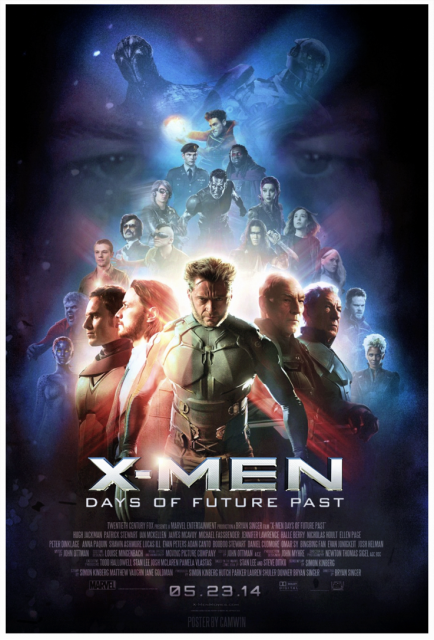 For example, how come Kitty Pryde has time traveling powers now? She didn’t have these powers in the comics, and she showed no signs of them the last time we have seen her on the silver screen. So what gives? Can anyone explain this?

The answer provided by Singer and Vaughn is: don’t worry about it. It is fridge logic. You are just supposed to go with it, and not look into it too much. But that’s hard considering it is the crux of the plot.

The entire story only makes sense if the audience buys into the premise that Shadowcat can somehow send Wolverine back into the past. But it is never explained why or how she inexplicably gained these convenient new powers. If you step back, and think about it in terms of scriptwriting, casting and marketing it makes perfect sense. Singer got Ellen Page on board and he needed to write her some scenes. In the original Chris Clarmont story it is Kitty who is sent from the future into the present with the aid of Rachel Summers and her Phoenix level psychic powers. Naturally in the X-Men movieverse, Rachel cannot possibly exist due to the fact her parents (Jean Gray and Scott Summers) have been killed off. Singer and his writing team decided to push the events of the story few decades back, so that they could tie it to First Class thus making it inaccessible to Kitty herself. Seeing how Hugh Jackman’s Wolverine is the most popular and marketable hero of this universe he becomes the protagonist, whereas Page is relegated to the role of the the time machine. Keeping Kitty Pryde somehow involved in the time-travel shenanigans may be seen, if nothing else, as a continuity nod towards the source material. In other words, I get it. I understand why, but only when I throw my suspension of disbelief out the window, and analyze it as a commercial entertainment product. In-universe, however, where mutants have fairly stable, and defined power sets, it makes no sense at all. And that’s really bad.

Here is another question: how come Wolverine is the only eligible time traveler? Shadowcat explains that her powers would rip a normal person’s mind apart, if she attempted to send them a few decades into the past. Why? Don’t worry about it. Wolverine has regeneration powers though, so he should be able to handle it. But Profesor X has awesome Psychic powers, shouldn’t he be even more capable of withstanding a psychic time displacement? Apparently not. Why? Don’t worry about it.

I could keep enumerating the countless plot holes, and continuity problems, but I think you get the idea. The writing is really sloppy and the story does not feel organic at all.

The First Class was, for the most part, a Jennifer Lawrence driven story. Mystique was a vibrant, well written character, and her inner struggle between good and evil was the focal point of the movie. In Days of Future Past she is relegated to at-best a supporting character. She is neither the protagonist, nor the main villain, While her actions are said to decide the future she has virtually no agency, and we don’t really see her side of the story. She is a cipher whose actions and motivations are purposefully left ambiguous. She pops in for a scene, does some martial arts and then leaves – much like the Rebecca Romijn’s incarnation. It feels like a massive downgrade. Lawrence has absolutely nothing to work with, and frankly she seems kinda bored. Her performance was one of the best tings in First Class but here, she is basically making an extended cameo. Even the big decision she has to make during the epic climax, is not really hers. It is fulfillment of Xavier’s story arc, who learns not to be a controlling jerk, and persuades Mysqique to show mercy by finally setting her free.

Ellen Page is similarly wasted. She spends the entire movie sitting on a bench cradling Jackman’s head and whimpering while Patrick Stewart and Ian McKellen watch her trying to silently act out every shade of “worried” known to man. They are damn good at it, but Jesus, what a waste. They are all really good actors, who could have been doing interesting things, but they are not. There is nothing for the future X-Men to do but wait for the Sentinels to come, and then make a final stand and die. And they do, and it’s awesome, but nevertheless it is a criminal misuse of talent.

The only actor that actually has his hands full in this film is Hugh Jackman. In fact, they could have easily called this movie “Wolverine: Days of Future Past”, except they wouldn’t have because it turns out that no one wants to see solo Wolverine movies after the Origins disaster.

This might be an unpopular opinion, but I personally find Wolverine a bit boring. I mean, don’t get me wrong, he is still awesome, but I think that at this point we have seen enough of him. He is the single, most fleshed out character in the X-Men movie-verse, appearing in no less than five movies, two of which were solo titles. Any possible conflict he might have had, has been already resolved and beaten into the ground. He also happens to be the one X-Man cannot physically die. In X3 it was established that he can regenerate faster than Dark Phoenix can rip him apart at the atomic level. The only potential threat to Wolverine is Magnetto who can control his Admantium laced skeleton, making him into a living meat puppet…But of course, the past version of Wolverine in Days, does not have the Admantium yet. In other words, he is virtually too OP for this mission. Singer seems to realize this at some level, which is why he forces him to use diplomacy and cunning instead of brute force. He sets him up as a mentor to the young Xavier who has an all too convenient case of temporary mental breakdown.

Given the events of First Class it doesn’t really make sense for the young Professor X to mope around the X-mansion, wallowing in self pity and drinking himself stupid. But he does because it helps to pad out the plot. It gives both him and Wolverine intersecting character arcs (a student becomes a teachers, etc..) and does provide a tiny little bit of tension, since the only possible way the mission can fail is if they runnin out of time.

Of course, Xavier’s inexplicable condition comes with a truck-load of brand new plot holes. For example, the serum he is taking to fix his spine also temporarily blocks out his mutant powers and somehow masks his X-gene making him indistinguishable from baseline humans and invisible to Sentinels. Having access to this sort of wonder-serum would have been been quite convenient during the events of the first three X-Men movies, and in the dark apocalyptic future. But it seems that both Professor X and The Beast somehow managed to forget about it. But I digress. I promised to shut up about the plot holes.

Despite sloppy writing, the film does have some good parts. There is enough good there to make you want to overlook its flaws.

For example, Peter Dinklage is awesome as Bolivar Trask. I really appreciate the fact his character was written as a straight-up mutant hating bigot. I went in fully expecting the writers to try capitalizing on Dinklage’s short stature by making Trask’s primary motivation to be self-loathing, or perhaps jealousy (that instead awesomeness of the X-gene he was born with a mundane dwarfism mutation). But they didn’t go there. Trask is just a hateful dude, who just happens to be short. He was not written as a little person: he is just played by one. I think this is really awesome. I hope that this becomes a trend, and opens all kinds of doors not only for Dinkelage but for all people of short stature working in the film industry.

The action scenes are good. There are bunch of beautifully realized set pieces, and well choreographed sequences. The future sentinels are absolutely viscous and unrelenting killing machines that are more than a match for the X-Men. The sheer carnage they cause is entertaining to watch. The title of this movie’s ultimate bad-ass, however, goes to Magneto. Between McKellen tossing around jet-planes and Fassbender juggling sport stadiums in the air, the audience is left with no doubt that this guy is the primary X-villain that is not to be trifled with.

But as powerful as Magnetto might appear, the post-credits teaser reveals the arrival someone even more powerful: Apocalypse. Whether Erik Lehnsherr will become one of his four riders, or do a heel-face-turn to join forces with X-Men is anyone’s guess. But it is an exciting perspective. In fact, that teaser might actually be the best thing about Days of Future Past.

This is what this movie is: a setup, a trailer. It shuffles the deck, resets the events of the first three movies, resurrects prominent comic book characters and sets the stage for future installments. It is a filler episode that undertakes emergency lore maintenance, while at the same time trying to tease you and wet your appetite for what is yet to come. Not bad, but not great either. Definitely better than Wolverine: Origins and X3 but not nearly as good as The First Class, or anything that Marvel is offering. It’s a fun summer diversion, if anything.

This entry was posted in movies and tagged review, x-men. Bookmark the permalink.


One Response to X-Men: Days of Future Past