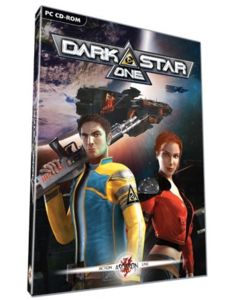 As you may or may not know, I love space trading sims. There is just something liberating about flying out in space, and dogfighting among the stars. So few days ago I picked up Darkstar One. It’s to early to write a review – I just did several introductory and training missions, and didn’t really get a feel for the game.

My first impression is that it is very similar to Freelancer. The scale of objects is similar (ie space stations and planets are smaller than they should be), and so is the object of the game (to gain in power by trading and fighting). Unlike freelancer you are locked into a single ship for the whole game. Fortunately, you can upgrade the ship by finding special shiny green artifacts inside asteroids. There is a RPG element in the game, since you actually get to choose which component of the ship is upgraded: hull (more hp, better shields), wings (more weapon mount points, better maneuverability) or engines (more speed and etc..).

Just as with Freelancer you can’t enter atmosphere of a planet – your ship will get destroyed if you do. You can however sometimes enter mining shafts on large asteroids. This is actually how you find most of the upgrade artifacts in the game.

The universe seems more fractured than in Freelancer, where each system had multiple planets, stations and capital ships you could land on. In Darkstar One you usually see a single planet 1-2 stations, and an asteroid belt if you are lucky. The get from system to system you need to do hyperspace jumps. In effect the space seems less busy. In freelancer there was constant movements, and traffic at the jump gates. Sometimes you had to wait for a convoy to pass though to make a jump or take a trade lane. There is no such movement in this game.

The voice acting is dreadful. The early cut scenes made me cringe repeatedly. The main character (ie. you) is very annoying. It’s scary to think what horrible torture I might be submitted as the story progresses and that dude gets more lines. Ugh..

All in all, I think Freelancer was a better game. But then again, maybe it gets better with thime.