Let me paint you a story here. Imagine it’s 1944, D-Day +5 or +6 – you lost count by now. You were dropped somewhere in the middle of the France along with your paratrooper unit. Or at least that was the plan, but of course the drop went a little awry, and no company landed on the ground in full force. So you are fighting alongside a rag tag group patched together from separate units, operating behind enemy lines.

One night you are patrolling the area, and you get pinned down behind a waist high wooden fence – pitifully bad cover that gives you no protection from enemy bullets. Beyond the fence is a big ditch that you could crawl into – a perfect cover and firing position. Your buddies are sitting behind some shed a little way back but there is no hope of reaching them. The only thing you can do is to hop over the fence as the rest of your squad unleashes a suppressing volley at the enemy position. All you have to do is to grip the fence and roll yourself over it. 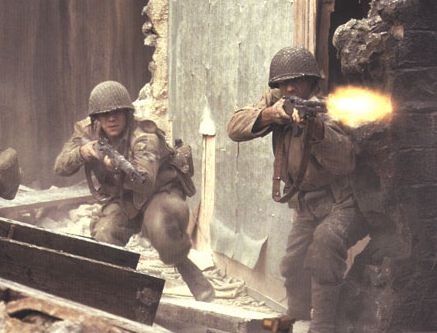 But… Fuck. It’s to high. The fucking fence is like 2″ higher than the height you can actually jump. Apparently the level designer decided to make this fence insurmountable, because you have to crawl alongside it all the way to the extreme left edge of the map so that you can find the grenade pack, and the key card… It’s even funnier if on your way back this flimsy, rickety fence turns out impervious to those grenades, which in other section of the game actually can be used to blow up tanks and armored cars. And sometimes that fence is a hedge or a shrubbery…

There is just nothing that destroys immersion and screams “poor level design” as that fucking waist high wall that you can shoot over, but for some reason can’t climb or jump over. This is the worst kind of railroading and no one appreciates that. Scifi games can sometimes get away with obstacles like that by coming up with some kind of force field mechanic. Same goes for fantasy and magical barriers. They are annoying, but not ridiculously unrealistic within the logic framework of the game universe. But present day or historical games have no business using such cheep gimmicks.

And it’s really not that hard to enforce an off-limit zone without some sort of artificial boundary by simply tweaking game mechanics. Give the AI good accuracy so that they can take down players that decide to use the “run and gun” tactic, while at the same time making shooting from behind cover relatively safe (ie. if you are partially covered, enemy gets huge penalty on aimed shots). Hell you can even use the old dirty trick from stealth games – if the enemy spots you they raise an alarm and all of a sudden everyone leaves their post and chases after you. Things like that will actually make player want to stick to the cover. And if you don’t want the hoping over a fence, don’t put a safe looking cover just beyond it – make it a killing field for many feet from each side with well dug out enemy defending it.

If you do that, the player will actually want to figure out the better way of doing this. Hell, going the extra mile along the side of that fence will actually make them feel like a smart strategic choice even though they will be following the same type of railroaded track. Instead of imposting the scripted path as the only possibility, why not give the player an illusion of free choices, even if 9 0ut of 10 of those choices are designed to be nearly suicidal. Figuring out the best path is always more enjoyable than following one because there is just no other choice.

I’m playing Brothers in Arms: Earned in Blood (without Starforce – :twisted:) right now and the game is plagued with the waist high fences, indestructible hedges and simillar crap. And the funny thing is – the game already revolves around strategically using your squads to lay down suppressive fire and flanking the enemy. But there is not much strategy involved here since the game keeps your firmly on rails making you follow intricate scripted paths. Sigh… Still, it’s not a bad game – it’s just that I feel silly every time when it turns out that a highly trained soldier can’t jump over a fallen log, and must walk around a waist height obstacles that are used to block off certain streets or areas of the map…

This entry was posted in video games and tagged rant. Bookmark the permalink.