This is part 3 of the review. If for some reason missed the previous 2 parts, you can find them here.

Both Morrowind and Oblivion had a follower system that allowed other characters to join your party and assist you in combat. In both of these games this was an endless nuisance. The followers would constantly get stuck on terrain features and be incredibly trigger happy. Very often the character you were supposed to be escorting would detect an enemy you haven’t even seen yet (for example, a monster hiding behind a corner) and recklessly abandon you and run to fight it. This usually happened when you were looking the other way.

The only reliable way to deal with followers was to tell them to sit tight, scout ahead, clear the area of enemies and then come back for them.

Fallout 3 seems to worked out several kinks out of this system – at least for some of the follower characters. As far as I can tell the human followers still act like idiots most of the time. But they hardly ever clip on the terrain and become stuck – at least from what I checked. If they do get stuck, all you need to do is to travel to a new cell (ie. exit or enter a building) and they will get magically transported to you – kinda like in Oblivion.

Fallout 3 introduces something new though: a pet follower. This is something that was done in countless mods to previous Bethsheda games. Clearly, people always wanted to have a dog following them around on their adventures. Now you can. Fallout 3 features a pet follower called Dogmeat. I believe he was featured in the previous Fallout games as well. He is a non-hostile NPC that you can meet around the scrapyard area. 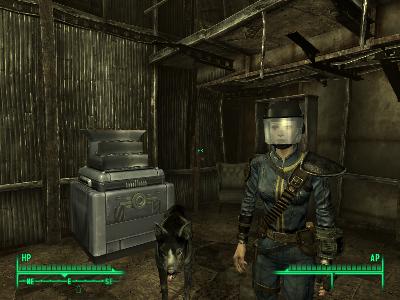 Rather than being a nuisance however, Dogmeat actually adds to the game play. For example, he is very good at spotting enemies but he doesn’t usually run up and charge them. Instead he stays at your side and growls at them which is an excellent early warning system. I can’t tell you how many times this has saved my skin. Ever since I met this dog, I have never been ambushed from behind by an enemy I didn’t see.

When you do get close enough to the enemy and engage him, he will swoop in for a kill. This is usually desirable since it will usually provide a great distraction. It allows you to actually run up to the enemy as it is preoccupied fighting off an angry dog and get a point-blank head-shot with a shotgun or other high powered weapon. I especially liked having him around during the stupid fire-ant mission. He would engage the ants head on, and I would flank them and kill them from close range without getting barbecued.

Dogmeats life regenerates in between combats so you actually don’t have to worry that much about his maintenance. You can however give him a stimpack by talking to him if his health is getting low during a prolonged fight.

You can also ask him to search for items such as chems, weapons, ammo or food. This can sometimes be useful when you are trying to locate something specific. If he is getting in your way (or you are on a mission that requires stealth) you can always order him to go back to Vault 101 location and pick him up later.

His path finding algorithm is pretty good and he is usually able to follow you just about everywhere. Then again, when I was doing the Germantown mission I chose to enter the fenced off area from one direction while the stupid dog ran all the way around and entered it from the opposite side engaging the two supermutants that were patrolling the area. In the end it worked out fine since it created a great diversion. Still, it shows that the much improved path finding does not always work.

The combat in Fallout 3 is similar to what I was used to from Oblivion. Only now it has guns. One great addition to it is the V.A.T.S. system which allows you to pause the action and take carefully aimed shots. Each of them takes several action points which regenerate over time.

Some people hate this system, but I personally like it very much. It makes the combat less about frantic circle strafing and more about tactics. For example with V.A.T.S. you can try to disarm the guy with the bazooka by shooting at his arms. Or you can conserve your precious ammo by shooting Mirelurks in the face instead of bouncing bullets off their hard carapace. 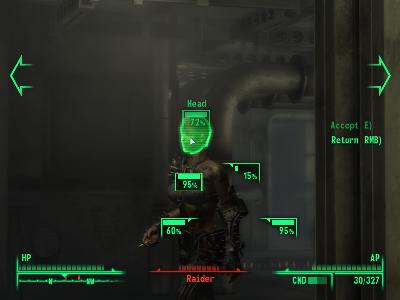 Also, it makes for some fun, cinematic events. Whenever you kill someone in V.A.T.S. mode their death will be shown in a slow-motion closeup and more animated than normal. Great example of this was battle with the sniper in Minefield town. I hid behind a rock, took a V.A.T.S. shot at the crazy guy at the top of the ruined tower with my hunting rifle and… His head fell off in slow motion. It was almost like a bullet-time animation with the spinning camera following my round as it exited the barrel of my gun and hit the target. How awesome is that?

When you are out of V.A.T.S. the combat is still fairly fun. Melee feels just like Oblivion with the RMB used for parry. When using a firearm, RMB is the “aim down the sight” mode that many FPS games employ these days. It zooms in at the target a little bit and gives you better accuracy but it makes you move slower.

When I first emerged from the Vault all I could say was “Wow!”. The Capital Wasteland is positively stunning. There is a certain sublime beauty to the desolate, ruined landscape you see at the begging of the game. And it only gets better from there. 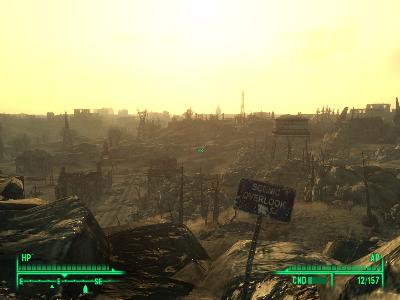 The game looks and feels much different from the Elder Scrolls titles that preceded it. It has a bit of a Mad Max vibe, a little bit of modern Scifi and metality and definite retro style making it a unique mix. All the the robots look as if they were taken out of old TV shows such as “Lost in Space” for example. The music that plays on the radio is a collection of old classics which are almost perfect for this settings – especially the very apropos “I Don’t Want to Set the World on Fire” track which was so effectively used in the trailers for this game.

I don’t know – there is just something unreal about walking around a burned ruins of DC, carrying your laser rifle and fighting with supermutants while that song plays in the background. It is something that must be experienced. 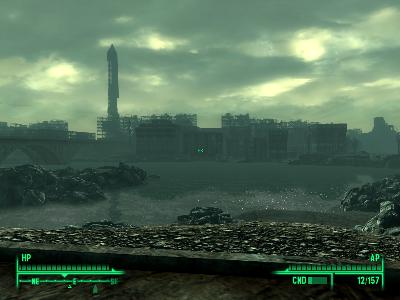 I’d say that this game is worth playing just for the experience. There are the stunning vistas of ruined cities, the old music on the radio, the modern sounding DJ who comments on your actions and completed quests, the retro robots, the post apocalyptic setting, the funny Fallout Boy graphics, the humorous signs and billboards. It is an incredible and unique mix. Soon after I started playing this game, I got sucked into it’s atmosphere and totally forgot all of it’s flaws. 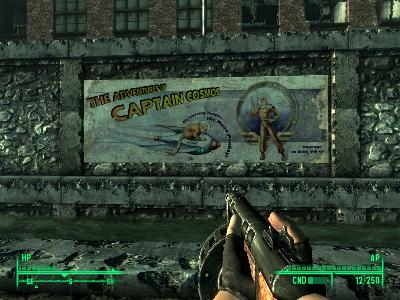 I can’t say how much does the game deviate from the setting portrayed in the two original Fallout games since I haven’t played them. From what I heard it is rather shallow and only exposes a fraction of this fascinating setting. Still, I love it nonetheless.

Setting wise, this game somewhat reminded me of S.T.A.L.K.E.R.. It featured similar irradiated wastelands and combat situations. The two are actually very different. S.T.A.L.K.E.R. is modern, gritty and serious, while Fallout 3 is retro and often campy and/or funny. It is also much more polished with better interface, better map, better NPC interaction and a world that is much more open. 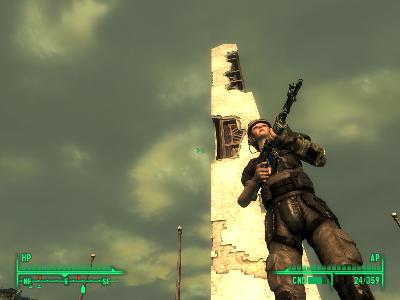 Fallout 3 has almost no insurmountable waist high fences but it does make a liberal use of rubble and ruins and occasional un-scalable chain link fence. The walls around some of the towns (like Big Town or Paradise Falls) often look as if they were about to fall over but at least they are tall enough to give you an idea that scaling them is probably not going to be easy. That said, with some careful well timed jumps you can often bypass these artificial walls.

Once you start visiting the DC area however things change. The whole city is designed as dozens of cells that are interconnected by ghoul infested metro tunnels. It took me hours to find the radio station because I was trying to find a surface route there. There is none. To get to some parts of the city you need to hit the tunnels and/or sewer systems. It’s difficult to navigate this maze, and you will be lost a lot. Fortunately after 3 or 4 hours of aimless wandering you will find enough DC based map markers that your quest destination areas will be at most one tuner crawl away from a fast travel point.

Another thing that bothered me in this game was the fact that the world was so full of loot. I’m not complaining or course – I was happy to find ammo and food strewn all across the floor in each building and ruin. I mean let’s face it – the game takes place 200 years after the nuclear war. As far as I can tell no one is really producing anything and yet canned goods, bottled beverages and ammo is can be found literally at every step. Where does it all come from?

You are telling me that despite the fact that most people in the Capital Wasteland live of scavenging, the ruins are still full of edible food? I’d expect the people of the wasteland to live mostly on iguana meet, fried squirrels, dogs, rad roaches and occasional brahmin meat. But hardly anyone eats these things. Instead every household has at least couple of unopened cans of Spam, Pork & Beans and bunch of Nuka Cola bottles – despite the fact these items were out of production for two hundred years. It’s baffling, really.

Similarly, the car wrecks that litter the streets still explode when you shoot them. How the hell do they still have gas in their tanks after 200 years? I’d think that someone would siphon it out shortly after the war – and if they didn’t it would simply evaporate over time.

For comparison, try reading The Road by Cormac McCarthy. It describes a similar post apocalyptic setting – a burnt out, desolate wasteland. His story takes place only few years after the (nuclear?) apocalypse but finding supplies is already a problem. When his characters find a new town they realize that every abandoned building been meticulously searched by hundreds of people before them. The best they can hope for are scraps that others passed by or missed. In fact, the food shortage is so severe many communities turn to cannibalism. In Fallout 3 food and ammo is so plentiful that no one even bothers farming, and only few people keep livestock (if you can call a single brahmin tied to a stick a livestock that is).

This doesn’t detract from the game play of course. It was just a minor thing that kept bothering me initially. I learned to tune it out though.

I think I only have one more post in this series. I still have to complain a little bit about the writing, the karma system and give you my conclusion. All of that should fit in a single post – so those of you sick and tired hearing about fallout can rejoice.