I just inherited a Logitech VX Revolution mouse – one of those high end mice that I could not bring myself to buy. And by inherited I mean someone who was leaving dropped off their company laptop with all the peripherals and I was lucky enough to call dibs on the mouse. Now I have it sitting on my desk, replacing a much less expensive wired Logitech mouse. It seems barely used, and the wirelessness is a really nice feature for my cluttered desk. I no longer have that mouse cord getting in the way. :) 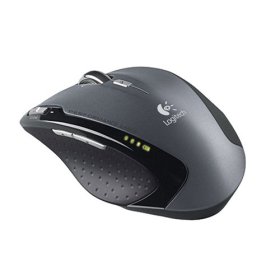 The mouse is nice, but not all that special. It seems a bit more accurate, and it is comfortable but I’m not entirely sure if I would buy one. It’s a notebook mouse so it’s slightly smaller than my old mouse, but I guess thats not a bad thing, considering that my new humongous keyboard takes like half my desk. The middle mouse button is a bit stiff and takes considerably more force to push down than on most regular mice. The zoom bar is located in a really weird, out of the way place that kinda makes it a bit useless. Still, it’s a very nice mouse so I’m not going to complain. I just need to remember to switch it off when I leave for home to conserve the battery.

Now the task at hand was to get the damn thing working under Dapper. By default my Kubuntu completely ignored the zoom bar, site tilts of the scroll-wheel and the little button above it. The side buttons were detected as right and middle mouse buttons. So the mouse was functional, but not fully.

I found this lovely thread on Ubuntu forums with a solution. There is an app out there called btnx designed with the Logitech Revolution and MX high end mice in mind. It let’s you configure all the nifty additional buttons. The newest version has a very nice GTK GUI that let’s you detect and configure all the buttons using an easy to use wizard. Unfortunately I couldn’t use that version because it requires GTK 2.10.x and I’m on Dapper. The most recent version in the dapper repos is 2.8.x. I didn’t feel like compiling GTK from source just to get a damn configuration wizard working.

Since the VX Revolution is one of the mice fully supported by btnx out of the box, I opted to install the old 0.2.14 version with a text based config and no GUI. The process was very simple:

At this point I got a weird error message. Here is the output of the last command:

People in the Ubuntu forums say this is a non-issue. So I went into /etc/init.d/btnx and commented the line that refers to vars.sh (line 34 I think). Then I did:

This restarted the daemon and plopped btnx_config file in my /etc/btnx. This is where all the keys are configured. The side buttons are mapped to key combo that changes tabs in most applications. It works in Firefox as well as Komodo Edit so I’m relatively happy with it. The little button above the scroll wheel refreshes the page in FF which is also a nice touch. I think I’ll keep that. The zoom bar was configured to do Ctrl+Alt+Left and Ctrl+Alt+Right which switches virtual desktops in Gnome. I reconfigured it to Ctrl+Tab and Ctrl+Shift+Tab for equivalent action in KDE but the key repeats very fast making it a bit difficult to control. To switch desktops one at a time you kinda have to quickly tug at the button instead of holding it. I may change this to something else.

Finally tilting scroll wheel invokes back and forward browser commands by default. I don’t particularly like this option because it seems like it can cause trouble. I can see myself tilting by accident and backing out of a half, written blog post. So I will probably change that also. Then again this haven’t happened yet so go figure.

I might actually swap the functionality between the side buttons and scroll wheel tilting. Use scroll wheel to control tabs, and side buttons to go back and forward. This way there is less risk of accidentally leaving the page while scrolling inside a text box.

My only issue is that one of the side buttons is still sometimes detected as RMB. It’s like a little lottery – I never know what it will do. There might be a way to override it. If I find it, I’ll post it here.