I was skimming through the PC Gamer today, and I saw a review for an interesting gaming device – the Novint Falcon. What is it? Well, let me paint you a picture: 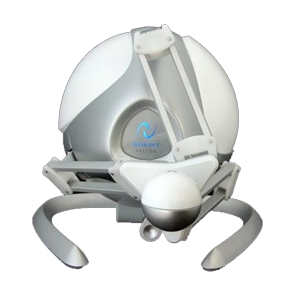 This incredibly, awkward, odd looking contraption is essentially a force feedback joystick which works in full 3d, encompassing the the X-Y plane traditionally used by mice (up-down, left, right) and the X-Z plane (ie, forward-back, left-right) usually configured with joysticks. How do you use it? It seemed a little bit confusing to me so I decided to look for some videos of it in action. Apparently you wiggle that little ball in the air, moving it left, right, up, down and also pushing and pulling it away or towards you. Check out Veronica Belmont playing around with it:

I have two observations about watching this. One is that Veronica is kinda hot, but that’s besides the point. Second is that the Falcon looks incredibly uncomfortable. I’m sure that the tactile feedback is interesting but I can’t imagine using this device for an extended period of time. For one, there is no support for your hand. Most joysticks have solid base letting you rest your hand on it, and mice are used on a flat surface where your hand is naturally supported. The falcon on the other hand has you holding the controller in mid air. Carpal tunnel in the making if you ask me.

The buttons seem to be in very awkward position, and the whole device looks both overly bulky and at the same time somewhat fragile and delicate.

Don’t get me wrong, I have nothing against the innovative new experiments with the I/O hardware. If you can bring us a brand new method for interacting with our games, more power to you. For example, Wiimote was a slam dunk! Excellent idea, great execution and support. People who don’t even play games are loving it.

The Falcon seems like a great concept at first – I love the idea of unifying the X-Y and X-Z controls, and taking the force feedback to the next level. But the execution seems to be less than promising. Look at poor Veronica – despite of what she is saying, she looks extremely uncomfortable using that thing. Besides, even if the construction was different, and the control was more comfortable and intuitive, I think it would still fail. Why?

Well, let’s look at the facts. The device costs $239, and virtually no games support it. The website features Half-Life 2 and Quake 4 mods adopted to work with Falcon, but I doubt any big (or small) game dev studio would even consider building in support for it, because only few potential customers would need it. It’s like a self defeating loop – no one will buy it, because there are no games for it. No one will make games for it because no one is buying it. Unless you are a gaming giant (like Nintendo) there is only one way to get out of this loop – make the device so cheap that people will buy even if there is only few games that support it, and no prospects for growth in that area. If many people buy it just for shits and giggles you may reach a critical mass at which point game developers will notice your device and start utilizing it. But if it’s more expensive than a high end mouse, you have a problem.

Also, you are really better off making an exclusive deal with one of the big console makers. You have the innovative controller, they have the captive market. If they support your controller, you have it made. If they don’t, the console segment of the gaming market is still big on expensive gaming peripherals. Majority of PC on the other hand gamers are perfectly content with mouse+keyboard combo, and never even considered purchasing additional input device for the purpose of gaming.

This entry was posted in video games and tagged gadgets. Bookmark the permalink.