I have this strange fascination with post apocalyptic stories. I love zombie movies, and MadMax like pictures despite their obvious cheesiness. I loved Margaret Atwood’s Oryx and Crake, and I’m glad that I picked up I am Legend after watching that unfortunate Will Smith movie which btw had nothing in common with the book, with exception of the title and the name of the lead character. So when I have seen the blurb for Cormac McCarthy’s The Road and looked through it’s glowing reviews I was sold immediately. 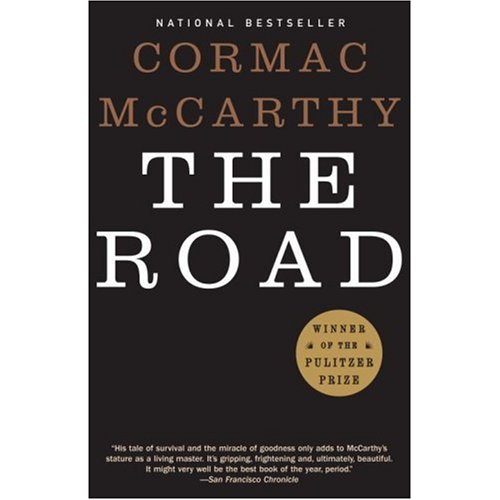 The book paints a vivid and yet disturbing picture of a world in which civilization has collapsed. Some unnamed, and unreferenced cataclysm has scorched the earth and changed the world forever. The novel starts many years after the catastrophe but the planet still haven’t recovered. The conditions are essentially those of a nuclear winter – the sky is shrouded, sun is never clearly visible, and the temperatures rarely climb above the freezing point. When it’s not snowing, it’s raining. When it’s not raining, the wind is blowing around fine grained gray ash, that makes breathing difficult. All the life is gone – there are no birds in the sky, no fish in the rivers and all the vegetation either withered away due to the perpetual twilight, or got scorched away by raging firestorms years ago.

Cities are populated by hollow, plundered, rusting, roting or burned buildings. Every store, and house has been looted years ago and everything is in the state of decay. A man and his son are traveling through this empty, sad and desolate world trying to reach the sea. They are always on the verge of starvation, as finding food is becoming more difficult every day. What is worse, they are not the only survivors. There are other people out on the roads, and they are also starving and are ready to do anything to survive. Anyone they meet is a potential threat – as the last human remaining communities seem to sustain themselves either by warfare and banditry or through cannibalism.

Unlike most of stories that deal with post apocalyptic scenarios, The Road is not some moralizing cautionary tale. We never find out what destroyed the world. It could have been a nuclear war, but it could have also been a force of nature – for example an asteroid impact akin to the one that wiped the dinosaurs in the past. No one knows, no one cares. This is not what the story is about – the story is about the human condition. It is a moving tale about survival, love, fatherhood and growing up in a world that has gone mad. It it is about desperately preserving the very essence of humanity against all the odds.

It touches upon many interesting topics – for example strange form of generation gap that exists only in this new reality. The father still remembers the world as it was before the catastrophe, but his young son has never experienced it. He only knows it from his fathers stories, and he suspects that he made up or embellished half of it. Contrasted with the bleak and harsh reality he knows, the fairytale sunny, overpopulated world full of teeming wildlife, and technology seems as alien to him, as the reality described in the book is alien to us. As the two travel together they see starkly different worlds.

Furthermore, how do you instill morality, goodness and kindness in a child in a world in which these values are only faint memories of a temperamental old man. Especially if this man can be as savage and brutal as the bandits and cannibals, when he is forced to defend his child.

There are no names in this novel – nameless characters move through nameless places. McCarthy stripped all the unnecessary geographical details from his narrative. The world is dead, the cities stand vacant, the rivers are empty – who cares what they are called. It wouldn’t make a difference – not to the characters at least. He concentrates on things which are important to them – like the weather conditions, the food they eat, or are able to find, the overpowering sense of danger, the omnipresent decay or the evidence of unbelievable depravities committed by the other survivors.

It’s thought provoking, moving and disturbing – and in a sense beautiful. The only thing that I didn’t like about it was the ending – the very last page or two [spoiler]where the boy is taken in by the strange man he meets on the road and his familly[/spoiler]. It just seemed anticlimactic. After all the stuff they went through [spoiler]he just finds a “normal” family, and lives happily ever after[/spoiler]? I don’t know, to me it just didn’t gel with the rest of the book. Perhaps I was really expecting either a very morbid, or very ambiguous ending – for example [spoiler]the boy taking the road alone this time, walking off into the gray ashen wasteland – this marking his passage into adulthood[/spoiler]. But alas, this is what we get. And since this conceptual glitch doesn’t show up until the very last 2 pages of the novel, I really think it’s not that bad.

If you haven’t read it, and you like this sort of post apocalyptic stories, definitely pick it up. But here is a word of warning – despite the premise, there is actually not that much action or suspense in this book. Or rather the suspense builds very gradually over many pages, and it is subtle. If you are looking for an action packed page turner, you will probably be disappointed.

Banking on the success of the adaptation of McCarthy’s other novel “No Country for Old Men” Hollywood already decided to create a movie based on “The Road” supposedly with Viggo Mortensen in the lead role. I’m not really sure if Stareagorn could really pull this off.

I can’t wait to see how they fuck this one up. I wouldn’t be surprised if they decided to animate some of the cannibals and make them all monstrous and mutated, or made the father an ex navy seal and have him carry an M4 instead of the pistol. :P Most likely the movie will totally suck – but then again, we’ll see.


6 Responses to The Road