I grew up on comic books. However, since I was growing up in post communist Poland my first comic book fascinations were stuff like Capitan Kloss, Funky Koval, and Thorgal. Especially the last two titles were bit more serious titles, with stories and themes that were not really aimed at kids. But I loved them anyway, even if I didn’t understand half of what was going on. They were also complete stories that closed in 20 or so books, so I could re-read them every few years and as I was growing up I was able to appreciate them in different ways. For example I read the Chninkel trilogy around 15 times and I didn’t fully appreciate the depth, the irony and the theological allegory until I was in college.

I got introduced to Marvel and DC universes later than most American kids. I grew up on difficult, gritty stories filled with pointless violence, philosophical turmoil, senseless rape, murder and characters forced to make difficult choices and face moral dilemmas that were troubling and thought provoking. When American comic books hit the Polish market I started buying them because as everyone I was fascinated with this brand new world of super heroes. They lived in a whole different universe – in this bizarre fairy tale land where truth and justice always prevailed. Some stories were good, some were campy – but the characters were what drew us in. They were make out of pure awesome – they were powerful, and exotic with their silly wester idealism, and their strange problems. Furthermore they were cultural icons, and symbols recognized everywhere. So I was hooked for better or for worse.

The interesting thing about this new world of super powered beings was that they were all connected. There were crossovers, guest appearances and etc. Marvel universe was a whole ecosystem filled with all these strange characters and stories in one book could affect lives of other characters with their own independent series. So while on the surface, the world of superheroes looked simple, and glossy – it was actually incredibly complex and required full immersion to fully grok it in it’s totality.

It’s actually quite intriguing to observe how these ecosystems work, and endlessly recycle and re-invent the same characters to adopt them to new stories and make them relevant to the present times. There are some really good stories, and some really crappy ones out there but at some point I got tired of the weekly mill of stories. I think what eventually killed my interest was the and constant flux of writers, and artists – shifts in quality, frequent retcons and changes in theme and direction – and of probably a lack of closure. I currently don’t follow any of the mainstream Marvel or DC series, but I do remember them fondly. But once I groked them, it was time to move on. I like good stories – which have a beginning, and end and artistic or literary vision and concept behind them.

Wrote this very long introduction to give you some context because recently I got my hands on a stack of Sandman comic books. It is the complete collection I believe – the series closes in 75 issues. I have read around 30 issues and so far I’m enjoying the hell out of it. 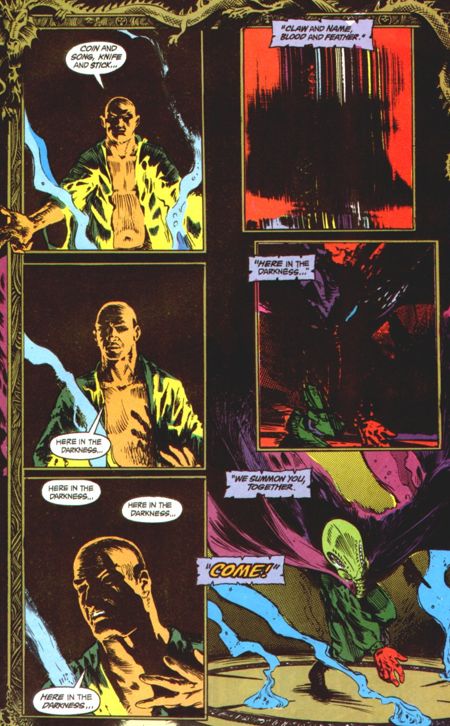 I have heard about Sandman before (always mentioned with this soft of reverence reserved only for classics of the highest caliber) but I have always thought it was a self contained series that lies outside the DC continuity. Surprisingly, it is not – I guess this just shows how much I was paying attention to this universe. Neil Gaiman firmly anchored his masterpiece it within the DC universe but was by no means contained by it.

The main character is Morpheus – the personification of dreams. Not really a god but one of “endless” who represent primeval forces such as death, dreaming, destiny or desire. They are said to be older than gods, and the only true immortal beings (as gods may die or become forgotten but the endless remain). He rules over people’s dreams, nightmares and is also patron of storytelling. As you could imagine, a character like that is very detached from reality as we know it. He exists on a different plane of existence and visits realms that are closed to mere mortals. And yet, when he manifests himself in our reality he connects with the mainstream DC universe in subtle and yet noticeable way. He meets John Constantine, interacts with members of the Justice League and battles with Dr. Destiny. Gaimain even retcons all the other DC Sandmans to be facets, or aspects of his essence or personality. 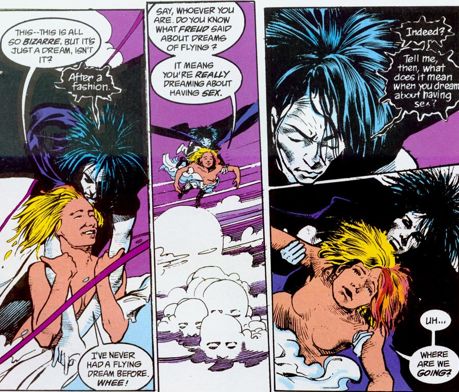 The issues are either self contained, or form story arcs which span several volumes. They all form a continuity, but you could theoretically read each “story” individually. And most of them are very good. They are weird, reflective, metaphorical and thought provoking. Let me give you some examples of the ones that really stuck in my memory.

There is a story there about a burned out writer, who captures a greek muse and keeps her in his house under a key. He uses her to crank out one bestseller after another and gain international fame and recognition. He also routinely rapes her justifying it by telling himself that “she is not even human, so it’s ok”. Interesting, twisted but good reading. 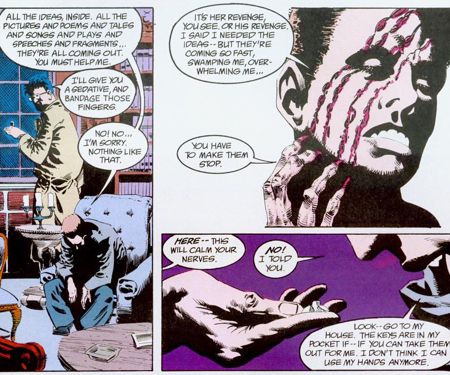 Another twisted story features a Cereal Convention – a convention for serial killers. Brutal, psychopathic murderers from all over the country all meet at a small hotel in the middle of nowhere to discuss their passion. They have discussion panels, cocktail hour, they dance, mingle and brag about their exploits. Only that there are some guests staying at the hotel who are not killers but travelers, who had to stop there for a night due to unforeseen circumstances. 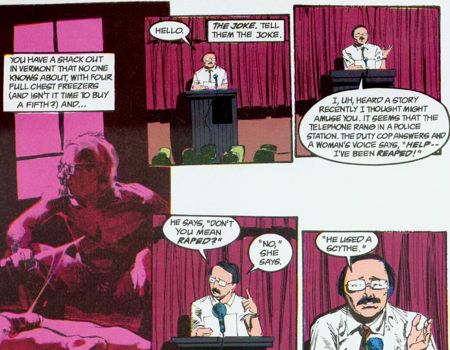 In issue 19, Morpheus contracts William Shakespeare to perform his play A Midsummer Night’s Dream he wrote under his inspiration in front of the real Auberon the kind of Fairies and his retinue. This book actually won the World Fantasy Award back in 1990. 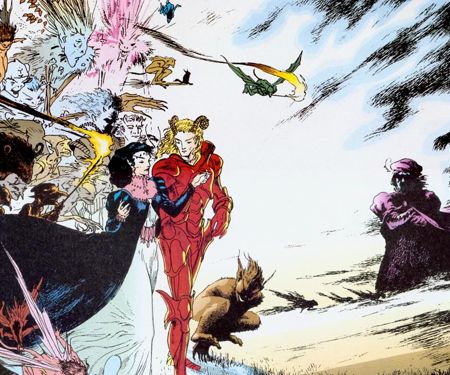 Or, for example consider the following: what would happen if Lucifer decided to close down hell, and release all the damned one day? What’s worse he gives you the key to the now vacant hell. Next thing you know, you have a crowd of different deities, and mystical beings at your front door, all trying to buy the key from you. Norse gods want to use hell to escape Ragnarok. Banished daemons want their domain back. Egyptian gods, Fairies and forces of Order and Chaos and angels from Heaven also throw in their bids. And all of them have very attractive and enticing offers. Who would you sell it to? 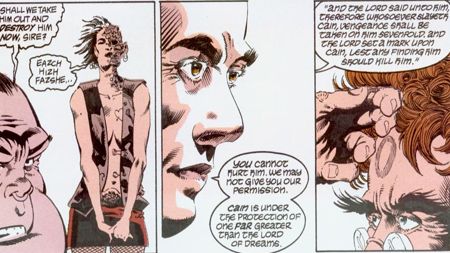 Gaiman really plays with conventions, themes and jumps back and forward in time. One story is told completely from a perspective of a house cat. Another happens in the middle of African desert where a boy goes through the rights of initiation practiced by his tribe. All of them are connected by the central figure of Morpheus who is not always the protagonist, but always a key character in a given tale. 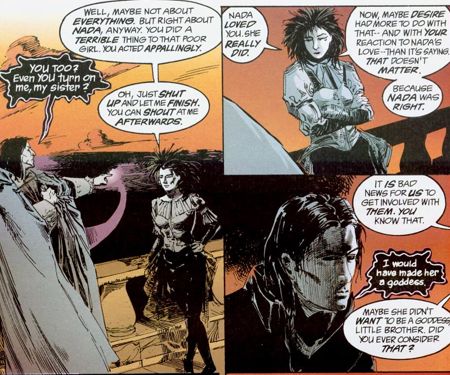 The artwork quality varies. The covers by Dave McKean are really striking. They are really not something you would expect to see on a comic book cover, but considering the stories they contain they fit quite well. The artwork inside varies as different artists tackled the task of illustrating the series. The style they all try to follow is similar though. They all stay away from photorealism, or typical DC/Marvel super-hero style. The art is gritty, dark and often intentionally sloppy. There is a lot of play with shadows, colors and some creative uses of inter-connected panels. If I had to sum it up in two or three words, I would say “oneiric surrealism” or something among those lines. But it changes depending on the topic. For example, issue 19 mentioned above, is kept in a much warmer, colorful and realistic style than most of the other books. 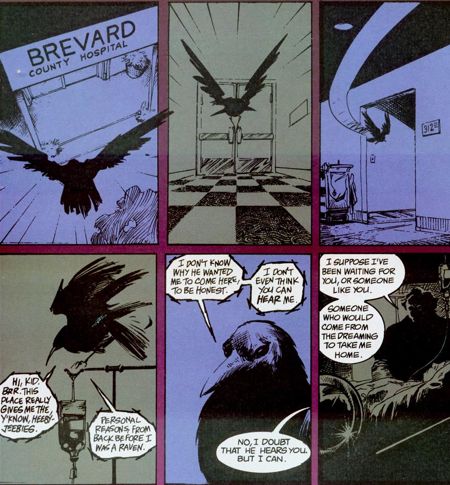 It will probably take me a while to work my way through the rest of this stack. If you like graphic novels, and you are looking for some solid storytelling, smart and thought provoking and often controversial, and difficult plot lines you should definitely give Sandman a try. Even if you don’t like comic books, you should at least give it a cursory read. I highly recommend it.

This entry was posted in comics and tagged neil gaiman, review. Bookmark the permalink.


One Response to Sandman: First Impression