The Familly Life of Orcs

Recently I realized that traditionally evil races such as Orcs, Goblins, Kobolds and etc. in RPG games rarely have fleshed out social backgrounds, or detailed descriptions of daily lives. It’s as if every member of each respective evil race was a male warrior, whose only desire in life is to wander around in the wilderness hoping to bump into a party of adventurers he could fight. The have no other ambitions, goals, dreams – they do not form families, they do not raise children, hunt or grow crops. All they ever do is raiding human villages, looting, pillaging and raping innocent women (I mean, that’s where you get all these Half-Orcs, no?).

I touched upon this subject before when I talked about my experiences playing Horde character in World of Warcraft. As I said in that post, both Horde and the Alliance are good guys in this game. They are enemies because of their history, and their beliefs. Orcs are not some feral beasts in this game – just tribal people with a war-like culture. As you run around Kalimdor however you will see that war is not all they are about. In several places you can see Orcish kids running around and playing. Somewhere there is a house and inside there is an Orc woman preparing a meal for her husband and son. There is a dude in Crossroads who hires adventurers to search for his lost wife. You quickly get the picture that these green skinned creatures are not some bloodthirsty monsters – they form families, they love, they hate, they play with their kids and etc.

In that aspect WoW portrays Orcs in much more detail and in much kinder light than most RPG’s out there, including the pen and paper ones. Apparently I’m not the only person who noticed this. Go check out David’s post Orcs are not just Orcs at the Verbing Noun blog. He makes some excellent suggestions for fleshing out the traditional antagonist races in your RPG campaigns, and how to subtly subvert your traditional “go kill all the Orcs in the Orc camp” quest into something entirely different. Instead of a simple hack and slash, your company is faced with a moral conundrum.

The PC’s know that if they do nothing Orcs will continue raiding nearby villages. But can a good aligned company justify a preemptive raid on an Orc camp/village full of women, children and elderly non-combatants? How will a lawful good paladin feel about looting Orc war-chief’s body for that +2 Awesome Mace of Awesomeness if his an Orc woman is crying and pleading to take her husbands body and give him a proper burial? 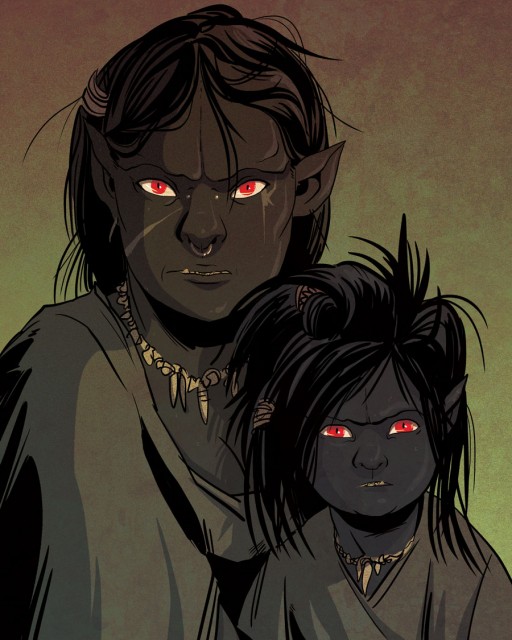 Perhaps if the players stopped, and looked at how the Orcs live they would realize they are not just some barbaric, evil monsters. They are a race with it’s own culture, traditions, oral history, and a deeply rooted morality system which may seem alien to us because it is based on a different alignment.

It is a deliciously insidious idea – to start with a very traditional setup, and then flip it around and make the PC’s realize that perhaps they can’t become heroes without becoming monsters. They can feel the same way Robert Neville felt in Mathesons’ I am Legend (the short story not the movie). Humans will hail them as heroes, and saviors but amongst Orcs and their allies they will be despised and known known as ruthless butchers – a living proof of human cruelty and destructive drive that is causing the conflict between the two races.

In fact, if you think about it this seemingly random, one-off encounter may be spun into a lengthy campaign in which the PC’s must deal with the fallout and repercussions of their reckless raid. For example their legendary cruelty was a catalyst that helps to unite local tribes under one banner and an all out war is about to break out? How can they prevent it? Will they negotiate? Will they try to assassinate the leaders and instigators driving the Orc war machine? Will they be willing to give themselves up and accept punishment for their deeds in the name of peace? It could be interesting stuff. 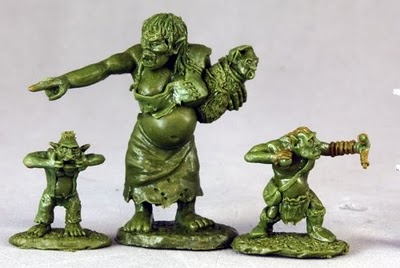 There even exist miniatures you can use to represent Orc non-combatants in your games.

Thanks to WoW and David’s article I will never look at evil humanoids such as Orcs, Goblins, Kobolds and the like the same way again. I will now always wonder what are their reasons for doing what they do. What are their daily lives like. How are their families structured. What values are important to them. And how can I make the PC’s feel like shit for killing them. ;)

Of course there is the opposite approach. If you don’t want to deal with these moral quandaries, you can simply say that Orcs, Goblins and the like are inhuman, supernatural beasts who do not reproduce, do not form families and exists solely to participate in random encounters.

This entry was posted in rpg and tabletop and tagged reinventing fantasy races, wow. Bookmark the permalink.


11 Responses to The Familly Life of Orcs