A while ago we talked about surviving a zombie outbreak. While zombie events are not only very rare but also completely fictional, it does not hurt to have a plan just in case they happen. As it turned out, quire a few people gave this some thought and were able to discuss different strategies. Today I wanted to talk about one of these other rare, unlikely and fictional events: a repetitive time loop just like the one seen in the movie Groundhog Day. 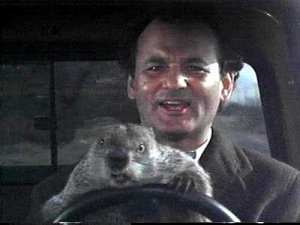 If you haven’t seen this movie, do yourself a favor and go watch it now. Or this weekend with your loved one, your kids or your family. Then come back and join the discussion. Let’s establish some sort of a framework we are working with. First, we do not know why time loops happen. Second, we know that each loop has an exit condition of some sort. The loop in the movie terminated when Bill Murray’s character stopped being a self centered ass and actually started caring about the people around him. Your exit condition may be different though.

It is probably safe to assume that a time loop, being a very subjective experience may be tied to some personality flaw or personal condition of yours. Maybe you need to become a nicer person. Maybe your loop terminates when you finally overcome that paralyzing fear of heights. Perhaps your loop is tied to your fear of commitment. Whatever it is, you can probably assume it has something to do with self improvement or personal growth of some sort. It is not something you can accidentally stumble upon, or fake. Unfortunately it is impossible to tell exactly what will trigger loop termination while inside of it. The general census is that any attempts to better yourself is probably taking you closer to the end condition. What will trigger it however, must be found through experimentation. Good news is that you have all the time in the world to figure it out.

We also know few other things about these loops. First and foremost, you are virtually immortal. You cannot terminate the loop by suicide, or accidental death. Dying will simply end the current loop iteration, and immediately start the next one.

An average loop iteration usually starts with you waking up in the morning. The duration of the iteration will usually be 24 hours, but it may be less. If you decide to stay up for that whole time, you will still wake up once the iteration ends. You will still start the iteration in your bed (or wherever you were when the loop started) no matter where in the world you are when the iteration ends. It is unclear whether or not you will feel the physical fatigue in the morning. It is possible that you will wake up feeling the same way you felt when the loop started. So if you had a good nights sleep, you will feel rested. If you only caught few hours of sleep, you will feel tired. I’m basing this observation on the fact that even if your physical body is somehow destroyed (burned, crushed, mutilated) you still start each loop iteration intact. So I’m guessing that your body is restored to the exact quantum state it was in when the loop has started, with the exception of your memories which are carried over somehow.

Keeping track of time within a loop can be tricky. You can’t use a calendar or notches on the wall to track the passage of days. You could try remembering which day it is but it could easily get confusing. Especially after you got into 3 digit numbers. So you need something more permanent. In the original Groundhog Day script the main character kept track of time by reading a page in a book each day which seems like a good idea, unless you are an avid reader and you would like to read more than that. Still, you could set your limit to be 20 or 30 pages a day, or whatever you are comfortable with and keep track this way. Of course if you are reading books out of order (ie. the interesting ones, rather than systematically working your way from A to Z) it could get confusing too. Anyone has an idea for a good time tracking solution which would work within a loop with some degree of accuracy?

How far can you travel? This question always comes up in the Groundhog Day discussions and I’m not sure if I know the answer. In the movie Bill Murray’s character is trapped in the town by a snow blizzard and road closings. This seems to be by design, since the friendly small town atmosphere is conducive to accomplishing his self improvement goal. I’m not sure if this would be a defining characteristic of every loop. My guess is that if your location is somehow significant to the end condition you may not be able to travel far. Which is not necessarily a bad thing since it narrows down the number of variables you need to work with and gives you a hint as to how to terminate the loop. If you cannot leave, then you know you have to work with what you have around you.

However, some loops may not be localized. In such case you could theoretically jump on a plane and get to many interesting places in the world with few hours to spare for sight seeing, or sampling the local cuisine. Of course if you commit yourself to spending 6 hours on a plane to spend few hours in Europe you are not really working on your self improvement goal. Which brings me to the fun part: diversions.

As we established, arriving at the end condition will be long and arduous process. It may take you years, or even centuries to accomplish. In the meantime, you are immortal and your actions have no permanent consequences while you are looping. Every morning you start with a clean slate. This means you are free to do anything you want. Needless to say, before you start working on self improvement, you will probably do all kinds of stupid shit that you would never do in other circumstances. For example, you can max out all your credit cards on stupid shit, quit your job, jump out of a plane without a parachute and etc. Depending on your personality you may really take advantage of this freedom, and go wild. But we probably don’t want to talk about fulfilling your primal urges or some dark desires here. This stuff will get old real fast anyway.

There will be a long stretch of time between the time you get fed up with doing crazy stuff for cheap thrills, and the time you get out of the loop. Months, maybe years if not longer. You will have to find some constructive hobbies to keep yourself occupied. Otherwise you might go crazy before you get out. So what long term projects or activities would you use as diversions. The main character of the Groundhog Day used this time to learn to play a piano, and read a lot of poetry and classics. Given virtually infinite amount of time, what would you do?

I’d definitely do some reading. There is a small public library in a walking distance from my house, and a huge, well stocked Barnes & Noble store so I don’t think obtaining books would be a problem. The only inconvenient part is the need to fetch the book back each day day as it will disappear from your house every morning.

I’m not sure about playing an instrument. My musical sense is not that keen and I never had a particular desire to play/create music. Also I don’t own any instruments, and don’t know any good teachers. There is a Guitar Store shop nearby though so I could probably learn that at some point but I’d probably put it on the very bottom of my list.

I’d love to learn a new language – preferably Japanese. And no, it’s not just so that I could watch Anime without subtitles or play imported games but it would be a factor. I’m already bilingual, and speak and write fluently in both English and Polish. I also studied German and Russian but I forgot almost everything about these two languages. The thing is, the Asian languages are so structurally different that it would probably be an interesting and mid opening experience.

I’d try to learn new programming languages and improve my coding skills and generally broaden my knowledge. Since I might be stuck in that loop for centuries I wouldn’t want to get rusty. The problem is that I would not be able to retain any of my work between loop iterations so working on large, time consuming projects would probably be out of question. I’d probably stick to small, solvable problem sets or exercises that could be completed within few hours. I’d probably blow through the whole Project Euler problem set multiple times, with different languages and using different approaches and paradigms. Maybe I could even get a jump start on my PHD. I wouldn’t be able to attend lectures or write a thesis of course but I could possibly learn about the curiculum, the required readings and start going over the required readings and I could probably find professors willing to answer some of my questions and coach me through the difficult parts. It would be a one time favor, every time.

Playing video games would be a problem because I wouldn’t be able to save. I’m usually not the kind of person who plays the game through multiple times. I play it once usually, unless the game offers very rich repeatable experience. So I’d probably try to speed run the games. I’d get them first thing in the morning and then play them till I beat them, or run out of time. Depending on the length of the game this would be like an all day affair so I wouldn’t do that every day. Just some.

What would you do? Let me know in the comments!

This entry was posted in futuristic musings and tagged musings. Bookmark the permalink.