Life is Strange: Save Scumming as a Game Mechanic

“Save scumming” has been a video game concept ever since we have invented save states. In the past, abusing the save system was often the only way to win or avoid losing progress. For example, Sierra adventure games liked to kill the player at random for no reason, so you had to save often (preferably before entering a new area or touching anything). Modern games tend to discourage this tactic limiting where and how often you can save, or replacing save game systems with automatic checkpoints. 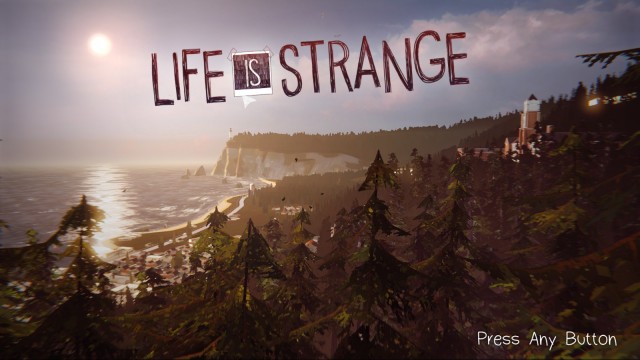 Back in 2007 I asked my readers what save mechanic they prefered and the overwhelming number of respondents chose classic “save anywhere” system conducive to save scumming. I bet that if I asked the same question now, I would have seen the same answers. But if you look at the new releases, you will notice that more and more games tend toward a checkpoint based systems. This could be partly explained by ubiquity of consoles and difficulties of managing save game files across a myriad of platforms. But my pet theory is that “save anywhere” systems are simply one of those things that players love, and game devs hate for the same reason: empowerment.

A flexible save system can be game breaking, allowing a determined player to break up challenging segments into tiny, discrete chunks that can be mastered in isolation, or to abuse the random events to always get favorable results. As such it reduces the challenge and gives players meta-gaming tool they can use to brute-force challenges instead of grinding or getting better at a game. Naturally, this is something that many developers would like to avoid – they want to keep their game challenging and make sure no one gets to “cheat”. Hence, we see the shift toward smart, and flexible checkpoint systems in many modern titles. 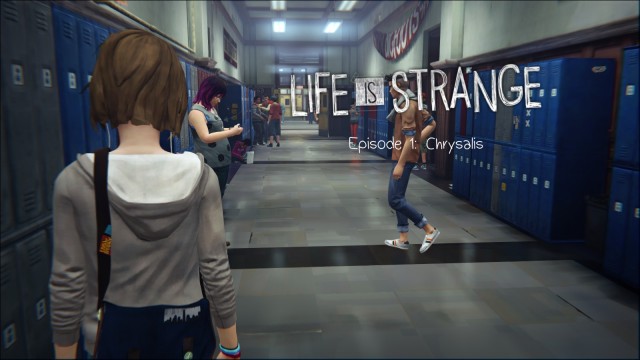 Personally, I think that trying to force people to play your game the hard way is silly. If a game is too challenging, or too punishing and it forces me to re-play the same segment over and over again until I get good at it, I usually get discouraged and stop playing. Save scumming lets me force my way through the bits of the game I would otherwise find tiresome and let me enjoy it at my pace. I always appreciate it when a dev team decides to trust me enough to give me a potentially game breaking tool, and let me use my own judgment as to how to use it.

The Life is Strange by Square Enix is a checkpoint based game, which introduces an interesting “time rewind” mechanic that for all intents and purposes emulates save scumming. At any point in the game you have an option to hit a button, and go back to an earlier state, allowing you to undo mistakes and change important decisions.

In and of itself, this mechanic is not new. The most prominent title that has used a similar gimmick was the 2003 game Prince of Persia: Sands of Time. But there it has been employed a bit differently. The rewinds in the game were very limited (allowing you to go back only 30 seconds or so) and were tied to a finite, collectible in game resource. They were intended to be an “undo” button you hit after botching a dangerous jump, or accidentally falling off a platform. Life is Strange uses the mechanic in a way I have not seen before. It is not an undo button, as much as it is a “Groundhog Day” button. 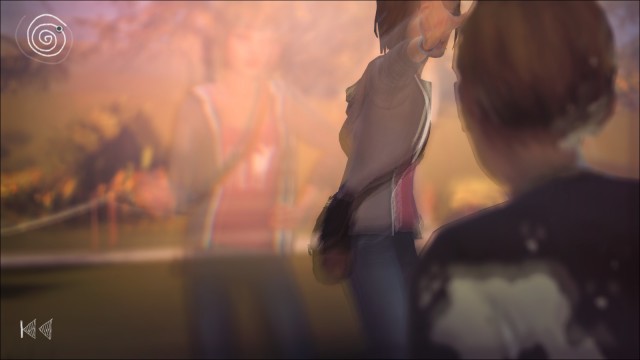 Let me explain that. In the 1993 movie Groundhog Day, Bill Murray is trapped in some sort of a temporal time loop forcing him to relieve the same day over and over again. As a result, nothing he says or does during the day has any lasting consequences, since the timeline resets itself every night. This lets him get into all kinds of funny shenanigans, but ultimately gives him an opportunity to learn to become a better person through trial an error. Eventually he sets out on a mission to use what he knows about the events that will unfold during the day, and the things he learned about people around him to live out a perfect day.

Life is Strange allows you to do exactly that, albeit at a smaller scale. Max, the protagonist can only rewind few minutes into the past without getting nose bleeds, but this still allows her to do Groundhog Day style tricks. For example, she can have a conversation with someone, learn something significant then rewind back, and use the fact she just heard as a leverage. Or she can pick up a friends’ book-bag from the floor and rummage through it without permission only to rewind time right afterwards. The game also preserves your inventory between rewinds – so anything you pick up or put in your pockets travels back in time with you. 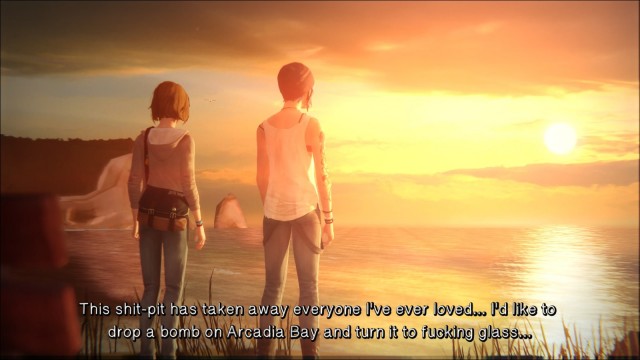 If you think about it, this is exactly what players do when they save scum. You run through a conversation to see how the characters react to what you say, and then you reload to ace the conversation and get the most favorable result. The rewind mechanic simply lets you skip the tedious bits involving management of save game files. Not only that, it keeps you engaged and immersed in the game world because you are no longer meta-gaming. It is absolutely brilliant.

So is that game world they keep you immersed in for that matter. My one and only complaint about this game is that it is just too short. Life is Strange borrows both the core game-play and the episodic format from the critically acclaimed Taletale Games The Walking Dead series. According to my Steam stats, the first episode subtitled “Crhysalis” took me a little under five hours to finish. And this is with me walking around, examining everything and just taking in the sights. After I finished it, I immediately wanted to go back to Blackwell Academy. Not even to find out what happens next (although I must say that the mystery behind your super powers and the impending cataclysm looming over the town are sure intriguing) but to spend more time with Max and Chloe. 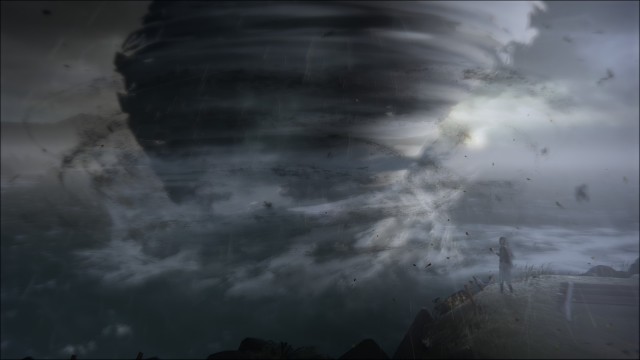 Super Tornado. This is not a spoiler since you see it in the intro sequence.

Chloe, by the way, is voiced by the amazing Ashly Burch of the HAWP fame and she does a spectacular job. In fact most actors are on point, the conversations flow well and are engaging. Blackwell Academy feels like a real place, inhabited by real people rather than just a set of puzzle chambers, conversation rooms and inter-connecting corridors.

The game is a breath of fresh air. I love the fact that you get to play as a teenage girl, facing teenage girl problems (like asshole school principals, rich “mean girls”, nice guys and etc..) in addition to having super powers, trying to find a missing girl, preventing a murder and stopping a super-tornado from destroying your home town. I was overjoyed to play a character who actually has a concrete past (rather than the standard, vague “special forces/marines” background), relationships and insecurities. 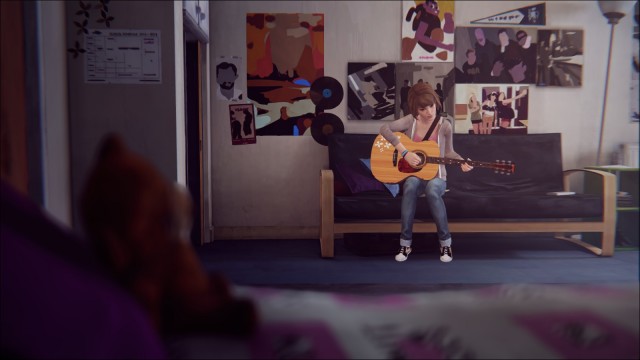 Max hanging out in her room, playing a guitar.

Spending 5 hours wandering around Blackwell Academy as Max Caufield was a rather intriguing and eye opening experience. Somehow I have managed to go through 30-odd years of my life without ever wondering how high school experience might have looked from the other side of the gender divide. None of the media I have consumed up until this point have actually given me a clear glimpse of it. Life is Strange did. Perhaps it is because video games put you much closer to the protagonist than any other medium. Perhaps it’s because Max is such a wonderfully fleshed out character who is easy to identify and empathize with. All I know is that viewing the world through her eyes was intriguing and enriching.

Especially that part where I more or less met myself. You see, Warren is basically a snapshot of me, as I existed back when I was around that age. He is somewhat awkward but personable, smart but introverted, super into science, computers and anime and related things. He has zeroed in on the shy, lonely new girl in town, and he set his phasers to “maximum cling”. He is dead set on giving Max so much of his time, attention and support that she simply won’t have any choice but to eventually fall in love with him. It’s not that he is creepy, weird, overly forward or insincere. He seems like a really good kid. He is just, uh… That guy. And now I totally get who “that guy” is. This was perhaps the first time I saw this “boy with an unrequited crush” dynamic without identifying with the guy. Seeing his behavior reflected back onto me, and being able to react to it was definitely eye opening.

Isn’t this what art is all about? Taking you to places where you haven’t been before, and making you feel things you haven’t felt yet? 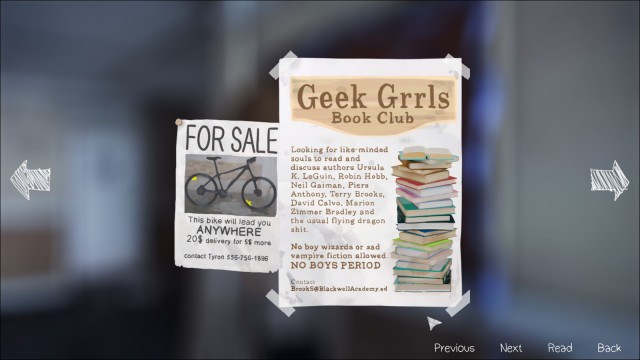 The game, despite short run time is full of little moments like this. I love the complicated, stranded relationship between Max and Chloe. I like that by the end of the episode Chloe’s “step douche” becomes literally your high school arch-enemy. I love that the game lets you dump a bucket of paint on a cashmere sweater of the mean popular girl to shut her up, but then allows you to be nice and comforting to her afterwards. Life is Strange takes a rather nuanced approach to systematizing “moral choice” and gives you more options than the standard Bioware options of “kick the sick puppy” or “send the sick puppy to college”. Because you can always rewind conversations and undo most of your actions at will, the game tends to avoid clear cut “good vs evil” dilemmas, instead focusing on character driven choices or setting up future plot hooks. Whenever you make an important decision, it impacts either your relationship with one of the people at Blackwell Academy, or sets up a dangling plot thread that will doubtlessly come back to hunt you, or pay off big time in the future. 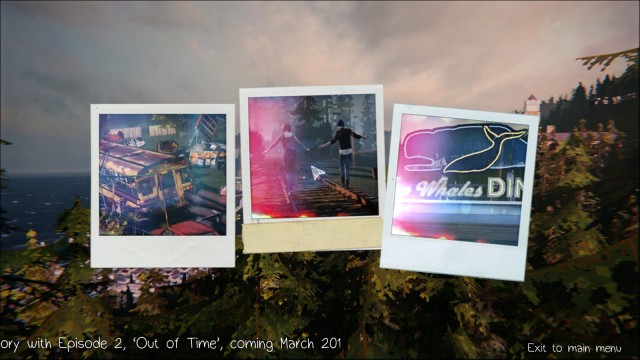 Next time on Life is Strange

This kind of game-play was shown to be extremely effective for The Walking Dead, but Life is Strange gives it a new, interesting twist. It remains to be seen how well the game handles the player choice, and branching of the story. So far the writing is incredibly strong, the characters are vibrant and the story is captivating. That said none of the choices you make in Episode 1 have any payoff or consequences as of yet. I hope hat the future episodes will be as good, or better than this one.


3 Responses to Life is Strange: Save Scumming as a Game Mechanic