There is a billion and one stupid gameplay videos on Youtube made by kids wanting to show off their 1337 pwning skills. Some of them are made by pointing camcorder at the monitor, but the majority are actual screen captures. I figured that if a 12 year old can make this sort of videos, then it can’t be difficult. So I decided to teach myself the art of making gameplay videos and will share that knowledge with you here.

First let’s talk about platform choice. If you want to make videos of game play, then you are a gamer. If you are a gamer, then probably own a PC with some version of Windows installed somewhere in your house, and that is your main gaming machine. That is the box you will be using for making the videos. I mean yeah, some people do play on Macs but they have a very limited library of games to pick from. Last time I checked, they can choose between World of Warcraft and… World of Warcraft.

If you are playing on Linux under Wine/Cedega then more power to you but that’s way to much hassle than it’s worth. I use my Linux box for serious stuff and my Windows box for gaming. So we will be using windows based tools here.

First thing you need is a screen capture software. I did a little bit of research on this, and the interwebs seem to think that FRAPS is the best tool for the job. Unfortunately it is a proprietary, and costs money. Now it is uncharacteristic for me to recommend non-free software but I downloaded a demo and it worked perfectly for me. It is small, unobtrusive, has almost no noticeable impact on your FPS or performance and worked perfectly for recording clips of Morrowind game play. The demo will only let you record 30 seconds of footage, but the full version has no restrictions.

It’s only $37, you get a lifetime license, free updates and there is no DRM involved. In my book, this is a sound investment. Of course if you are a gamer who scoffs at paying for software, then you probably won’t have to pay for the full version of this tool either. FRAPS is very popular, and thus you will very likely find illicit copies of it through the same channels as you find cracked copies of your games.

The interface is very intuitive and easy to use: 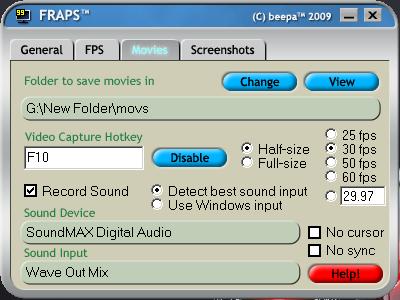 Note that if you are planning to capture Morrowind you will need to rebind the video capture key. By default it is set to F9, which by coincidence is “Load Quicksave” in Morrowind. I bound it to F10 and all was well.

You’ll probably want to capture video at half-size because this will reduce the size of the files FRAPS will generate. I recorded 3 minutes of Morrowind footage at full size and ended up with a 1GB avi file. If you are making vids that will end up being posted on Youtube you will have to re-encode these things into something more sensible anyway so capturing at half size shouldn’t really make a difference.

How do you use it? Launch FRAPS, minimize it, start your game and then hit the video capture hot-key (by default F9) when you are ready to start. Hit it again to stop capture. That’s it!

Now as I mentioned, FRAPS output files are HUGE with capital H and capital UGE. What you want to do next, is to load that shit into Windows Movie Maker which should be installed on your machine. If it’s not, you can download it. There are better tools for video editing out there, but you just spent $37 for you capture software so let’s cut our losses. Windows Movie Maker will probably be enough for now.

Open Movie Maker and drag the file generated by FRAPS onto it. On the bottom you should see a timeline where you can select frames and do stuff to them. On the sidebar, you will have options to add titles, captions and credits to your video. It’s all very straightforward and you should be able to figure it out in minutes. If not, there are millions of tutorials on the web that will teach you to use this thing. 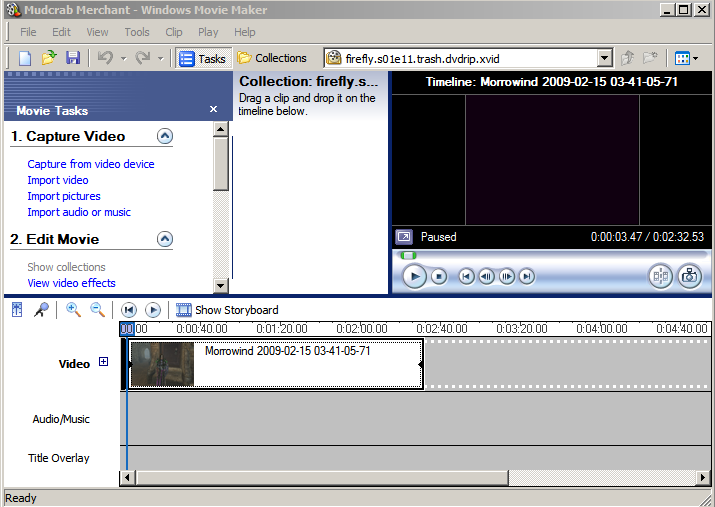 So add a title, credits and whatnot and then hit “Save to My Computer” on the sidebar. It will then ask you what format do you want to save it in: 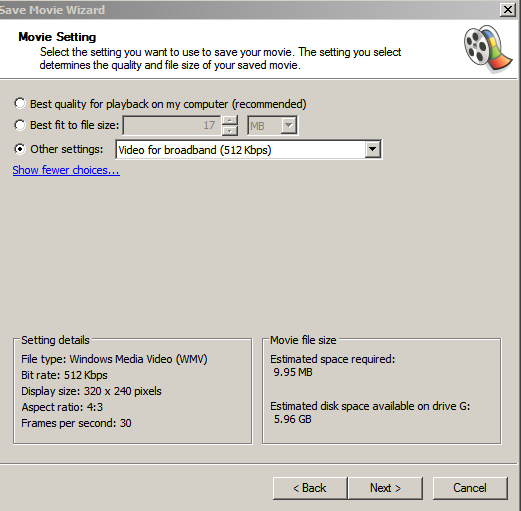 If you are planning to upload this video to Youtube or similar service then probably the best choice here is the “Video for Broadband (512 Kbps)”. Anything lower will yield crappy video quality. Anything higher will produce bigger file size which will then be converted to FLV and made look no better than the 512Kbps copy.

This took my 1GB video, and re-encoded it with much lower resolution into a 10MB avi file which was perfect for Youtube.

The end result can be seen here:

I’m pretty happy the way it turned out. I did get a weird stuttering glitch in Suran (you will know what I mean if you watch the video) but for the life of me I could not avoid it. You see that I hesitate for a second before I walk below the two banners just before that glitch hits. I did this run several times and it always glitched at that exact spot or somewhere near it. I could have edited it out, but that made for an ugly cut in the middle of the scene, so I just left it in.

Here is another one:

This time around I took advantage from Movie Makers’ ability to overlay titles and captions over the image frames. It probably took me 3 minutes to do this whole thing – its’ that easy.

Also, if you think I’m moving way to fast, you are right. But I’m not cheating or artificially speeding up the video. I’m wearing Boots of Blinding Speed (fortify speed 200, blind 100%) and Cuirass of the Savior’s Hide (resist magika 60%) and another enchanted trinket that increases my magika resistance so I can use the boots virtually without penalty.

Anyway, that’s how you get it done. Now that I have FRAPS you may expect to see me make more videos to either supplement my game reviews or just for fun.

This entry was posted in video games and tagged howto. Bookmark the permalink.