If you have read my previous Fallout 3 post you might have gotten an idea that I didn’t really like the game. This would be a wrong assumption. I do like the game – it’s just that I needed to vent about the frustrating bits before I could talk about it in more detail. Let me start from the very begging: namely character creation.

Just like in Oblivion and Morrowind the character creation process takes place in many stages during an extended tutorial that introduces you to the game mechanics. This is naturally a good idea since it eases you into the game and postpones making big decisions (such as which skills to invest into) until you get a handle on how the game works.

In Oblivion this intro level seemed a little forced and silly and pretencious in how it paired you up with the emperor of Tamriel himself, who proceeds to die in your arms and begs you to avenge the world and save his death.

In Fallout 3 your reason for adventuring is a little less grandiose. Your dad skips out of town (and by town I mean hermetically sealed vault where no one enters and no one leaves) and in the process pisses off a lot of people who then decide to take their frustrations up on you. It is all explained in detail, and the extended tutorial actually allows you to get to make a few friends and few enemies inside of the Vault, get the lay of the land and etc. The game starts literally at the moment of your birth when you pick your gender. Then your dad rolls in the “Genetic Age Projection Machine” aka the Face design tool.

The design tools are similar to those used in Oblivion. You get bunch of interlinked sliders that make certain features bigger and/or smaller. Sliding one of them will often reposition several others which makes me wonder why haven’t they consolidated them. It is fairly flexible but similarly to Oblivion the haircut choices are atrocious – especially if you choose to play a lady (for a dude you can always go with a buzz cut or a bald head and call it a day).

I must ask a question here. Is there a reason why Bethesda forces us to design our characters in a murky artificial light setting? In Oblivion you were in a dungeon lit only by flickering torches. In Fallout 3 the machine interface uses a retro CRT display that dims in and out. Both games give you a finely tuned control over your skin tone, shading, blush, eye shadows and etc. Sadly, the light conditions during character creation are poorer than the ones you will be experiencing 80% of time during the game. A face designed in that light may look very different in full sunlight. Some skin tones and shading choices that seem fine in the murky twilight look horrible under proper lighting. Is being able to design your facial features in a bright environment really that much to ask? 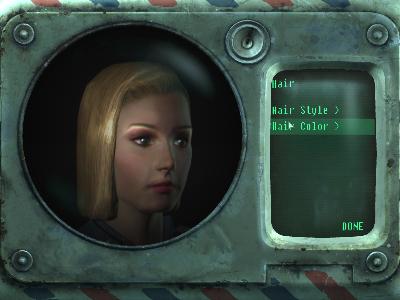 Since you take control of your character at different ages (11 and then 16) there is some sort of reverse aging algorithm that tries to figure out how your face would look taking what you designed as a base sample. The results are usually pretty…. Creepy. While it worked pretty well for NPC’s the reverse aging plunged my character deep into the uncanny valley. Fortunately this was only a temporary inconvenience.

The S.P.E.C.I.A.L. system that governs the skills, attributes and perks is very different from the one used by Morrowind and Oblivion. I believe it was transplanted directly from the previous Fallout installments with little or no modifications. It is an old school approach that has you earning XP points for doing quests and killing things and then picking up skills points and perks when you level up. You can spend these points however you want. For example, you can earn a level by running around and shooting things, and then pump all the earned points into skills such as science and medicine. I sort of liked the advancement system from previous Bethesda games that increased skills that you were actively using. It made sense to me. I’m not complaining though – Fallout 3 is standard approach seen in hundreds of RPG’s and it works well. 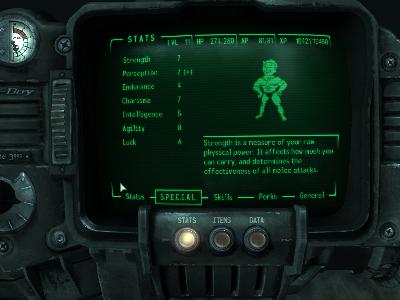 The perk system is a little silly though. Each time you level up you get to pick up one special bonus or ability. There is a wide range of interesting perks to choose from, but to me they all seem like inherent talents, or character background stuff that you would pick at character creation rather than as you advance. For example, perks like “Dady’s Boy/Girl” (gives you bonus to science/medicine skills) or “Educated” (get more skill points on level up) seems like stuff you would have picked up in your childhood rather than during your adventures in the wasteland.

But that’s just my opinion. The perks are a carry over from the previous fallout games and are part of these series’ flavor I guess. I don’t dislike them – I just find them a bit odd.

Morrowind had a great inventory screen. It was mouse+keyboard driven and most actions could be accomplished via drag/drop actions or hot keys. Your stats, inventory, map and magic were all opened in separate windows that could be repositioned, re-sized and pinned to any area of the screen. You could arrange them the way you wanted and most importantly you could have all this information on a single screen. So for example, you could observe how your stats change when drinking potions or equipping items.

Oblivion inventory on the other hand was designed to be game pad friendly. It spread the information across multiple tabs and minimized the amount of information displayed on the single screen. A console player can navigate such menu very rapidly – the left analog stick flips through tabs. The right one scrolls the screen up and down, and buttons initiate different actions. Navigating it with a mouse however is tedious. A simple action such as equipping a magical ring and then checking how it affects your stats takes at least 4-5 clicks and switching through 2-3 different screens.

Fallout 3 continues this tradition and gives you an interface divided into many screens, sub-screens and sections. It was clearly designed with console players in mind and as a die-hard PC gamer and mouse enthusiast I should hate it with a passion. But I don’t. 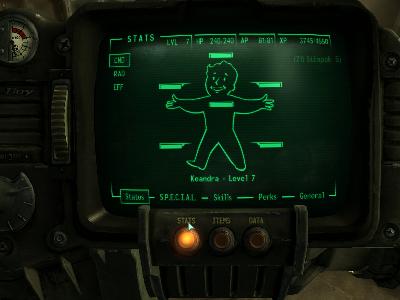 The best thing about this interface is the style. The sheer awesomeness of seeing my character raise the arm-mounted Pip-boy screen to her face made me completely forget how awkward and difficult to use it really is. The interface has clunky retro buttons with that characteristic “old electronic device” snap. It uses a green monochrome screen that flickers each time you press a button. The whole thing sometimes sways up and down or side to side as your character moves her hand. It has a genuine look and feel of a classy retro hardware – and you can almost write off the awkwardness of the interface as an inherent design feature of the Pip-Boy. This is how you turn a flaw into a feature.

The Leather Jacket of +5 to Mele

Let’s talk about the inventory system itself. I noticed that with each game Betsheda reduces the amount of clothes and armor your character can wear. In Morrowind you could mix and match clothing (shirts, pants, skirts) and armor components for each body part (chest plate, helmet, greaves, two gauntlets, two plaudrons, etc…).

Oblivion simplified this prohibiting you from wearing normal clothing under the armor, making plaudrons integral part of the chest armor, and making gauntlet pairs inseparable. It also introduced one-piece armors that covered all body areas except for the head.

This concept returns in Fallout 3. There are only two types of clothing in these game: head gear, and full body costumes. You really don’t get to mix and match different clothing items which is little disappointing. I was sort of looking forward to making an unique looking mad-max style combination of battered armor plates, street clothes spikes and etc.. This is not possible – you only get one piece suits. Granted, there is a variety of them in the game (for example Riders have 4-5 different armor variants) but it is a little bland.

On the upside, Fallout 3 implements something that I talked about in one of my previous posts: it makes wearing the right clothes for the right job beneficial. You see, each type of clothing offers different bonuses. For example wearing a lab coat will boost your science skill. Wearing a business suit will boost your speech and barter skills. Wearing hockey mask and a leather jacket will make you better in melee.

This means that visiting the local merchant while wearing your combat armor is less profitable than strolling in a nice business suit. It makes you want to keep all these different pieces of clothing that you’d normally sell and discard as you get better armor from looted foes. 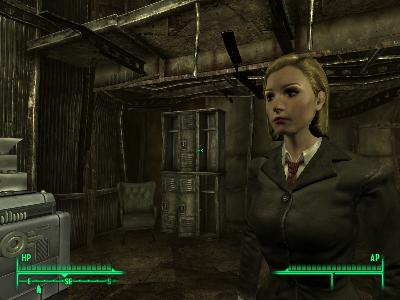 Sadly, the clothing still has no impact on how the NPC’s treat you. For example I was able to stroll into Megaton wearing looted Rider gear and was greeted by the locals with open arms. These locals then proceed to warn me about the evil Riders in the wasteland who wear armor that looks just like mine.

So we are still not there. As far as I can tell, none of the recent RPG games uses clothing to modify how NPC’s react to you. I’d really love to see someone implement this.

This post is already running a little long, but let me mention another “feature” of the interface: hidden functionality that is never explained in the game. During the tutorial you are taught how to use the Pip-Boy and how to interact with the game environment. Three important lessons were somehow omitted:

Repairing your items is important. The merchants charge you an arm and a leg for even minor condition improvements. Using their services is really just a huge waste of money. If you pump a few points into your Repair skill you should be a able to keep most of your gear in shape by yourself.

Sadly no one ever tells you that you can open the repair screen in Pip-Boy by highlighting an item and pressing R. This is mentioned in the manual booklet but not in the game itself. This is problematic, since no one ever reads the manuals anymore. I mean, this game has like an hour long, un-skipable tutorial section. You’d think that reading the 15 page manual wouldn’t be necessary after that. Sadly it is.

Same goes for holstering your weapon. No one ever tells you that you accomplish it by pressing and holding the reload button. Manual mentions this off-hand when it talks about yielding but if you gloss over that section, you will never know.

Finally, the flashlight which is activated by holding down the Pip-Boy key. It is never mentioned in the manual, never even alluded to in the game and not listed in the key-binding menu. It is a genuine hidden feature. Go figure.

That’s all I have for today. Next time I’ll talk about the followers, the setting, the quests and the writing.