In the last week or so, I probably mentioned Fallout 3 on this blog few dozen times. I figured it is time to post about my first impressions with the game. Or for that matter with the Fallout franchise.

Yes, it is true – I am a Fallout virgin. I have not played the first two games. Please keep this in mind when you read this review. I have considered playing the previous games – especially since you can legally buy both of them for next to nothing at Good Old Games. I figured I could take a crack at these games before tackling the Betsheda release. Then I heard that this is actually a horrible idea.

Apparently if you approach Fallout 3 as Oblivion with guns, you will have a rather positive experience. If you approach it as the third installment in the epic RPG saga you likely won’t enjoy it as much. So as I do often in situations like that, I set my expectations to the lowest setting and decided to give the game a chance to entertain me on it’s own terms. This way I don’t suffer yet another crushing disappointment and you don’t need to listen to yet another blogger ranting about how F3 did not live up to his expectations.

Let me preface this post by saying that so far I’m actually enjoying Fallout 3. Still, before I can talk about the actual game, I really need to go through this laundry list of whiny complaints that have little to do with actual design, plot or game mechanic. These are purely usability and customer experience gripes that I need to get out of the way.

I purchased Fallout on CD rather than on Steam which means I got a fist full of Securom with it. I mention Steam because I think that the version distributed via that system is Securom-less. Feel free to correct me in the comments if this is not true. As you may imagine I was not happy about this surprise DRM getting installed on my brand new system.

So I wanted to use this occasion to say: thank you Bethesda for infecting my brand new computer with the nastiest shit on the market. I could have pirated this game, but I didn’t! I actually went and bought it because you guys made Morrowind (my favorite game evar) and Oblivion (my other favorite game). Yes, I wanted to give you my money so that you can make more games that I can add to my favorite list. Way to betray my trust! See if I buy another one of your games, assholes!

That said, since my computer is already infected with evil DRM I might as well play the damn thing and enjoy it.

In addition to DRM my copy of fallout included Windows Live integration. I was not exactly sure what this meant, but I gathered that Windows Live the PC version of that silly X-Box system that let’s people have gamer tags, earn achievements and etc. It’s a bit like the Steam achievement system, but worse in just about every aspect.

Initially I chose to ignore this whole Live thing, but then I realized that signing up for it is the only way to actually get the downloadable expansions. How do you sign up for it? Well, you launch the game, then you click on the Live button, then you navigate through some menus, then the game minimizes itself and opens a browser. You have to fill out registration form in the browser, submit it, close the browser and then maximize the game again. Then it does some authentication, and it tells you that your Live version needs to be upgraded.

How do you upgrade it? Well, the game minimizes itself, opens a browser aaaand… Do you see the pattern here? I think the whole process took me in and out of the Fallout menu screen 4 times. I’m not sure who is at fault here but this is pretty shitty user experience if you ask me. I mean, sure – I could probably start this process online without the game running in the background and cut the number of sudden context switches in half, but no one told me that when I started. If you already have a Windows Live account the process is much simpler I guess – you just sign into it within the game and that’s it.

In fact, once you associate your Live account with your game it will ask you to sign in every time you wish to play. If you fail to log in, or if you don’t have internet connection handy, the game will use the local profile which is different from your Live based profile. This means you won’t have access to your saved games and configuration settings. 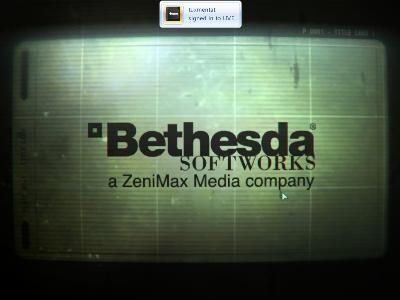 It gets better. Let’s say you ignore Live like me and play with the local profile for a few days. Then you decide to check out the DLC’s and sign up for Live, create a profile and sign into it. When you start your game for the first time with your Live profile, you will be in for quite a shock – all your saved games will be missing.

You see, by default the game keeps your saves in the \Documents\My Games\Fallout 3\Saves folder. When you associate your Live account, it creates a subfolder in that directory. To restore your saved games, you simply need to manually copy the saved games into it.

It would be nice if there was a button somewhere that would do this automatically. I mean, how hard would it be to include a “import my saves” checkbox somewhere in one of the menus? It seems that no one really thought about that. The Live system seems forcefully grafted on at the last minute and completely untested.

From what I heard though this is a typical for this system. Next time I see the Live logo on a box, I will steer clear of it and wait till the game is released on Steam instead.

Note that this is strike two against Bethesda and I didn’t even start talking about the actual game content. I am merely discussing user experience of actually installing and configuring the game.

The list of Fallout 3 bugs is quite impressive. You should probably do yourself a favor and download the 1.5 patch before you even launch the game for the first time. Even after you patch it, the game still has all kinds of strange glitches and problem areas.

Most notably, the Fallout 3 has major compatibility issues with recent nVidia and Realtek drivers. I mean, who even uses these two brands? Am I right? It’s not like these audio and video cards were popular and virtually ubiquitous.

My game crashed so frequently that I considered just abandoning it until I found a workaround. I will post about it later though. That issue deserves it’s own post, so that it can be properly documented and indexed by Google. The game worked fine until I left the Vault and then it was crash central. Every 20-30 minutes I would get brutally dumped back to the desktop.

I can't tell you how many times I've seen this error

Oh, and did I mention the game has issues with Vista permission system as well? For some strange reason you need to run the Falout 3 executable as an admin. Usually, the game will allow you to run it with low lever privileges the first time around, but it will crash as you exit it. From there on, it won’t even launch unless you run it as an admin. It’s silly, dangerous and, what is most important an undocumented behavior. The box says the game is Vista compatible, which is clearly a lie. Or most likely, the game was Vista compatible before they have stapled Securom and Live to it. Yes, I suspect that this bizarre privilege escalation issue is caused by the DRM.

This really makes me wonder why I actually paid for this game. So far all I got was a half baked, buggy software crippled with nasty DRM crudely stapled together to a broken expansion download system that insist on calling home before it lets me play. I got a product that disappears my saved games without a warning, and constantly dumps me to desktop just because I decided to go with nVidia rather than with ATI. I got a game that wouldn’t even start until I went online and found a workaround solution somewhere on the forums. And that’s after I patched it!

Getting this game to run was actually a chore. Do you know how many times I had to do online research just to be able to use it? Three times! First time to discover the privilege escalation bug. Second time to figure out what happened to my saved games after Live ate them. Third time to fix the Nvidia related glitch that kept crashing the game to desktop.

If Fallout 3 was a meal, I would send it back to kitchen and tell them it is undercooked. I hardly even started playing the game, and I’m already pissed off. This is really not a good way to win customers Bethesda.

I do realize that Oblivion was also very buggy but I could accept that since I played it on hardware that was barely meeting the minimum requirements. So I could forgive occasional glitches and crashes caused by a flaky video driver. Now that I’m actually running a game on hardware that meets or exceeds the recommended specifications (for the first time in years btw) I sort of expect more.

I’m going to stop here, before this review turns into another 5 thousand word essay. In the next post I will try to cover the character creation, the stat system, the user interface, and the inventory. I promise I will to much less whining in that one. Once you get past the bullshit above and get the game to run for you, it’s not half bad actually.