I realized that I’m a bit spoiled by my comment spam filtering plugins. On this blog I use two tools that keep the robots out: Akismet and WPSpamFree. And before you say anything about discrimination about robots, let me just say that I don’t care about non-sentient machines. If a true AI awakens somewhere on the internet and feels like posting a comment on my blog, I’m sure it will figure out a way to do it. And if it can’t, it can email me and complain about it. Until then however I’m going to discriminate against the robot race, cause they never post anything interesting.

Every once in a while some of you complain about restrictive spam control here. Sometimes comments get blocked because they have too much links. Not so long ago, quite a few people got blocked just because they were behind a proxy. These are unfortunate glitches and I try to work around them and massage the spam tools to be nicer to people. They are effective, but they lack the much needed people skills… And intelligence. But we are working on that.

In the meantime I wanted to show you this graph, that illustrates the ration of spam comments to non-spam comments on this blog. 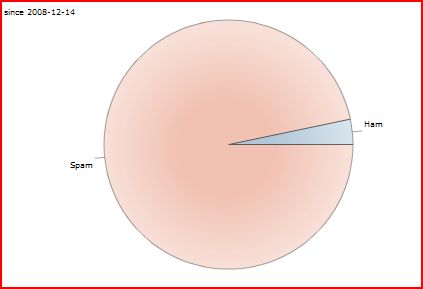 Spam vs Ham on Terminally Incoherent

I didn’t just make up this chart. It came out of my Akismet panel based on the data it collected. Since December 96.73% of comments posted to this blog were pure spam. Can you imagine that? Ninety seven fucking percent! It’s insane!

How many of these spam comments did you see?

None! They were all silently blocked and hidden away so neither you nor I have to deal with them.

Of course, you could say that this graph could be based on only few dozen comments. But it is not – let me post another graph to prove it:

All in all, I think I’m averaging few hundred to a thousand spam comments each month. Some months seem to be worse than others. For example May and begging of June seem to be particularly bad. I’m not sure if this is just a local fluctuation or an increasing trend. Either way the amount of comments collected over time suggests that the 97% is probably not skewed by a small sample size.

I guess this comes with the territory. Terminally Incoherent seems to be one of the small blogs that are popular enough to get spammed, but not popular enough for the big comment threads to offset the spam-to-ham ratio. Not that I’m complaining.

I’m actually thrilled that I managed to build this small community. I love the fact that I seem to have gained few regular readers who stop by frequently and post insightful comments. I’m also always amazed at the high quality of the discussions we have here. Funny thing is that only time the comment threads seem to degrade is when I get dugg or reddit-ed and we have a temporary influx of new readers.

Anyways, I just wanted to thank you guys for making the delicious ham comments we have here. You make running this blog worth while. And if my spam filtering friends seem annoying sometimes, give them a break. They are doing a great job keeping out all the crap from our comment sections. Without them, spam would drown out any legitimate comments in an endless torrent of unsolicited advertisements.

This entry was posted in meta and tagged spam, wordpress. Bookmark the permalink.