I realized that I promised to post about my Fallout 3 crash solution at some point. I might as well do it now, while it is still fresh in my memory. Sorry if this post is a little dry, but this needs to be documented for the good of humanity.

The game worked great while I was in the vault. My issues started when I got out of it. My first crash happened literally seconds after leaving the vault. I turned around to see how the vault entrance looked behind me an BOOM! The game crashed to desktop giving me the extremely descriptive error message:

Really? It did? Hey, thanks for letting me know! If you didn’t I would be sitting here wandering why Capital Wasteland looks exactly like my desktop background.

Actually, I take that back. This was after all a generic Vista dialog that shows up whenever something really, really fucked up happens inside a program. It means that the game itself crashed hard – it was not an exception or a runtime error that someone forgot to catch. It was a “holly shit, this was not supposed to happen” type of thing.

Whatever – I thought – shit happens. After all, Oblivion used to crap out on me like this every once in a while but it was otherwise totally playable. So I launched the game again, and this time I managed to explore a little bit of the wasteland without a crash. Until, that is, I reached the abandoned school and the game crapped out on me again. This was probably after 20-30 minutes of me aimlessly exploring the wasteland. Same stupid message.

I restarted the game, leaded it, explored the school and went outside and the game crashed again. That was it. After that, every time I would load the game from that auto-save outside the school’s door it would dump me back to the desktop. Something was seriously wrong here.

My first instinct was to google the error message but as you could imagine it was pretty much like searching for a needle in a haystack… of other needles… at night… blindfolded… and wearing mittens. Everyone has seen this message and wrote a blog/and or forum post about it. Adding “fallout 3” to the search query didn’t really improve the results.

It did give me back a lot of forum discussion threads but I quickly realized it is one of those vague problems that everyone talks about on the internet but no one has a solution. It’s like that damn irql not less or equal shit which can be triggered by just about anything – hardware, software, the phase of the moon, or the color of your underwear.

It was clear to me that I was not going to find a solution this way. So I decided to dig deeper. So I opened event viewer and almost immediately found the culprit: 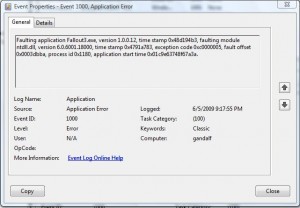 If you can’t figure it out from the screen, let me spell it out for you. This error log, clearly implicates the file called nvd3dum.dll as the one causing or facilitating the crash. The naming convention seems familiar, isn’t it? Who would name their DLL’s with an nvd prefix? Why nVidia of course – the maker of my video card.

So I found the reason for the crash – my video card driver and Fallout 3 were not playing nice. Armed this information I did some more googling and came up with a solution.

Using the name of the DLL in my research yielded much better results than before. For example, this forum threadwas extremely helpful in pinpointing the exact issue.

This is what helped me:

Presto! No more crashes! Well, for the most part. The game still sometimes bugs out in V.A.T.S. but it is very rare now. I have no clue what Water Multisampling is but I’m assuming it makes the puddles and rivers in the game look more liquidy and watery. There is something in the way they go about it though, that causes Fallout 3 to crash to desktop.

Interestingly enough it only happens with the recent drivers. So if you have an older card and an older driver you will be fine. Downgrading the drivers also works. But I found it easier just to crank that feature down to low and enjoy the game without it. Frankly I can’t tell the difference so the multisampling effect was evidently lost on me anyway.

Now the million dollar question is, who to blame for this. Is this yet another Bethesda bug? Or is this yet another case of a badly written 64 bit driver? Initially I assumed it was a bug in the game code. Now I’m not sure.

Either way, if you are experiencing this crash, the way to get rid of it is to disable that multisampling feature. I hope this will get indexed by google and will show up in search results where people can find it and get on with their game.

This entry was posted in video games and tagged fallout 3, howto. Bookmark the permalink.