As you know, I got myself a beast of a gaming machine this year. This is why I have been reviewing all these recent games, and complaining how much I hate most of them. So, I decided to install and run one of my all time favorite games: Morrowind. I’m not going to lie, reading Rutskam’s Let’s Play Morrowind series soft of forced my hand here. If you haven’t checked it out yet, go and read it – it’s hilarious, and it will likely make you want to play Morrowind all over again.

Morrowind is actually a fairly old game, and so it was running smoothly even on my old piece of junk computer. I had no doubts it will fly on my new and shiny beast. In fact, since I had lots of power to spare I decided to install every single FPS draining Morrowind Mod I could think of and see how my machine will handle it. For a while now I wanted to test the Graphic Extender Mod that allows you to almost completely switch off the “fog of war” effect and extends your field of vision almost indefinitely. Unfortunately, that mod made the game virtually unplayable on my old machine. This time around, things would be different though.

While I was messing around with the game, I decided to document my installation procedure in case I will need to repeat it at some point in the future. My build is loosely based on this lengthy manual. There are some slight differences though.

For some reason, after you install Bloodmoon and/or Bloodmoon patch the game will no longer run in in user space. It will simply crash and burn. This is not very surprising though, since both Fallout 3 and Oblicion did the same thing. With Morriwind this is totally forgivable though – back when the game was released, Microsoft was still confident that their grip on the OS market is absolute and that they never actually had to write any new code again. Then of course three things happened: Ubuntu, the iPhone and John Hodgman saying “and I’m a PC”. As a result we got Vista – a half assed attempt to catch up with the OS market which had left Microsoft in the dust 3-4 years ago. But I digress – just make sure you run Morrowind as Admin and you will be fine.

How is the graphics extender working out for me? Pretty well. It’s like playing a whole new game. Check it out for yourself – here is my character hanging out near the Stilt Strider in Balamora: 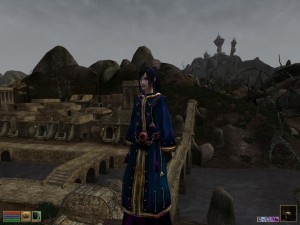 In Balamora - notice the Dwemer ruins visible in the background. Normally they can't be seen from this distance.

Oh, and here is Vivec in it’s full glory: 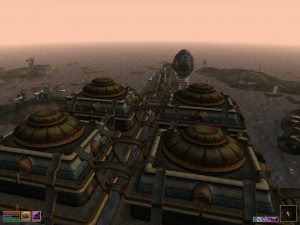 Vivec as seen from the roof of Foreign Quarter.

With the distant lands feature enabled this nightmarish city actually becomes somewhat navigable. Especially if your character is a magic user specializing in Alteration and likes to levitate everywhere. Some people complain that the lack of the ever present fog robs the game out of it’s mystery. Some people call it a source of “visual spoilers” – as the ability to see far ahead allows you to locate ruins and/or terrain features that were previously hidden from you. I think it actually makes the game better.

One of the big flaws of Morrowind is that it’s quests are incredibly vague in terms of directions. Most of the time NPC’s won’t even bother to mark the quest location on your map. They will simply tell you it’s “southwest from here”. This meant you spent most of the game getting lost trying to find the location. Sometimes you would pass right by i 7 or 8 times before you actually found it. With distant land feature enabled, you can now turn southwest and actually see the where you are supposed to go. So I like it.

Also, in this thread we talk about awesome Morrowind mods. Did I fail to include one of your favorites here? Let me know!

This entry was posted in video games and tagged morrowind. Bookmark the permalink.