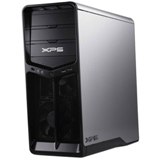 As you may or may not have heard, I finally got myself a new computer. I’ve been tweeting about it for the past few days, but if you don’t follow me on Twitter or you are not my friend on Facebook you have likely missed it. I figured that I might as well share the specs here for anyone that is interested. Especially since my next post is a long rant that describes how the setup of this baby went wrong in spectacular ways. Literally everything that could go wrong, went wrong. But more on that tomorrow. Today I just want to talk about the machine itself.

I think I previously mentioned that I was thinking about building a gaming rig from scratch. Ultimately I decided against that idea. I’m not a hardware guy, and trying to put together a machine in my tiny room didn’t seem like a good idea. If I had a big desk, or a work bench where I could spread the parts around and live them there overnight that would be a different story. I opted for paying a little bit more, and having a pre-assembled box shipped to me overnight.

Dell was having some discounts on Memorial Day, and so I bought a brand new XPS 630i machine with the following specs:

I like everything on that list, except the Vista bit. But I figured out that there is no point clutching onto XP for much longer. It will be end of lifed in a few years and I sort of wanted to make the jump to the 64 bit world sooner than later. Also, when Windows 7 comes along sometime next year, it will likely be easier to upgrade to it from Vista than it would be from XP.

I could have paid $100 to get XP on this machine but at the time it seemed a good idea to just go with the newer OS. After all, Vista has been on the market for a while now. Most of the major annoyances were probably fixed by now, or there are workarounds for them.

In addition I figured that more and more games will be using DirectX 10 so it is worth for me to jump on that bandwagon now. It could have been a bad decision – I don’t know.

Once I got it set up, and configured properly (see the post tomorrow) I really don’t have major gripes about Vista. My main problem is the fact that Microsoft didn’t see fit to include any of their XP Powertoys in this release. I especially liked the Powertoy Calculator and the Image Resizer. I did find alternatives though – Speedcrunch and Microsoft Office Picture Manager (which is not as handy and not free but will do for now).

All the other software I use frequently is supported – including Vim, which does have a 64 bit windows version these days. It doesn’t have a nice GUI installer but it does work fairly well.

The best thing about this new machine is that it is a beast. Vista is famous for it’s incredible slowness – especially when you use the Areo theme. On my computer it just files – I have yet to notice any slowdowns or wait for anything to load. Everything seems instantaneous. The rig even boots up in mere seconds – it is quite amazing.

One of the first games I installed on it was Fallout 3 (topic for a whole new post) and it flies as well. In fact, I know that the game has those nice loading screens that tell you some statistical information (number of people killed, quests completed) and gives you a quote of some sort to read. These things disappear so fast for me that I can’t even read them. Changing locations is more or less seamless. I’m loving it!

I haven’t had a chance to test it on too many different games yet but I’m assuming that I can expect this sort of performance from most of the titles I own. It is such a huge difference after using my old machine it makes me giggle every time something that previously took several seconds now takes virtually no time whatsoever.

Last time I felt this much computing power under my fingertips was when I was working on the brand new Sun workstation my thesis mentor got on a grant. I get the same “holly crap, this thing is fast” feeling.

I know this will pass. One day this rig will become so sluggish and so outdated I will no longer be able to work on it. In fact, I’m pretty sure that in a few months someone, somewhere will release a game that won’t even run on this thing. But until then I will enjoy having more power that I know what to do with.

Anyway, this is my new baby. Tomorrow I will tell you how it all went wrong. First thing I noticed was that it won’t fit under my desk – which has one of those “computer shelf” things. It is a fraction of an inch to small for this machine to fit. It looked big enough when I was eying it, but I was wrong. Things only got worse from that point on.

This entry was posted in sysadmin notes and tagged vista, windows, xps 630i. Bookmark the permalink.


19 Responses to The New Computer