Here is my beef about superhero movies that are coming out of Hollywood lately: they all suffer from what I call a Solitary Superhero Syndrome.

“You are making this up, aren’t you? There is no such thing.”

Of course I’m making this up. It’s not a medical condition – it is a trope of sorts. I’d check TV tropes to see if it has been documented already but that’s dangerous. Every visit to the TV Tropes website ends up with me sitting there for hours clicking through tropes and accomplishing absolutely nothing for the rest of the day. So no, I will not check it.

Here is a question: what is the common thread running through all Hollywood productions based on Marvel and/or DC licenses? Think about it for a second. Give up? Ok, I’ll tell you. One thing they have in common is the fact that they never, ever under any circumstances acknowledge the existence other heroes from a given universe. Every single movie is set up to give the viewer an impression that the titular hero is the only costumed vigilante in existence. And yes, this applies also to the X-Men movies so shut up! Does any of the X-Men films ever acknowledge existence of non-mutant super powered individuals? No, they don’t. When they need need to introduce an iconic villain like the Juggernaut they just pull the mutant card on him and call it a day.

This is in stark opposition to how both Marvel and DC comic book lines work. Their heroes do not exist in a void. They don’t all have their separate insular worlds where they are the only guy or gal with cool powers. No, most super heroes live in a world where costumed crime fighting is a fact of life. For example, NYC happens to be a home to the Fantastic Four, The Avengers, Spider Man, Dare Devil and a dozen of other less prominent heroes. Every once in a while these folks will run into each other. Often people will compare them to each other or argue who would win in a fight. For example, Peter Parker may find himself talking to a group of Iron Man fan boys. Stuff like that happens. 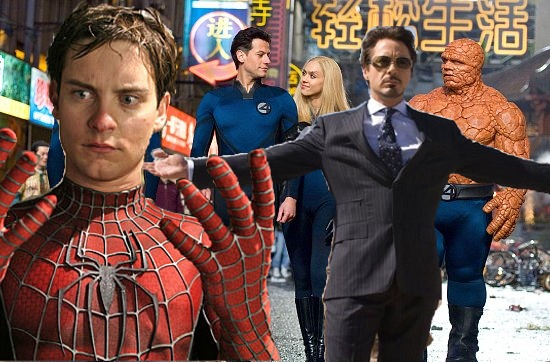 Even some of the DC heroes who are natural loaners – like Batman for example, often do encounter other heroes when they go out of town, or when the said heroes visit their city. Even in DC reality where heroes often get their own cities to protect, costumed crime fighting is usually considered a team sport. Only incredibly powerful, reckless or generally confused/broken/crazy individuals dare to do it alone. And even they often enlist sidekicks and often seek help from their more powerful peers. Cameos and cross-over episodes are something common and expected.

Healthy, superhero settings are full of costumed men and women with varied ranges of power and effectiveness and/or reputation and equal number of insane costumed villains. There is almost always some sort of pecking order that tells everyone who they should be fighting. Popular costumed groups take on big threatening bad guys, while less known and/or powerful groups tackle lesser threats or do mop up operations policing dangerous neighborhoods. For example, when Galactus shows up threatening to eat the Earth it’s probably a job for the Fantastic Four and/or the Avengers. But the likes of Tony Stark or Red Richards are probably not even going to leave home when a some dork with mechanical tentacles (Doctor Octopus) starts terrorizing downtown. That’s something Spiderman can take care of. Similarly they don’t really care about the organized crime ruining shit for everyone in Hell’s Kitchen. Rounding up non-powered mobsters would be a waste of their time, and that’s where someone like Dare Devil can step in.

This type of setup just makes sense. Basically, the heroes all exist in an alternate reality where costumed crime fighting is just something people choose to do and superhuman powers, while still uncommon are definitely not rare or unheard of. Costumed heroes and villains are a social phenomenon, and a media darlings. Things don’t work this way in our universe. Think about it – if all of a sudden a super powered hero appeared at a crime scene and started tossing cars at the bad guys we would not be cheered. He would probably be declared a national threat and ganked by SWAT and/or military. He would then probably be restrained and subjected to medical experiments to determine the source of his powers until a human rights activists would intervene on his behalf. Or if the guy had no powers but just a cool gear, he would be promptly institutionalized.

What’s worse, such a hero would stick out like a sore thumb. There would be no costumed villains for him to fight – and if some showed up, they would likely be considered either his accomplices or copycats he inspired. Costumed vigilantism simply wouldn’t work in our reality. That’s why both Marvel and DC have their own alternate universes that are populated by hundreds of spandex wearing heroes.
It is what makes their settings self consistent. This translates both to video games and tabletop RPG’s that embrace this genre and continue the theme envisioning worlds populated by heroes and hero groups.

Hollywood on the other hand insists on having their movies take place here and now – in our universe, where vigilante justice is frowned upon. Doubtlessly they do it to make them more believable. They are probably trying to help us suspend our disbelief better. After all, a single superhero is more believable than thousands, no? But it doesn’t work that way. If Spiderman lived here and now, he wouldn’t wear the red and blue spandex costume. He would probably wear a black trench coat and shades. This is why movie makers usually feel a need to “upgrade” the costumes to make them look at least a bit more plausible and practical than the originals. Because no one in their right mind would wear silly things like that unless… Unless there was a long tradition of costumed crime fighting and silly colorful costumes would be part of the legacy of powerful and revered heroes. I mean, today we laugh at certain musicians who dress up in silly getups and put on crazy shows – but we still buy tickets for said performances. It would be the same in a universe that embraced costumed vigilantism.

Here is a question – why can’t we just have Marvel or DC licensed movie that comes right out and says “Look, this is an alternate reality where costumed crime fighting is a reality. There are people with superpowers all around, and they like to dress up in costumes and fight on the streets. Deal with it!” Why is Hollywood so afraid to make proper superhero movies?

Yes, I’m aware that some of the new Marvel based flicks (Iron Man, Hulk) have been injecting the special cross-over bonus scenes after the credits that are supposed to tie these films to the upcoming Avengers production. This is a step in the right direction. Maybe it’s their way of trying to back-pedal themselves into some sort of coherent continuity with the Marvel universe proper. We will see how the Avengers project thing pans out, but I can tell you my prediction: Avengers will not acknowledge things like the existence of mutants, will not reference Spiderman or Fantastic Four at all, and will go out of it’s way to pretend that members of the Avengers are the only costumed heroes in existence.

This is just something I don’t get. Everyone knows the rules of the super hero genre! Everyone knows how heroes and villains work. Most of comedies and parodies set in this genre do get it right. Venture Bross cartoon even gave us wonderful new vernacular to use for super-villain activities: arching someone – now means being someones arch-nemesis. Serious productions on the other get hung up on the realism and suspension of disbelief crap. Why can’t we just embrace the specifics of the genre just like we embraced the Zombie flicks?

Think about it – everyone knows how Zombies work. Half the time you don’t even need to explain where they came from? Everyone assumes it’s “probably some virus or something”. You can totally make a movie where zombies just show up, and start tearing shit up without a shred of explanation or origin story and people will still enjoy it. Why can’t we do that for super hero flicks? Let’s just tell the viewers that some people have super powers, and costumed crime fighting is a popular past time up front. Then build our story, characterization and plot on top of that. If you do that, you don’t need complex origin stories for every powered individual. You don’t need lengthy introductions. It works. How do I know it works?

Fucking Watchmen! That’s the whole point of that movie really. Watchmen introduces us to an alternate world where costumed crime fighting is a reality – with all the implications and problem this entails. Why can’t we have someone write a script that draws a similar premise for Marvel/DC universe?

Do the big comic book houses are that stringent with their licenses? Do they make you pay every time you name-drop one of their other properties in a licensed production? Or is the problem that major Marvel and DC licenses are now spread thin across many rival movie studios attached to exclusive deals that won’t expire for the next few centuries? I could see how making Spiderman meet Capitan America could be a problem if Marvel gave exclusive licenses for these two characters to different studios. Still, Marvel and DC universes are big. There are dozens of minor heroes and heroines that could be realistically name dropped in order to make the setting work. Someone just hast to be the first to stop the SSS bullshit and write a good movie in proper super hero setting.

This entry was posted in entertainment and tagged superhero. Bookmark the permalink.