I’m writing this review because apparently everyone in the world asked me whether I checked it out yet. Yes, every single person in the fucking world came up to me and was like:

“Luke, you totally need to check out Flash Forward! It’s like Lost!”

Six fucking billion of them! And don’t tell me it’s not possible cause it happened. No matter where I went, someone would pounce from behind a corner and tell me about the show. Work, school, home, bathroom. Even the guy who lives in my fridge was like:

“Dude, close the door – you are letting all the cold out! Oh, and btw – did you watch Flash Forward yet?”

Or, for example, I’m doing laundry the other day and I see Underpants Gnomes crawl out from under the washing machine. But it’s cool cause we worked out a deal so I’m not even worried. We have a mutually beneficial business venture going – I refrain from stepping on them, while they don’t steal my underwear. Works out for everyone. So I let them rifle through the hamper with my brothers dirty clothes and one of the Gnomes says:

“Hey, did you watch Flash Forward yet? I think you would like it!”

Even fucking gnomes asked me! So I figured out that there is no way I can actually get out of watching this thing. Not without escaping civilization to live on some deserted island.

Ok, I’ll watch it then. It’s like Lost right? Ok…. Wait a second. We need to narrow this down. Like lost can mean more than one thing. For example, if you mean Season 1 you are probably trying to say it is a good character driven drama with strong writing and a pinch of mystery.

If you means Season 2 you probably want to say it is a mystery driven show with fairly strong characters and twisted, intriguing plot line.

If you mean Season 3 you are probably trying to say it is a show that sort of gave up on any and all character development and concentrates on maintaining a very disjointed multi-threaded plot line, and delivering fan service in form of new mysteries and Easter eggs with an occasional retcon.

If you mean Seasons 4-5 you are probably trying to say it is a retcon driven show that totally lost it’s original direction an almost entirely flattened out it’s once interesting, well written characters making them mere pawns in a confusing, meandering and disjoint plot. A show where character motivations and personal agendas are purposefully kept a secret to heighten the mystery factor and so the character development and characterization is is kept down to a minimum as not to give anything away.

“Wow, tell us how you really feel about Lost, Luke!”

Yep, I’m a bit disappointed with the direction that show took after Season 2. I still watch it but mostly to see how the hell do they plan to resolve this clusterfuck of a plot.

“Hey Luke, you know that you just hijacked your own blog post to rant about Lost being sucky, right?”

I am perfectly aware of this my friend. My rant has a purpose. After all Flash Forward is supposed to be like Lost in some unknown aspect. What is that aspect? I don’t know. If I had to guess, I would say the logo:

Wow, look at this original, unique edgy title screen. It does not looke like Lost or Heroes title screen at all!

Actually I take that back. They totally ripped off their title screen from Heroes. Put an eclipse there and change the font a bit and you can sue for plagiarism. Or trademark infringement. Or something like that.

The show does have one thing going for it though – the premise is actually somewhat intriguing.

Picture me this: all people in the world simultaneously lose consciousness for exactly two minutes at exactly the same time. Six fucking billion of them! Cars crash, planes fall out of the sky, things explode and etc. Pretty wild, eh? But that’s not all – most people experience vivid visions of the future during the time they were unconscious. They all catch a glimpse of what they will be doing exactly 6 months from now.

Wow. Hell of an idea. I could totally get into something like tha…. Aw, fuck. FBI agents and doctors. Why does this have to be a cop & doctor show? Aren’t there any other interesting professions in the world? I’m just so sick of watching shows about law enforcement agents and medical professionals. You know what this is? It’s a crutch! 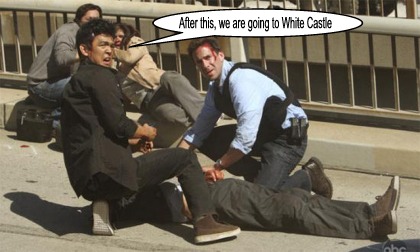 Harold Goes to White Castle without Kumar for the first time!

Speaking of family people, guess who else is in this show? Seth MacFuckingFarlane – the voice of… Well, pretty much everybody on Family Guy and American Dad. And he has this stupid grin on his face in every single scene (well both of them). Maybe they hired him so that he can delivery witty setups for the flash forward sequences. 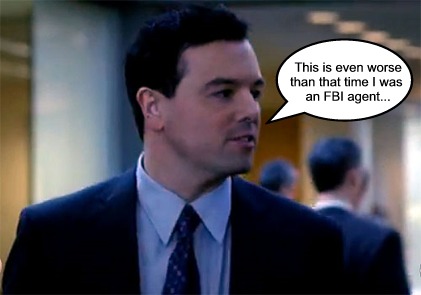 Flash Forward is actually one of Seth's zany flashbacks

I’m sorry, but wasn’t this supposed to be a mysteriously dramatic, mysterious mystery drama with a lot of mysterious mystery? Seeping in mystery. Soaking in secrets. Sizzling in suspense! Rippling with shocking revelations! Like Lost but without an island, and a smoke monster machine, time travel and higlanders dudes.

But how do you make a riveting drama when Seth’s voice sounds 80% like peter griffin, and John Cho looks like he is about to pull out a bong and call his friend Kumar over to share it. It just doesn’t work. You don’t out comedians that specialize in toilet humor and fart jokes on a serious show. I mean, down the road you can probably include one or two as a guest star, but you don’t put guys like that in the pilot. That’s like putting Seinfield in the permanent cast of Lost and trying to play it straight: 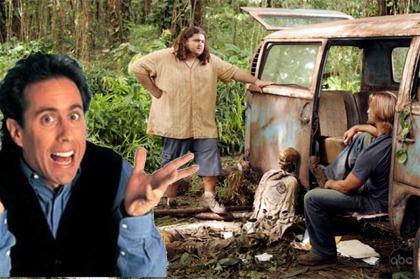 What is the deal with the smoke monster? Is it smoke or is it a monster? I want to know!

I tried to like it. I gave it a chance. But I just don’t buy it. It failed to grasp my attention the way the first season of Lost, or Heroes did. It just doesn’t have that… Thing! Some shows have, some shows don’t. I really don’t know how to explain it but I’ll try.

First off, I don’t care about any of the characters they have introduced so far. They are all dull, boring and generic. I mean, you really can’t get more generic than this:

Jesus fucking Christ! That’s pretty much the list of characters from every show ever made. If I was trying to write the dullest show on the planet, this is exactly the type of cast I would use. What’s worse the show had absolutely no character conflict. At least none that I could detect. Good shows give you that sort of thing right from the get go. The whole first season of Lost was basically the survivors trying not to kill or drive each other crazy. The crew of Moya on Farscape could barely even tolerate each other at first. The crew of Firefly had to figure out whether to cash in, or take huge risk by harboring River and Simon. On Heroes each protagonist started off neck deep in shit, and had to crawl out first.

Flash forward however there is none of that. The two partners are best pals. The main character has a loving family and no problems other than the weird phenomena that just happened. No one is butting heads. Everyone loves each other, everyone is friends. The only source of drama is this nebulous phenomenon. What the fuck is this?

Not to mention that the show already spoiled most major developments for us. We know that John Chos’ character is going to die. We know that the loving doctor-wife will leave her husband because the flash-forward case causes him to hit the bottle again…. What is this. Why do they do that?

The show had two potential sources of character drama (emphasis on potential) – the main characters marital problems and his friendship with his FBI partner. But since we saw the flash-forwards of these people, we now know what will happen to them. Drama and suspense just got ruined. Good job!

Speaking of boring characters, I have a question to those of you who watched the show. Who the fuck are we supposed to ship for in this thing? Am I dense and just don’t see it, or does the show have no shippable pairings. I’m not really a shipper type, but last time I checked a good amount of unresolved sexual tension between two or more main characters is what makes or breaks a TV series. Most shows go for one official will-they-won’t-they couple. More ambitious writers add a background ship as well. Of course if you really want to drive your fan base bonkers you want to have two intersecting love triangles with a shared vertex, and at least one platonic best buddy type relationship could be creatively misinterpreted by slash fanfic writers. Seriously, I didn’t make this up – that’s how you make TV. It’s science. If you want big fan base, you need provide shipable configurations. The first episode of Flash Forward has none, which does not bode well for it.

“But the show has an awesome premise, no? That alone can carry it for a while!”

Yes, for one season. Maybe two. The show has a deadline after all, does it not? In 6 months of time something happens. There is a reason why everyone in the world had these visions of the future, and that reason will need to be explained. Furthermore we will see the visions introduced on the show play out in real time and we will find out what led to them, and what are their implications. That should be the climax of the show, and a resolution come swiftly afterward.

If the fateful date comes and goes, and nothing is resolved while the protagonists are still trying to piece the puzzle together and are no closer to the resolution you might as well call this show Lost and be done. If the mystery of the flash forward is resolved, but the show keeps on going then you can call this show Heroes and be done with it as well. And if you keep stalling and stretching the 6 months into an infinity season after season then people will realize you are stalling and lose interest.

The show has a finite lifetime, which is actually not a bad thing. I’m a firm believer that TV series should end when their story runs its course, not after they jump the shark for the sixth time and ratings fall to abysmal levels. Sadly networks think otherwise and I predict that if this show is successful it will go on forever. However, if the ratings are not mind blowing… Well, then they will can it we will never find out what the hell was the flash forward vision all about. Without any UST or official ship to tease the fan base with the latter seems more likely than the former.