Last week I wrote about developing a simple hello world app for your blackberry. Today I want to go one step further and show you how to make a real world application that actually does something. Of course since we are all learning to use this new API I want to keep it simple, bare bones and straightforward. We can add bells and whistles later.

For now I just wanted to get a handle on using the basic GUI components, and capturing events such as pressing a button. I don’t particularly care how the app will look. I also don’t care about fancy stuff such as detecting the orientation flip in Storm.

What kind of application would fit all these criteria? Simple? Straightforward? No frills? And yet somehow useful. I pondered this for a little while and came up with this: a dice rolling application. You know, something that emulates rolling one or more dice of a certain type. It’s basically a random number generator attached to a GUI front end. And it’s useful too. Well, for me at least. The ability to generate random numbers in your phone comes in handy when you are into pen & paper RPG games like me.

So I drew up a simple design in my mind. The app would essentially have two input fields. One field would accept the number of dice to be rolled, while the other field would accept the type of dice. For those of you who don’t know this: yes, there are many types of dice. The die you usually see in casinos is what we call a d6 – a six sided dice. We role players also use d4, d8, d10, d12 and d20. When needed we also simulate a d100 by rolling two d10’s (you pick one dice to signify the tens and the other the ones).

The user will type in the values into the two fields, press a button and get the results. Simple and easy to develop. The end result should look like this: 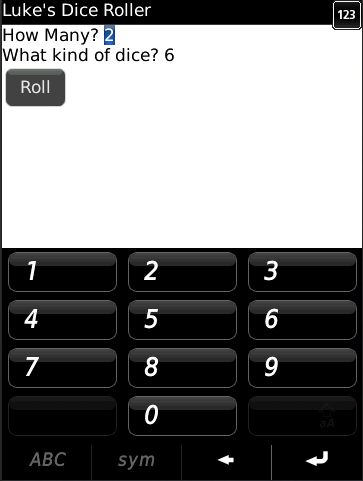 How do we do this? Let me show it to you. I apologize for the wall of text code segment but the app is just a single class and a fairly short one at that. It really doesn’t make much sense to break this code up. Note that this project uses a driver class just like the one I shown you in the Halo World example. I omitted it here because it is all uninteresting boilerplate code. To actually run this code however, you will need to create one yourself.