My Mailman is a Ninja

The mailman who does rounds in my office building is a fucking ninja. I am not shitting you. I have never actually seen him – it’s uncanny. The mail just appears on the desk in the empty cubicle across from me. We don’t really have any front desk, or any logical mail bin where this stuff could be dropped off. Most delivery people usually take few more steps and drop their packages at one of the occupied cubes. Because that’s a normal thing to do.

Our regular UPS and FedEx delivery people usually need a signature. Still, I can hear them coming in and usually greet them as they are walking in, as my cube is actually near the door. Sometimes they smile, sometimes they wave or return the geeing. Sometimes they even stop by and chat with us. But not the US Postal Service guy.

In fact, I don’t even know if he is a guy. He could be a woman. Or both. Or neither. He could be some grossly mutated monster for all I know. I have never actually caught a glimpse of him. I have never heard him open or close the office door. Sometimes, if I’m really attentive I can actually hear the characteristic *plop* sound a bundle of letters makes as it hits the desk behind my back. But every time I turn around, the mailman is long gone. Once I even jumped out of my cubicle to see him walking out the door but he just wasn’t there. He vanished before the mail even hit the desk, alerting me to his presence. 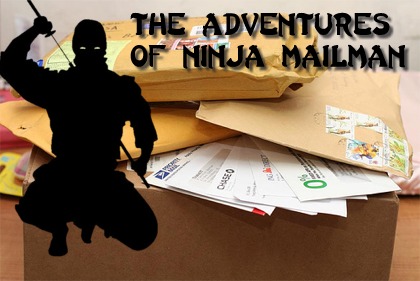 I consulted this experience with my coworkers, and none of them has seen this evasive mailman either. It’s a bit of an office mystery at this point. Is he a man? Is he a woman? How old is he? Is he a Ninja? Is he an ex spy? Former mercenary? A retired hit man? Shadow person from a parallel dimension? We just don’t know!

Every time we set a trap for him, he actually manages to outsmart us. When someone sits in the empty cubicle he leaves the mail on top of the filing cabinets just outside of it. If someone happens to be filing, he just drops it on the floor by the door. If someone is standing an staring at the door he will wait till they turn around, crack the door open just a tiny bit, slide the mail in and then bolt for it.

I even asked the FedEx lady if she has ever seen our mailman, but she never actually met him despite sometimes delivering packages minutes before or after him. Bizarre!

I actually considered setting up a web cam pointing at the door, trying to capture him in action. But then maybe that would be a mistake. Perhaps there is a reason why he does not reveal himself to us. Perhaps the truth is just too frightening. Also, seeing him sneak in would probably ruin this mystery thing we have going on right now.


6 Responses to My Mailman is a Ninja