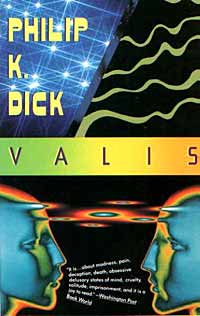 VALIS - contents are crazier than the cover

I love books that fuck with my head so much I can’t think straight for days. I’m serious – I am drawn to complexity, mystery, twisted and convoluted plot that makes little sense. When I finish a book and feel lost, confused and humbled I am usually in love with it. Others consider such experience frustrating. I think it is exhilarating.

Valis is part deliberate mind fuck, part a treatise on spirituality and religion, part science fiction novel and part autobiographical record of Dick’s religious experience/psychotic episode. Dick seamlessly blends all these parts in a delicious literary stew. If you eat this stew it will make your brain think weird thoughts for a while. Perhaps even forever A strange, strange but very fun stew it is.

What is this book about? That is a difficult question. The truth is I still don’t know. It is a story about religion, insanity and everything in between. If there is anything in between that is. After all, what is the difference between religious experience and a psychotic event? How do we distinguish a true touch of the divine, and a brush with insanity?

Of course the problem is that the main character of this story – Horslover Fat is insane. Certifiably so. And so is the narrator of the story (the author himself… Well, maybe…). So we have an unreliable narrator, and an insane protagonist who are both the same person. Or not. Dick is never really clear as to what is real, and what is hallucinated in his twisted world. Confused yet? We have barely started!

Horselover Fat experiences a religious revelation. But it is not your usual run of the mill conversion. He doesn’t just “find God” like people sometimes do. God finds him, and pumps his brain full of alien knowledge. The transmission medium for this knowledge upload is a pink laser beam shot from a possibly alien, self aware satellite from the future (or past… Or the future of the past that never was). This knowledge allows Fat to see colors he does not know names for, talk in ancient languages he never studied, peek through the curtain of time and space, and discover a terrible truth about our reality and about God. Or maybe he was just really, really high that night. Oh wait, he was! Still, insanity and drug abuse can only explain some parts of his vision – the rest is assumed to be a true revelation. What he sees is seeped in gnostic mysticism, techno-babble, and conspiracy theories. What does Fat do about this? He tries to codify and understand his vision by writing about it and explaining it to his friends. That is basically the bulk of this book – Horslover Fat trying to put into words what Philip K Dick has experienced in real life. Yes, that whole thing about pink laser and being high out of his mind – that was all more or less autobiographical. Of course it does not help that the narrator is playing the devil’s advocate and trying his best to torpedo Fat’s theories by applying a healthy doe of skepticism to everything his says. Dick is way more cruel and skeptical of his own crap than you and I would be. So instead of looking for inconsistencies in Fat’s tirades, readers can simply wait for the narrator to point them out. And he does. All the time.

Fat’s friends know he is insane, but humor him by listening to his ravings, ignoring his split persona or his habit of having long drawn out discussions with himself. In fact, they tend to fuel his insanity by picking apart his theories and fixing inconsistent parts by injecting them with their own crackpot musings. Everyone treats this as a fun past time until they see a strange indy movie that seems to be using imagery and symbolism and vocabulary straight from Fat’s prophetic visions. And then, as they say, the shit gets real. As soon as you are convinced Fat’s theories are merely hallucinations, Dick pulls the rug from under your feet and proves that there is more to them. Then he does it again, and again. Eventually you doubt everything, and believe everything he says at the same time.

When I reviewed Life of Pi I mentioned that at the end of the book the narrator asks the reader to pick which version of the story they like – the colorful one with tigers, monkeys and fantastic islands or the mundane one with hardship, potential rape, murder and insanity. If you thought that was a mind screw, Dick will totally pwn you with his twists. There are no two stories here – there is one, but it can be interpreted in several different ways. And every time you think you understand, it flips on you and proves you wrong. So you are forced to pick and chose which parts you think were real, which were fake, and which are irrelevant. Dick gives you blueprints, and you build your own novel which says whatever you decide it says.

Is it a lunatic rant? Is it a true revelation? Is it a work of science fiction? Is it a study of pathological insanity? Who knows. It is Dicks personal religious exegesis in a form of a quirky SF novel. The writing style alternates between light and easy digestible and knowledge sledgehammer to the cranium. Dick’s world is populated by flawed, irreverent characters who may or may not be real. As all religious rants go, Dick can be fuzzy and confusing in places. But unlike most self appointed prophets he delivers his ideas with astonishing eloquence and sense of pacing and purpose. It shows that he did his research, and really thought these things out.

The book is smart, compelling, well written and absolutely fucking nuts. It swept me away and made me fall in love with Philip K. Dick all over again. And yes, I felt that I need to use his full name in this sentence because saying that I fell in love with Dick would just sound wrong. I must confess that I sort of avoided his books for a while. When I was a kid I tried reading A Scanner Darkly – mostly because I loved the Blade Runner movie and someone stole “Do Androids Dream of Electric Sheep” from my local library. So I picked the first Dick book on the shelf instead. Sadly it was just to heavy and to dull for my young impressionable mind back then. So I sort of avoided him for years. I respected him as a prominent SF author, and a literary figure but from afar. That period is over now.

I loved VALIS with all of it’s brilliant, contagious craziness. I inhaled it being absolutely enthralled by Dick’s musings on gnostic spirituality, Christianity religion and reality. I do realize that it’s not a book for everyone, but I highly recommend it. It blown me away, an added Dick to the list of my favorite writers. Go read it!