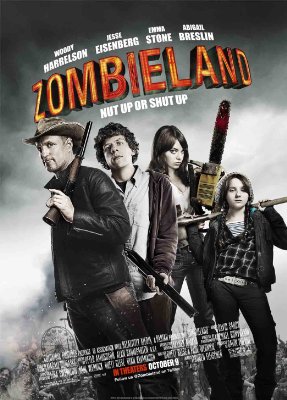 Zombie movies are fun to watch. It is a natural law that is universally understood by everyone. Just like water being wet, sun being bright zombie films are awesome, even when they are terrible. Really, it is really hard to make one that is not enjoyable at least in some small part. As you can probably tell from my reviews, I am a bit of a movie connoisseur. I like my entertainment to be somewhat refined. But like most sane people I do have a soft spot for the whole zombie outbreak genre. And yes, I am implying that if you don’t particularly like zombies then you must be insane. So there.

I don’t know why it is that way, but whenever I see a horde of mindless undead on the screen, my movie critic mode switches off almost completely and I am actually able to enjoy the action on the screen despite paper thin characters or stupid plot twists. Btw, you really don’t need much plot for a good zombie flick. You also don’t need much in the way of character motivation – they are all running away from the walking dead, they all crave companionship and support, and they all compete for scarce resources. The script basically writes itself – you have the why and the how your characters meet, and you have the internal conflict and the external antagonist (faceless zombie horde). Now dream up some basic character archetypes, flesh them out a bit and you are done. Presto: instant entertainment. You would really need to have someone of Geogre Lucas’ caliber to actually take that blueprint and turn int into something that is completely unwatchable.

Making zombie movies is about following the working formula.

But, because it is so easy to churn out these movies, the whole formula is getting a bit old and tired. No one wants to make just a zombie movie – every film maker tries to shake it up a bit. Sometimes the ideas work, sometimes they don’t. The point is that the genre has been evolving a bit since it’s inception. For example, the whole zombie thing has it’s roots in voodoo mythos, but no one remembers that – it is nowadays widely accepted that zombie outbreak is a chemical or biological in nature and that it is highly contagious. Similarly, the undead evolved from slow shambling corpses to fast, and ferocious predators preferred by modern film makers. Still, there is a limit as to how you can change the formula. Zombies are… Well, zombies. They are mindless, they want to eat you, they are mostly impervious to damage (other than head-shots) and being bitten will turn you into one of them.

So if you want to stand out in this genre, you should concentrate on creating memorable characters, pacing and how you tell the story. And this is precisely what Ruben Fleischer, Rhett Reese and Paul Wernick did with Zombieland. They took the old, working template, populated it with quirky and interesting cast of characters and attacked all the standard, cliche zombie movie situations with a healthy dose of enthusiasm. They didn’t try to reinvent the genre, they didn’t try to add new pieces to the mythology and they didn’t try to add psychological drama by cranking up the tension between the characters up to 11. They just tried to create a fun zombie movie. It’s the kind of movie you go to watch with a group of friends, and then laugh, cheer together throughout the whole thing, and then quote it randomly for the rest of the month.

Zombieland takes pretty much every Zombie related trope in existence and works it into the script. Some are played straight, some are subverted, others are mocked ruthlessly. It doesn’t try to break any new ground, or add something new to the genre. It works with the material that was there almost from the begging. But it finds new ways to exploit it and make it work applying a generous dose of humor, genre savvy characters a half-serious approach, heaps of intentional irony and sarcasm. That is the kind of innovation it brings to the genre. Zmbies are fun to begin with, but Zombieland just brings it up a notch.

The film works on many levels. It is a light hearted, but at the same time somewhat dark comedy, a coming of age story, a road trip movie, and an action flick. It jumps seamlessly from self referential humor to tension filled action scene, humorous banter, awkward teenage romance to slapstick. At no point does it even attempt to be serious, or profound. Instead trying to scare you, it aims to entertain. Instead of tragedy, it utilizes comedy and sarcastic wit. It stacks up crowning moments of awesome and crowning moments of funny upon each other as if there was a shortage, and the film makers were afraid they were going to run out.

The cast is great as well. Woody Harrelson is in top of his form as the resident, hot tempered bad ass character. Jesse Eisenberg’s character is the instantly likable, skittish, geeky everyman. Emma Stone makes the excellent quirky, bitchy, and opinionated hot girl with razor sharp tongue, a baggage of issues and excellent ass kicking action chick potential. Then there is Abigail Breslin who is at the perfect age where she is young enough to play a role of the “innocent child”, but old enough not to be “that fucking annoying kid” in the movie. And she realistically does what any 12 year old would do in her place – she learns how to drive a car, shoot a gun, helps her older sister to con and rob people and continuously fails to grasp pop culture references and jokes uttered by other characters. They are all built around old, and well explored archetypes – and perhaps that’s why they work so well in this context.

This is why you should always check the back seat.

Zombieland built from the ground up to be awesome. Seriously this is what was the aim of the movie to being with – the deliver 500 cc’s of concentrated fun directly into your eyeballs. It has some great action sequences, numerous funny moments, lots of memorable quotes, solid characters, good acting and one absolutely epic scene in which… Actually, no. I’m not going to tell you. You just have to see it. If you don’t already know what I’m talking about DO NOT look it up. It is going to ruin the effect. Trust me on this. In fact, even me mentioning it probably partially ruined it a bit already.

Watch it – that’s my recommendation. If you read this blog regularly, you know that I don’t say this often. It’s a good movie. Yes, the premise is a bit silly but it works within the context. And really, that’s all it matters. All you need to know about this movie that it has zombies (lot’s of them), a unlikely group of quirky characters who end up traveling together and fight of a horde of undead in an amusement park at the end of the movie.

Concentrated fun, straight into your eyeballs.