What was your first computer?

Gutten morgen fellow Terminalists! Can I call you that btw? You know, I’m trying to create a brand here. Like, people who watch Star Trek are Trekkies. People who watch Farscape are Scapers. People who like Firefly are… uh… Browncoats… Ok, so it doesn’t always derive from the name. The point is, that I figured that I might as well give my regular readers (all 3 or 4 of them) a name, so we can all pretend like we are a bigger and more awesome group. What do you think?

So, readers of Terminally Incoherent will henceforth be known as Terminalists. I mean, we could go with Terminators, but that would imply we are all evil robots controlled by skynet – and we are not. Most of us are scientists – we dabble in computer science, super science, evil science and assorted fields. Also, the name of the blog is Terminally Incoherent rather than Terminatorly Incoherent, so there. If you have better suggestion please post it in the comments.

Anyways, I seem to hijacked my own post on my own blog. Let me get back to the matter at hand. Let’s play the following game today – please answer the following questions as truthfully as you can:

I mean, you can make stuff up – but it’s more fun if you are honest. Then we can all share the nostalgia. My answers can be found below:

The first computer I have used in my life was this beauty. Let’s see if you can identify it from the picture: 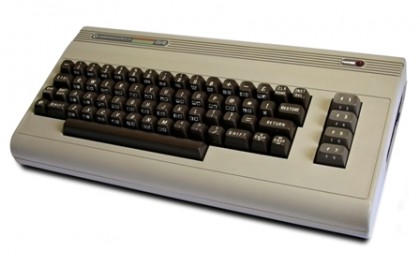 Can you tell what this is?

Did you recognize it? Can you tell me what it is? No? Anyone? Anyone at all? Bueller? Bueller?

Side note: I used the Bueller joke in class once, and none of my students (who were mostly undergrad freshmen and sophomores) got it. None of them saw the fucking movie. Not only that, but the whole class somehow managed to miss (or just ignore) the references to it that exist in pretty much every single thing that was produced in this country in the last 20 years. What the hell?

Little later, I showed them a 3.5″ floppy disk, and they were enthralled. Again, it’s the 3.5″ floppy, not the older 5″. Only one kid actually seen it in real life – he accidentally found a box in his grandpas attic one summer. I mean, really? There is only like 8-10 years of difference between us! What the fuck in hell?

Anyway, the machine is the ancient Commodore 64. You see most of my friend had more naive parents than me, so he was able to convince them that a computational machine like this was a good investment. He actually somehow sold them on the idea he could use it for school, and stuff. Of course all we did with that machine was play video games. From tape.

It’s probably a good idea to mention that this charming little childhood story takes place in Warsaw in late 80’s or early 90’s – which was a great time for piracy. You see, in those years Polish government still haven’t wrapped their heads around the idea of a “personal computer” so software was not covered under copyright law. Piracy was a fact of life. Me and my friend would just walk to the local bazaar and chip in for like 6 cassette tapes, each jam packed with like 30 or 40 illegally copied games and we would still have money left over to buy soda, candy and fireworks which were also legal and no one gave a shit about selling them to minors. We were dirty pirates, pyromaniacs and we had toys that were exact replicas of real life guns – and we grew up just fine.

C64 had a blazing fast 1.02 MHz CPU and a whopping 64KB of RAM. Yes, that’s Mega Hertz and Kilo Bytes folks. And you know what, back then it was plenty fast! At the time, this was possibly the most awesome piece of electronics I have seen in my life. I mean, you would boot it up, type in commands and it would like do shit. It blew my mind.

If you were a Commodore I will now show you something that will make you nostalgia so hard you will pee yourself:

My parents refused to buy the “I can totally use this thing for school” lie, so I had to wait few years to actually get my own machine. By the time they finally caved in, the technology leaped forward a bit and I ended up with this wonderful piece of equipment: 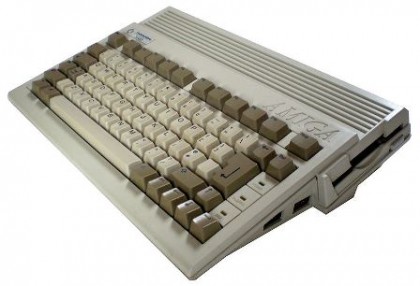 How about this one?

Do you recognize it? It’s the venerable Amiga 600 which was light years ahead of C64: it’s CPU was clocked at 7.16 MHz and it had the incredible 1MB of RAM. You know what that meant? It meant you could basically load entire contents of the 3.5 inc floppy into memory (a floppy formatted for Amiga could fit 720KB) and still have memory to spare. In other words it was a blazing fast gaming machine, seeing how most games at the time would fit on a single floppy. You could load the ENTRIE fucking game into RAM, and have TONS of space left over for the game state, and other crap.

A600 didn’t have a hard drive because it didn’t really need it. It’s OS fit snugly on a single floppy and would boot in under a minute. Besides, most software made for the platform was actually bootable, meaning that you wouldn’t waste memory and CPU cycles running the OS in the background.

Of course, I used the damn thing almost exclusively for video games, and yes – all of them were legally pirated. Yep, Poland still didn’t have laws governing software copyrights and for the longest time I didn’t know that original games didn’t actually include cractros and trainers by default. I’m not kidding. I was so immersed in The Scene, that I didn’t actually know anything else.

The first and the only legaly purchased game I owned was Utopia and it was because some relative thought it would be a nice gesture to actually buy me a game in a nice shiny box instead of like 20 games on loose no-name floppies. No cool cractro, no built in trainer and a shitty, half translated manual – it was a ripoff.

Let me show you the app I used ALL the time – so much that I would actually wear out the floppy to the point it failed:

X-Copy - It's how you coppy that floppy!

This is X-Copy – a popular app that allowed you to… Well… To copy that floppy. Every time I visited a friend, or someone would visit me this was basically the first thing we would launch. But I left the best thing for last – this next image is something that every Amiga 600 users will know and love. The kickstart ROM screen:

Ah… So many memories. This was basically what you young whipper snappers would call the “BIOS” screen on the old A600. I should probably mention it was animooted too – the floppy would jump into the drive, effectively telling you what you should do next. Simple, effective, intuitive and very… Purple. I vaguely remember you could press some key combination at this screen and drop to a very rudimentary, limited shell that would let you run simple diagnostic commands. Anyone remembers how that worked?

As for the computer I am using right now, you already know about it. It’s this one.

TL/DR: In this post we age ourselves by talking about using computers that belong in the museum and wallow in nostalgia. Also, you are now a Terminalist for some reason.


27 Responses to What was your first computer?