When I picked up Glasshouse I didn’t really expect it to be anything special. The blurb on the back cover hinted that it would be a somewhat interesting futuristic detective type story with a twist. In a distant future war veteran tries to escape his past by going into a bio dome style closed circuit experiment. He and other volunteers agree to live in a historical simulation of 20th century American town. For several years they would have no access to advanced technology, no contact with the outside world, and would have to “role play” inside the simulation. Those who manage to adjust to the new environment and play their part will be rewarded with bonuses paid at the conclusion of the experiment. The only problem is that there seems to be more to the experiment than the volunteers are being told. Something sinister is going on, and the hero sets out to find out what it is. 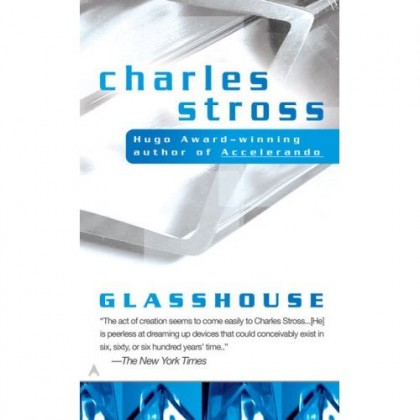 What I expected out of the book was a bit of mystery and suspense. What I got however was an incredible vision of the distant future. What the blurb on the back cover does not tell you is that the experiment is but one part of Charles Stross’ imagined universe. One he meticulously crafts and describes via characters inner monologues or flashback sequences. While the main story is quite good by itself, what really makes this book exceptional is the setting.

In fact, I am even reluctant to describe it to you because discovering how Stross’ world works was half the fun. Let me put it this way: most SF authors imagine that human societies of the future will work pretty much the way they work now. People will spread across the galaxy, live on hundreds of different worlds, but there will be no mind boggling paradigm shifts, or cultural changes save for a few lost worlds which population went feral, and few technological utopian or dystopian worlds that are merely an exception to the rule. Stross however imagines a post-singularity, post scarcity universe in which everything has changed. Nanotechnology which can disassemble and reassemble matter on molecular level is ubiquitous replacing traditional methods of manufacture and traditional medicine. Human minds can be fully digitized, backed up and restored at a whim. People swap physical bodies the way we change clothes and they easily edit or manufacture memories at any time whenever they wish to forget, or remember something. Human societies spread across the galaxies with most of the populations living in cylindrical space habitats interconnected via intricate network of wormhole gates which make everything to be in a walking distance. It is visionary, strange, fresh and original.

Such post-singuarity, post-scarcity settings are basically the new frontier of science fiction. The standard space opera framework we have been using for years now is becoming incredibly stale. Similarly the “5 minutes into the future” novels tend to have a tendency to become “alternative history” rather than “science fiction” as time and science rapidly catches up to them. That’s why I’m always thrilled when I find an author that dares to look beyond that. Who crafts his own vision of a world that may exist after we cross over that magical technological acceleration point, and everything will change forever. I suspect we will see more and more such books in the future. For now though, I recommend Glasshouse as one of those very intriguing visions.

The prevalent theme of the book is identity, self determination and their relation to the concept of reality. Stross brings up some very interesting questions that I haven’t seen discussed in quite a while. For example, what defines who you are? Is it your memories? What if they were erased? What if someone tampered with them and falsified them? How can you distinguish which memories were real? In fact, how can you distinguish reality from a perfect virtual simulation? Does reality even exist? How do you know if you are really alive or trapped in some sort of autonomous solipsistic loop. These are the sort of dilemmas that Robin, the main character of the book deals with on a daily basis.

I highly recommend this book. It’s smart, somewhat philosophical but it never turns into a lecture. Stross keeps things interesting, and whenever things are starting to settle down he shakes them up so you can hardly turn pages fast enough. That said, the ending is a bit abrupt, and cut short. I personally think that the author could easily stretch the content he jam-packed into the epilogue into at least two or three more chapters. Still, this minor flaw does not change my opinion of the book.

Get it and read it. Or if you have read it, let me know how you liked it. Also, I’m always open for book recommendations. Do you have anything in your collection that uses similar distant, post singularity setting?

This entry was posted in literature and tagged charles stross, review, sf. Bookmark the permalink.


7 Responses to Glasshouse by Charles Stross