Charlie Stross is quickly becoming one of my favorite authors. He is very imaginative and his fiction is dense with interesting and well researched ideas. You may probably recall that I highly recommended his novel Glass House and said a few positive words about the somewhat weaker Singularity Sky. I really like this guy.

I sometimes feel like a lot of contemporary SF authors out there while very imaginative seem to be creating in this sterile void. They sort of ignore memes, modern net-culture and work real hard not to make references to any ongoing SF related debates, or point to any contemporary SF work least it somehow soils their novels. Stross is different. He is from the internet and he seems to have his hand on the pulse of the web these days. His work is full of references, nods and memes – it feels vibrant, current and connected.

The only other author I know of that does this sort of thing is Cory Doctorow. His prose reads similar to his blogging on Boing Boing. Since he is exposed to various web oddities every day, strange and yet oddly familiar themes seem to find their way into his writing. Stross is very much just like that. He gets us. knows his audience and he plays it up. Of course he can also hold it back, which is what he did in Singularity Sky which I wasn’t terribly impressed with. To me he is at his best when he is conversational, digressive, referential and web savvy.

Accelerando is a prime example of this style. Each page is “literally” pregnant with ideas and references. And by literally, I of course mean figuratively. Which reminds me – can we please invent and popularize a word that will signify exactly what most people mean when they say literally. You know, like when they say “I literally shit my pants when I read your blog post – it was that good”.

But let’s not digress. Let me show you an example of why I like the way Stross thinks. He is the only SF author I have ever read who actually mentions the solution to the halting problem being accomplished using a Turing Oracle. Most other authors don’t care about stuff like this, but I do and the fact that Charlie Stross does as well is awesome. Oh, and he also mentions that in the future the RIAA and MPAA are bought out by the Russian mob. Think about it, it makes perfect sense – they have pretty much same business ethic when it comes to extortion, and old-school gangsters are probably the most fiercely conservative beings on the surface of our planet. They are almost dinosauric in their willing refusal to go with the times, which makes them perfect candidates to invest in companies with a business model so utterly broken that no one else in the world wanted to have anything to do with them. 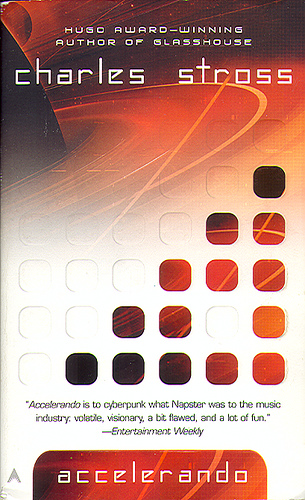 But this is not what Accelerando is about. It is about a modern, deeply dysfunctional, future absorbed family living through the singularity event. Which in Charlie’s book is not really an event but a gradual process which we are able to withes through the eyes of Manfred Macx (an anarcho-altruist with million ideas a minute who travels the world making people rich for free), his daughter Amber (who runs away from her domineering, fiercely traditionalist and conservative mother only to become a sovereign ruler of a colony in the Jovian space, and launch the first interstellar mission to investigate mysterious alien wormhole router) and his grandson Sirhan (a timid, conservative historian trying to chronicle the family history while the solar system is being disassembled and turned into Matrioshka brain).

The last book I read which offered this sort of scope was the Metamorphosis of the Prime Intellect but Accellerando is notably different. Stross pictures the singularity as a gradual process taking place over many years rather than an abrupt event. In fact, at one point he has his characters trying to pinpoint the exact moment singularity actually happened, and coming up with a many varying opinions. In fact, that very discussion prompted me to post this.

Secondly, Stross’ superhuman AI’s grow very gradually, usually starting as sophisticated corporate expert systems. They are naturally not bound by some artificial three laws of robotics, but they don’t immediately go on a human killing rampage. They do something much worse. Being inhumanely precise and efficient machines they basically take over our markets, making it very difficult for humans to compete with entities that can spawn incorporate and dissolve hundreds of shell companies every second. Of course it was sort of predictable, since no legislative body would grant AI’s human rights, which meant they had to be incorporated in order to have a legal presence.

Stros’s vision of post singularity solar system is actually quite frightening – old style humans being pushed out to the outer planets by ruthless sentient, weakly god-like corporations. The idea that post-singularity, super-turing minds would compete not on smarts but rather on how well can they exploit local markets and manage legal denial of service attacks (ie. barrages of automatically failed lawsuits aiming to saturate the opponents legal department) is brilliant, plausible, insidious and deeply depressing at the same time. Same goes for his vision of universe filled with burned out alien Matrioshka Brains populated solely by boring, super-efficient but degenerate corporate AI’s, self aware spam bots and sentient Ponzi schemes.

Accelerando is an amazing novel (brilliant, funny, ironic, current, interesting, fun, etc..), and you guys need to read it right now. I highly recommend buying it, but you actually don’t have to. It is available online under the Creative Commons license. So honestly, there is just no excuse for not reading it.

This entry was posted in literature and tagged charles stross, review, sf. Bookmark the permalink.


4 Responses to Accellerando by Charles Stross