I have many complaints about The Witcher: the combat system sucks, the UI is poorly designed, the movement and character animation is glitchy, the writing and voice acting leaves a lot to be desired, the plot seems to be an endless chain of fantasy cliches and the main character has about as much personality as a slab of granite. But if there is something the game done right, it is the way buffs from potions work. They are designed to work for a long time.

In my previous post, I compared Witcher’s alchemy interface to that of Oblivion. I still think that Bethesda game has a superior UI, and larger variety of potions you can make but the Polish game actually wins on how the concoctions you prepare work in the game. In Oblivion I pretty much gave up on using any type of buff potions – I would make them, and then immediately pawn them off at the nearest store. Restorative potions (healing, magicka regeneration, restore attribute) were very useful – and so were the potions. But pure buffs were useless 90% of the time because of extremely limited effect durations. For example, a typical potion of Night Eye you could purchase or make would last anywhere from 30 seconds up to a minute. Anything lasting over a minute was usually exuberantly expensive and extremely rare. 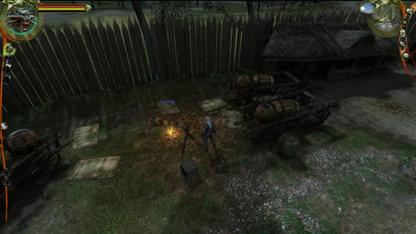 In witcher you can only do alchemy by a fireplace or by resting in someones house. In the wild you actually have to find a fire to sit by. You can't just build one where you are standing.

A minute is not enough time to explore a dungeon though. Hell, it is usually not enough time to last a whole encounter with a room full of enemies. If you are relying on potions for dungeon exploration you better have shit load of them with you, and be prepared to gulp them up at an astonishing pace. Same goes for water breathing potions. 30 seconds is probably enough to quickly swim under some rocks to access a hidden part of a dungeon, but clearly not enough to explore a complex of flooded chambers or a sunken ship. Combat buffs are even worse – you have to drink them in combat. If you drink a potion prior to entering a scary dungeon, you can be sure it’s effects will run out long before you encounter your first enemy. 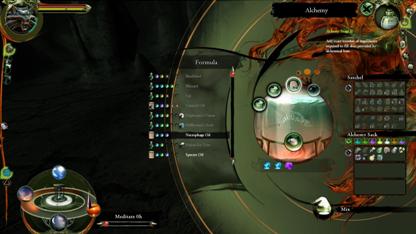 The game actually encourages you to experiment with alchemy, but the interface does not make this easy.

Potions in the Witcher are quite the opposite. Their duration is usually measured in the in-game hours. For example, the Cat potion (equivalent of Night Eye) would last around 7 in game hours. I had my character drink it just after entering a crypt overrun with Ghouls. I proceed to fully explore the crypt, clearing it out of any hostiles, then went back out, turned in the quest, then took a wrong turn and found a cave of some sort. Upon entering it, I realized I still had the “see in the dark” effect active. Furthermore, there were several in game hours left before this effect would wane.

That’s how it should be done folks. Heroes should be able to “juice up” before a big battle – not during. When your character gets drunk, he should remain drunk for the remainder of the night. There is one mission in the game where a guy hires you to kill some overgrown monster plants in his garden, but he insists that you drink with him as you negotiate the price. When you finally agree upon a contract, Geralt is so wasted you are essentially seeing everything double, and stumbles around at half speed. This state doesn’t just go away after a few seconds though. I cleared out the guys garden, collected my payment and then decided to head out. I got halfway towards the village I decided that stumbling around while drunk is pointless, and that it would be faster for me to just sleep it off and continue adventuring the next day. So I stumbled back to the guys house, and collapsed on some sort of a sleeping roll he had laid out on the floor. 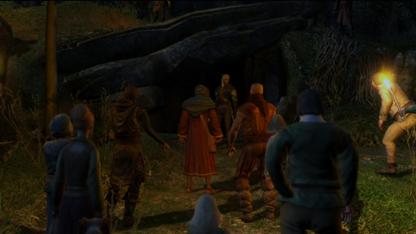 I really wish there was a potion that would make all the voice acting in the game better.

So yeah – the game has at least one redeeming quality. I’m actually finding more of these as I play. The game is slowly growing on me, and as I learn to ignore it’s obvious flaws, and plot deficiencies. Now if I could only find an option that makes Geralt’s voice actor to do that whole acting thing when you don’t speak every sentence in the same exact monotone voice, that would be great. I’d also love a button that would stop NPC’s from fidgeting while they talk to me. It’s seriously weird when halfway through the sentence they suddenly start looking up at the ceiling, or become fascinated with their feet.

Did this ever happen to you? Did you ever encounter an average game with one feature that was kinda-sorta cool? You felt that the feature didn’t really redeem the game, or anything – but you thought it was a good idea, and wished other games used it?

This entry was posted in video games and tagged the witcher. Bookmark the permalink.