The Witcher: More Reflections on the Game

Basically I have two reflections about the game. Note that this post may contain mild spoilers for the first act of the game.

After playing the game for a while I noticed that the developers really put a lot of attention to the small detail in the game. Let me give you an example. In the beginning of the game you are stuck in a small village due to a plot driven door. At first this is not apparent, but the randomly generated villagers that inhabit it actually have daily schedules. I saw some people repairing an old shack, a woman feeding the chickens, a farmer sowing the fields and etc. When you walk around the countryside you will sometimes scare up flocks of birds that take flight, or run away (in case of geese and chickens). Households have dogs that run around playing or sleeping. The inn has a resident cat that seems to roam around, but prefers to sit on the window ledge. At night villagers disappear into their houses and homeless people and beggars congregate around camp fires. 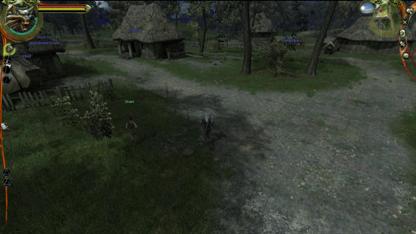 Well... The level of detail would probably be more visible in the over-the-shoulder mode. Sadly that mode is badly broken with respect to combat, so you get high-isometric mode screenshot instead.

One interesting feature I noticed was how the doors were handled. This is possibly the only game I have seen in years where NPC’s actually open doors and walk through them. In Oblivion for example, characters would just sort of fade out and disappear when traversing a door or a gate. In The Witcher everyone other than you actually grabs the handle, swings the door open and goes inside. It is a little thing, but it really adds to the experience. The attention to such minutiae detail is impressive to say the least.

My other reflection is that everyone in this game seems to be a total dick. And it’s not just to you. That would actually be quite normal. It is sort of a video game thing – protagonist must often take a great deal of shit from NPC’s who are rude and condescending for no reason. At least in this game people have a reason to talk shit to you – you play an inhuman abomination – a mutant twisted by alchemy to give him super human abilities. You are different and people have reasons to be scared of you. Especially since witchers have a bad rep – folk stories paint them as tricky, greedy violent monsters. So I expected to be called names and have doors slammed in my face.

That’s not the point I’m making. In this game, every NPC is a horrible person. Everyone has skeletons in their closet. There are no good and virtuous people out there. Everyone gets their hands dirty. In that aspect, the game is true to the source material in which the morally ambiguous Geralt, a deeply flawed anti-hero usually turned out to be a better person than the honorable knights, reverent priests, wise kings and innocent maidens he met on his way.

Let me give you an example. When you reach the first questing area, people will tell you to go visit the local Reverend. Now in most fantasy games, when you get sent to see the Reverend or a priest you end up meeting a nice, wise old man who dishes out sage advice. You know – the kind of genuinely good, down to earth religious leader who takes care of his flock, helps them out and etc… Instead I met this guy: 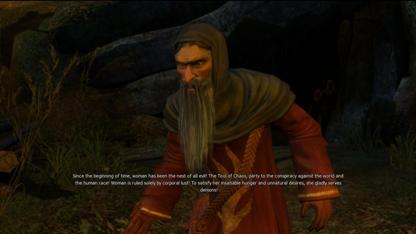 I expected to meet a patient, thoughtful man at peace with himself. I found a bitter, angry close minded old man with short temper. He greeted me by calling me a few choice names to establish his moral superiority, then angrily lectured me on scriptures trying to scare some faith into me. Further conversations with shown me that he loves to abuse his position, throwing around blame and guilt. He tends to find heresy and offense to his faith in everything he does not approve of. And while he points out the sins of everyone else, he is himself guilty of quite a few nasty things. For example he has been known to take in orphaned children and then sell them to the local bandits for profit. This guy is the spiritual leader of the community.

It was a bit refreshing to visit this uncharacteristically gritty fantasy world. Of course after a little while it became a bit tiring – I really wanted to meet someone nice and genuinely decent for a change. But every time an NPC like that popped up, I would eventually find out that he or she was just as dirty as everyone else. In fact the only semi-decent people out there seemed to be the dregs of society. The priests and people in power were all corrupt, greedy, bitter and rotten to the core. The whores, witches and criminals who lie, cheat and steal on a daily basis often turn out to be the only people who actually have some empathy or compassion left in them.

Strangely realistic. Then again, sometimes the game takes this grittiness and “realism” to its extremes. For example, pretty much every named female NPC will sooner or later jump into your bed. And it’s not like in Dragon Age or Mass Effect where you have to court them and develop your relationship. It’s just like “Hey, you want to do it and then get an achievement card with my n00d picture? Y/N“. 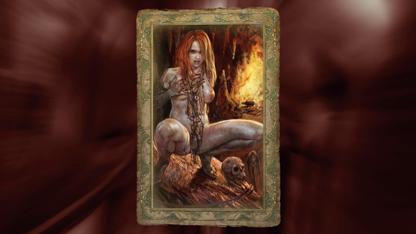 Ok, so I will now tap my Witch to cast... Oh wait... I already tapped her... Last night. Wink wink, nudge nudge. Sigh... I now hate myself for doing this joke.

The whole collectible card thing seemed a bit juvenile to me. I mean, I found the relationships in Mass Effect and Dragon Age much more meaningful because… Well, they were relationships. You had to talk to your party members and sort of seduce them. The whole thing felt more organic and natural. I’ve been only playing for only few hours and Geralt got laid more times than Commander Sheppard and my Dragon Age characters across all my play-trhoughs through the two BioWare games. And I didn’t really care about any of the NPC’s he slept with. In fact, I got totally bored with the whole womanizing aspect of the game. I just clicked through the dialogs to see whether or not the next card will be more ridiculously over sexed than the previous one. They usually were..

There is that and the language thing. I’m not sure how to put it, so I’ll just say this: the language in the game is sometimes unnecessarily flowery… I mean, I don’t mind using fucking expletives here or there for emphasis. But The Witcher actually made me laugh several times due to random, rapid fie barrages of crude language out of nowhere. For example I was talking to a dwarf smith, and asked him some stupid question and his answer was along the lines of “What the fuck do you think? It’s like fucking asking me if fucking dicks go into bleeding cunts. Of course I can make that fucking item!” I’m paraphrasing here, but the core (you know, with the dicks and cuts) is pretty much verbatim from the game. And this is in just a casual conversation mind you. Just shooting a breeze. I’d probably find this soft of thing hilarious if I was 12 years old. Now it is just hilariously random and ridiculous. Eh…

What do you think of the grittiness and random crudeness that pops up here and there? Was it to much? To little? Just enough? Did you enjoy the “collectible card game” at all?

I’m estimating I’m about half way through the game at this point – try not to spoil my end game.

This entry was posted in video games and tagged the witcher. Bookmark the permalink.


5 Responses to The Witcher: More Reflections on the Game