I honestly don’t know how I missed this movie when it first came out. Actually I think I know – I believe that 1998 was the year when I moved to US and tried to figure this crazy place out. Which is likely why I have never even seen a trailer for it. I grabbed it because several people told me that it is a pretty decent movie. I think it was also recommended in one of the movie threads on this very blog. Turns out the people who were telling me to watch it, were right.

Let me give you an idea of how it starts: a guy wakes up in a hotel room bathtub with no memory of who he is and what happened. As he gets out of the tub, he notices there is a dead girl lying next to the bed – all bloody and cut up. The phone rings, and the guy on the other line introduces himself as his doctor. He tells him that the memory loss is a result of an experiment that went wrong, and that he can explain more later. He tells him to leave the hotel right now as there are people coming for him. As he exits the room and goes into the lobby the clocks strike midnight and everyone in the building (except him) inexplicably fall asleep. Then these guys show up and tear up his room: 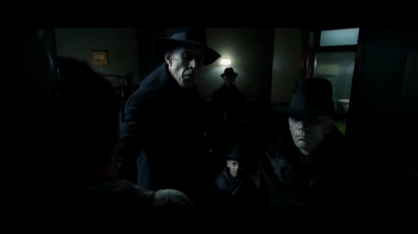 And it only gets stranger from there. The picture has a distinctive film noir vibe to it, but it very consciously plays with this convention. For example, there is a very good reason why the streets of the city are always dark and gloomy, and why everything always seems to happen at night. The mystery surrounding the main character’s lost memories and the nature of the titular city itself unravels slowly with a few surprising twists. The final revelation takes it into a territory that I consider a bit campy. Actually, scratch that – the whole movie is a tad bit campy. But the camp factor seems to be very in-line with the strong art direction and overall vision. So in a way it is campy in the same way Brazil might have seemed campy – though don’t get me wrong, this film is nowhere near as brilliant as Terry Gilliam’s masterpiece. It’s just that some of the campiness and kitsch was probably intended (then again, some of it was most definitely not).

Without getting too much into spoilers territory I will say this: the reason why Strangers are doing their experiments is incredibly silly. Seriously, I could have came up with a much more complex and interesting sounding reason all the way back in 1998. It’s so simplistic, so cliche, and oh so naive that it actually made me chuckle. But it does not ruin the movie since it’s main strength lies elsewhere. It’s all about the style, and the way the story is told. And that is done well. 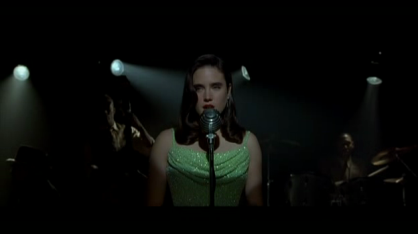 The city itself is realized very well. It is not photo realistic – you know you are looking at set pieces and models, but you can’t help but love the style and attention to detail. And then you realize that there is a reason why everything looks slightly fake and artificial (because it is). The story is told fairly well, and has a good timing but the acting is sometimes a bit grating. For example Kiefer Sutherland sounds like a bad comedian trying to do a William Shatner impression and getting it horribly wrong… Except when he forgets and starts speaking normally for a scene or two. There is also a scene in there with two extras playing a husband and a wife having supper – they are both so spectacularly bad that they made my teeth hurt. 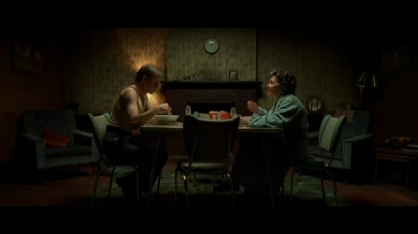 Two worst actors on the planet.

But I guess this is pretty much Alex Proyas’ trademark: great style, great timing, good storytelling masking a weak script and lackluster acting. This is sort of the ongoing theme in all of his work. He has good ideas, great visual style and a knack for telling stories – he just seems to need help ironing out the details and bossing the actors around a bit more.

Dark City is a good movie. Not the greatest film you will see, not the deepest one, but solid entertainment nevertheless.