Every once in a while there comes a book that can’t be labeled anything other than awesome. Anathem by Neal Stephenson is one of such books. I must thank Alphast for recommending it in one of the book threads. This is one of the great things about this blog – I often get great recommendations like this from the commenters. I added it to my wish list, then picked it up, and loved every page. 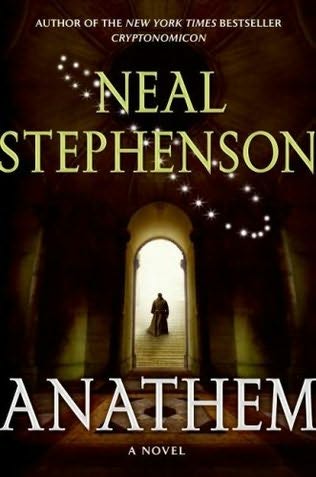 The story takes place in an alternate universe, on a planet Abre where life and human civilization evolved in a way much like ours. The main difference is their history and culture. One of such differences is establishment of the “mathic system”. On Abre there are no universities, and most of the population is borderline illiterate. Children receive minimum amount of schooling that will allow them to read klingrams (a simple pictographic alphabet) and train for a trade profession. Those who want to pursue education in arts and sciences however must seek it in monastery like institutions known as maths. When one joins a math one must forswear and his property, and all contact with the outside world for the duration of the stay, with exceptions for special holidays known as Aperts. Math dwellers known as Avout live as austere monks completely segregated from the outside world. Each math is completely self sufficient and independent from the secular world. In fact, they are treated almost as their own sovereign states – with their own laws and ways of policing their members.

Avout recruit new members and exchange knowledge only during Aperts which are celebrated at different intervals depending on the type of a math. For example Unarian maths celebrate it anually, Decenarian ones every ten years and so on. The highest and most prestigious of maths are the Millenarian maths which open their gates only once in a thousand years. Because of this seclusion a Math can often see a city grow beyond it’s gates, thrive, and then depopulate, become abandoned and overgrown with vegetation – all happening between Aperts.

Unarian maths often function as our universities. It is common for people to join them for a few terms to gain classical education and then return to secular lifes. Most other math types however attract those who have decided to devote their whole lives to scientific research and pursuit of knowledge. Anathem follows the misadventures of a group of young members of a Decenarian Math who stumble upon a discovery which will change not only the Mathic world but the whole Abre forever. Saying more on this would probably be spoilish, so I will stop here.

Stephenson’s book combines some action, some suspense and even a bit of romance with a very large helping of science and philosophy. The characters spend most of their time discussing their work, or talking about philosophy, metaphysics, theology and more – usually in the form of an academic dialogues in which the participants are trying to logically deconstruct each others arguments. All of which are based on real and existing works of philosophers – mainly Edmund Husserl and Kurt Gödel. In the foreword Stephenson actually mentions he has considered annotating his novel with copious amount of footnotes but then decided against it because he thought that it would break immersion for the readers. So he cleverly disguises these ideas by attributing them to Avout saunts – which are a bit like a mix between saints (but without religious undertones) and Nobel prize winners (as in distinguished and brilliant thinkers whose contributions shook the Mathic world). Some of the stuff Stephenson brings up is really heavy, and it will stay with you for days. You know how sometimes you read a book and it does something to your mind? It causes some gears to switch tracks, and makes you look at things in a new way? This is one of these books. It blew my mind. Maybe not as much as VALIS did (I always tell people that VALIS is not a mind fuck, it is a brutal gang rape of the mind) but the experience was much more structured and enjoyable.

Even if you don’t find the meta-philosophical discussions fascinating (I do, I think they were the best part of the book), they do a great deal to establish and ground Stephenson’s characters. You really have a feeling that they are really the kind of people who would join a Math if it existed. Analytical, pragmatic, educated – always approaching real life problems as puzzles that can be figured out and fixed by applying the right theoretical principles.

For one, the Mathic system as described by Stephenson really appeals to me. While I’m not keen on hard physical labor and the austere life style, the idea of living among people who all decided to devote themselves to the pursuit of knowledge sounds incredibly appealing. This is precisely why I loved academic life so much – because I could spend most of my day hanging out with people who were much smarter than me, having interesting intellectual debates and limit the amount of interaction with stupid, knowledge-hating plebeians down to the minimum. But of course a great number of people go to college just to party and after 4 years get a piece of paper that says they have learned something even if they didn’t. Mathic system seems to promise a much more pure academic experience.

I guess what I’m saying is that I would join a Math if one existed. Well, maybe. The whole thing about not being able to see your family for X amount of years kinda sucks. Otherwise though, it would be grand. Would you become an Avout if you could?

Stephenson also coined my new favorite word: panjadrums. In Anathem, this is how Avout refer to the clueless, under-educated and overwhelmingly ignorant secular politicians, rulers and/or decision makers. It is mostly a derogatory term and I’m stealing it, planning to use it to describe all real world politicians and decision makers from now on.

Go read this book. It is definitely one of the best novels I have read in a while.

This entry was posted in literature and tagged neil stephenson, review, sf. Bookmark the permalink.


8 Responses to Anathem by Neal Stephenson