The City and The City

The City and The City by China Mieville is one of the more remarkable books I have read this year. At it’s core, it is a well written detective story but it is much more than that. It takes place in one of the most imaginative and best realized settings I have seen in print. I really don’t know how to talk about it without spoiling it a little bit. Let me put it this way: half the fun of reading this book was discovering what the setting was all about. It is sort of the “other mystery”. On one hand you have a mysterious murder, and on the other hand you have the starkly original, crazy city in which it was committed – a city that is different from anything you have seen before. So the less you know about the setting, the better. So it will suffice to say that the book is great, and I highly recommend reading it. If you don’t care about some minor spoilage, and you want to find out why I liked it so much keep on reading. Keep in mind that I won’t mention any spoilers central to the plot – I’m just talking about Mieville’s intriguing setting and its rules.

The novel is essentially is a story of two small city states: Beszel and Ul Qoma, which author places somewhere in Europe (although the exact location is never mentioned). The peculiar thing about these two nations is that they both occupy the same geographical location. No they are not neighbors. They are literally on top of each other. They are intertwined. Their geography is a complex maze of “total” areas which belong to one of the cities or the other, and crosshatched regions which are shared by both. To a foreign visitor, Beszel and Ul Qoma look like a single city but the locals are trained from birth to respect the arbitrary restrictions between the two nations. To reinforce this, each city maintains a unique architectural style, fashion sense, language, culture and even quinine. 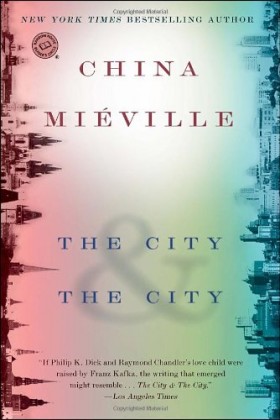 There are no physical borders between the two states. Once could simply find a cross-hatched street, take one wrong step cross from Beszel to Ul Quoma. But such person would be committing a breach. The arbitrary permeable borders of the two cities are policed not by the local law enforcement but by shadowy, mysterious organization know as Breach. No one really knows who these people are, and how they operate. As long as the cities existed, there was always Breach. One thing is certain: if you cross the border between the two cities, Breach will come to get you. Dark cloaked figures will appear out of nowhere, grab you and take you somewhere else. If you happen to be on a tourist, or a foreign visitor, Breach will probably drop you off at the nearest police station. You will then be escorted to the airport, and put on the first plane out of the cities, and your visa will be revoked forever. If you are a local though… Well, locals don’t come back. They are taken away never to be seen again.

At the same time, everyone breaches in small ways every day. Sometimes you can’t help but smell a whiff of Ul Qoman cuisine while walking a cross-hatched street in Beszel. Sometimes you accidentally bump into someone from a different city. In most cases such small transgressions do not cause Breach intervention. But they might. This is why locals learn early on to “un-see” and “un-hear” their neighbors from the other city.

How did the two cities get this way? No one really knows. Historians claim that both cultures can trace their roots back to common ancestors: a civilization that existed in that geographical area in the ancient times, and which left behind strange other worldly ruins and mysterious clockwork artifacts. Then something happened and the cities broke apart into the two nations they are today. The nature of that fracture is unclear. Most of the time Mieville is purposefully vague on how the two cities are configured with respect to each other. Sometimes it seems that they are sort of super-imposed: that the total and alter areas are sort of pocket dimensions that co-occupy the same space and are joined by cross-hatched areas. Other times it seems that the borders are rather mundane, local convention, and that there is nothing supernatural behind them.

Either way, the setting is fantastic, and the author really put a lot of work into making this irrational concept completely believable. If nothing else, the book serves as a fascinating study of arbitrary cultural taboos, and how people deal with them. How they require a sort of controlled insanity. The way citizens of both cities deal with their unique condition is sort of reminiscent of Orwellian concept of double-think. They are forced to un-see and un-hear certain things – at least officially.

This is an amazing book and I can’t recommend it strongly enough. It has an incredibly original concept, interesting plot and a very, very unique setting. There is just nothing like it out there. I really can’t tell whether I liked City and the City or Anathem better but I can probably tell you that these two are currently among my favorites. If Stephenson’s epic story was to dry for you, give Mieville a try. His story is much shorter and much more action packed and fast paced – but in many ways just as mind blowing.

This entry was posted in literature and tagged china mieville, review. Bookmark the permalink.


9 Responses to The City and The City