New Vegas was built around the same engine as Fallout 3 so unsurprisingly it looks, feels and plays like it’s predecessor. I do believe that Obsidian did mock around with the graphical layer of the game, because it feels slightly more choppy, though I really can’t see much visual difference between the two games. Then again, I am not the kind of person who would get excited or for that matter even notice a new, better way to make water seem more watery and light blooms more bloomy. Most of the time I am oblivious to that kind of stuff. What I did notice though was improvement in the game setting. 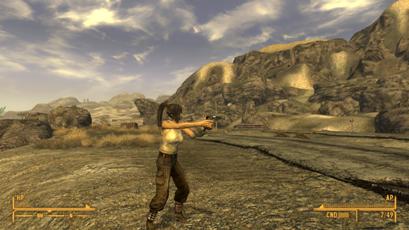 I used mods to get the hair to look like that.

As of writing this post, I have been playing the game for about 3-4 hours, and have not left the starting town yet but I can already tell you that Obsidian addressed the most egregious criticism of Fallout 3. New Vegas actually does feel like it is set few hundred years after the war. People actually do take time to clean up their houses from the rubble (well at least in some areas). Pre-war food is still disturbingly ubiquitous but Obsidian does go out of its way to show that the citizens of their game world do supplement their diets with contemporary foodstuffs. For one, there are more things to eat out there in the world than the canonical squirrel on a stick. I even encountered an NPC that lampshaded the food situation expressing a disbelief at the fact some people actually eat the 200 year old relics. Best of all, one of the very first things you see when you start the game is a guy tending a garden outside of his house. It all adds up.

I was pleasantly surprised that most food and water in the starting area was not radioactive the way it was in F3. Yes, the radiation in F3 was a game mechanic but also a logical inconsistency. I always wondered how inhabitants of Capital Wasteland managed survive more than few years with all their food and water being contaminated. Did they just pop Rad-Away all the time? NV setting is much more logical: people tend to settle in areas with little or no radiation, make and grow their own free food, and tap into clean water sources. Radioactive areas are usually abandoned places inhabited by mutants, and full of artifacts of the bygone era. This works very well for me. 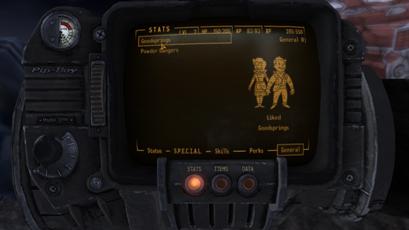 The game still uses a silly karma system, but at the same time Obsidian implemented a reputation system. Doing quests for certain factions will put you in their good graces, but at the same time you may get on somes shit list for aiding their enemy. Allegedly your reputation score is more important than your karma score which sounds encouraging. There was just nothing worse than a F3 punishing you for stuff like stealing stuff from abandoned house while no one was around to see it. This still happens in NV but hopefully the reputation system will be able to offset it.

Another element of the game I really like is the hard core mode. Obsidian basically implemented that old food/drink/sleep mod from Fallout 3 as an optional core game mechanic. You can enable it when you create your character, and disable it at any time from the option screen. But while it is on, you need to keep your character well fed, well rested and hydrated. Failing to do so will result in temporary lowering of your stats, and eventually in death. The 3 counters work exactly the same way as the RAD counter does: they start at 0 and slowly creep upwards. The thirst counter is the quickest to rise, but also the easiest to reduce: all you need to do is to stop by a sink, toilet, or a puddle and take a gulp every once in a while. Sleep counter is the slowest one, and you can actually pull several in-game all-nighters without running it to high. I sort of wish that these counters were somehow incorporated into the HUD though. I man, your character should instinctively know how hungry, thirsty or sleepy he is. But I’m not complaining. It is a nice addition and I enabled it without even hesitating for a second. 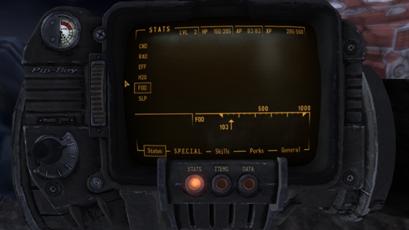 The food counter in hardcore mode.

Character creation however still sucks. I’m sort of disappointed that Obsidian did not spend more time on creating good looking PC faces. A lot of their NPC’s are actually fairly well designed. They are as good as you can make them with Bethesda engine I guess. But the default preset faces are beyond ugly. Whats worse is that the face generation takes place on a poorly lit computer terminal screen. The game allows you to re-color your face, and change the light/shadow dynamic up to your liking, but it fails to tell you that once you that your face is actually never going to look the way you designed it. The dynamic light in the game world plays havoc with the color balance on the facial features, and 80% of the time any adjustments in the “tone” section of the character designer will result with your face looking like a clown the second you step outside. But I guess that’s where the community comes in. You can fix the face problem by installing one of the many face/hair/eye mods that are already available out there. 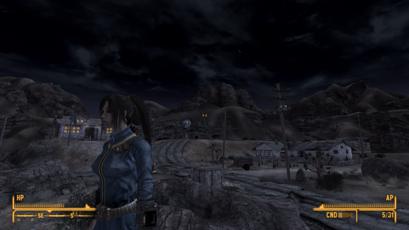 All in all, it seems an improvement over Fallout 3 and I think I will enjoy playing it. Is it buggy? Oh, you better believe it is. But then again, I knew it was going to be this way. I mean, New Vegas is a project made by Obsidian using a Bethesda game engine. If there are two companies out there that positively excel at releasing buggy, unpolished games it is these two. But I will leave my bug complaints for another post.

This entry was posted in video games and tagged fallout, fallout new vegas. Bookmark the permalink.